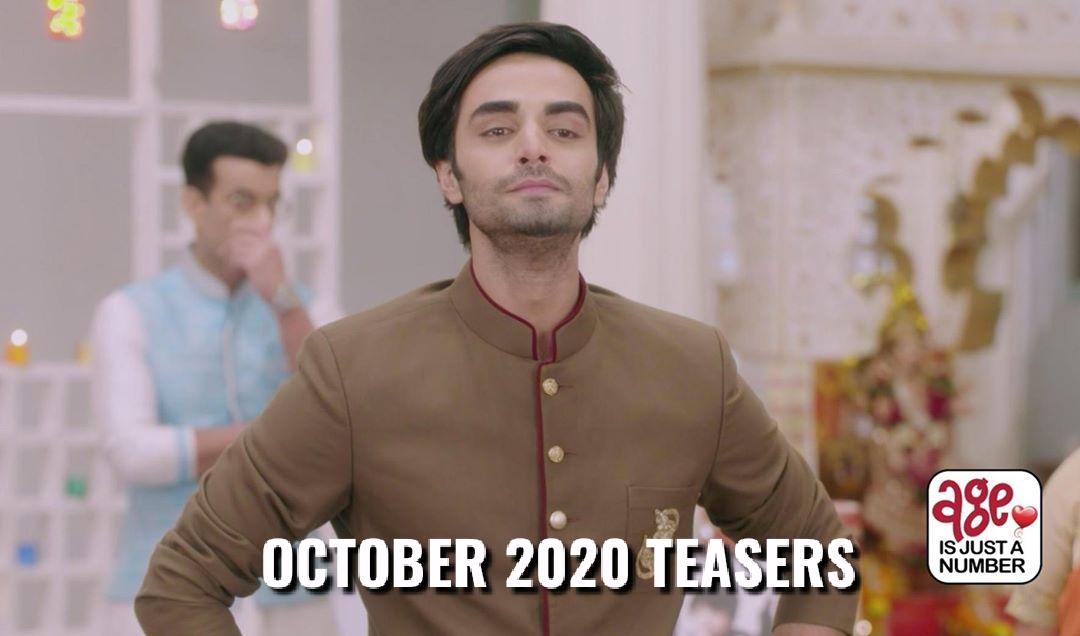 Age is just a number October teasers: Pankit entrance breeds more trouble for sahil and Veedika, can they survive this new attack?

After seeing sahil and Pankit in a compromising situation, Vaidiaka leaves the Agrawal house with Ved and her new born baby despite objection from all.

Badiamma sends Pankit out of the house meanwhile Sahil goes to beg vaidika but gets himself arrested for disturbing the neighborhood. Guddu comes back to beg Arya.

Sahil stays out the whole night outside vaidika house trying to convince her but ends up in the hospital and is diagnosed with apendix.

Vaidika is arrested after the city women accuse her of trying to burn Pankit with hot oil. Bimlaa is actually behind the act.

Sahil comes to her rescue despite his condition. Pankit is still missing and Sahil promises to find her so she can testify on behalf of Vaidiaka.

Ved undergoes a successful operation, everyone is happy. Prachi tells Puneesh she is pregnant and Pankit result comes out revealing that she had sahil had been intimate.

Vaidiaka refuses to reconcile with sahil after the report. Meanwhile prachi meets her husband in jail and tells him she did a fake report.

It’s sahil and Vaidiaka new born naming ceremony. Vaidika sends a divorce papers to Sahil while Sahil sneaks in and ‘kidnaps’ his son. The couple are at loggerheads.

Sahil signs the divorce papers and later it is revealed that Aarya had sent the papers while trying to look out for her mother. Sahil and Vaidiaka have 15 days to stay married.

Puneesh escapes prison and disguises himself as a Punjabi. He ends up saving Sahil and family from an accident and then enters into the Agrawal house.

Vaidika and Pankit gets into a heated argument and Sahil is for forced to almost raise his hands on vaidika, is this the end of their relationship?

Ved arranges a valentine party to bring his warring parents closer. Deepak sees prachi flirting with the pujnabi driver and decides to inform her husband in jail. Pankit seeks a marriage proposal and is more than happy to soon leave the Agrawal house.

Puneesh sabotages Deepak’s plan of reaching the police station. The valentine party does not help to resolve sahil and Veedika difference. Pankit get a marriage proposal but Sahil is doubtful.

Deepak finds out Puneesh is out of jail. Pankti gets ready for her marriage but her mother has other plans.

Sahil comes to Pankit’s rescue and the marriage is cancelled. Veedika has a deadline to marry Sahil or Pankit will step in as his wife, will she be moved?

At the Agarwal mansion, Nani and Bilma are worried about Vedika. They decide to call the police. Meanwhile, Maya comes home with a bad news.

Sahil is excited to take Vedika away on a honeymoon. Bimla is stressed and tells Sahil to delay the trip since she has a feeling that something bad will happen while they are on the honeymoon.

Deepak reveals to the family members that Prachi is having an illicit affair with the driver. Much to Puneesh’s dismay, Prachi reveals that the driver is none other than her own husband Puneesh.

Sahil books a flight to USA while Vedika packs his bags to get Shruti back. Sahil feels sad for Shruti and Karan. Vedika hugs Sahil and gives him courage to stay strong and promises him that she will take care of everything in his absence.

Puneesh Tiwari thinks of using the story of Kamli’s ghost to his benefit, Vedika is adamant to find out the real story and the link with 333.

Sahil hosts a party at home. Vedika locks Ghungru in a room so that he doesn’t disrupt the celebrations. Much to Vedika’s dismay, Puneesh and Sahil get into a fight.

Sahil tries to pacify Shruti. He tells her that Vedika and he will always be there for her. He also asks her to trust life and keep smiling.

Vedika plays a trick on Bimla to force her to reveal the secret of “333”. Will Bimla give in to Vedika’S trick?

The Agarwals are forced out of their luxurious mansion. Will they find new shelter and at what cost?

Sahil is being investigated for his son in law’s murder. Will Vedika be able to prove her husband’s innocence?

Arya vows to find her husband’s murderer and punish them for taking her husband away from her.

Arya is convinced that Sahil killed Guddu and she is determined to make him pay, and Vedika is being punished as well for supporting a purpose killer.

Arya dismisses the cleaning staff at the Agarwal mansion and appoints a family member as a new servant of the house.

Arya is convinced that Vedika is behind her latest attack. Will Vedika be able to prove her innocence and also prove that Sahil is not Guddu’s murderer?

Prachi and Puneesh are working tirelessly to frame Deepak and Shruti. What is their evil plan and how do they plan to execute it?

Arya finds the culprit behind Guddu’s murder. Who exposes the murderer and at what cost?

It has been years since the tragic love story of Sahil and Vedika ended in tears. A new chapter is opened for a 24 year old boy who is about to undego an arranged marriage.