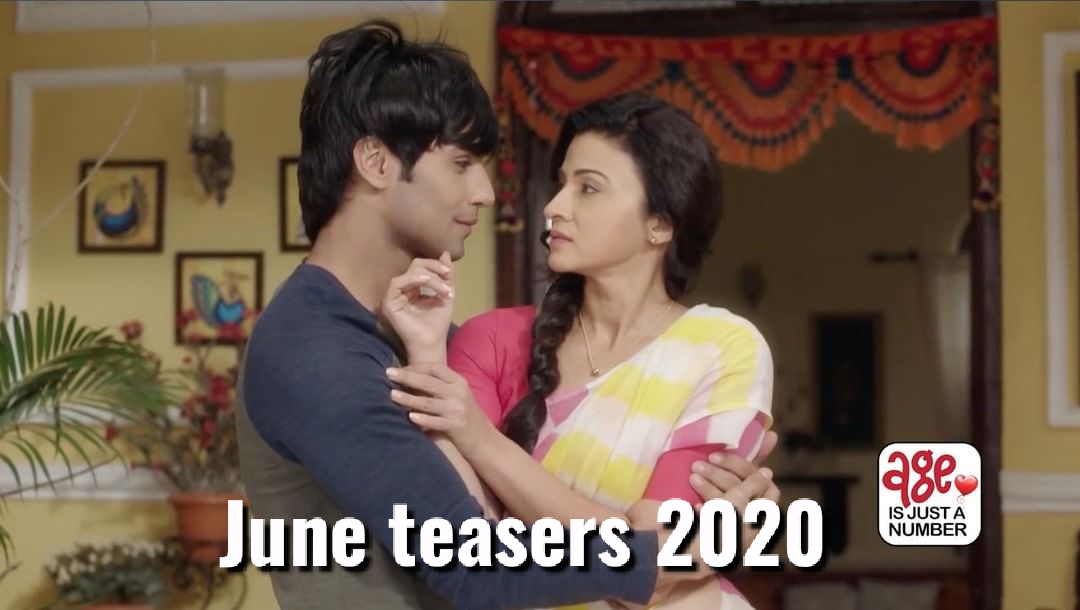 Age is just a number June teasers 2020 Zee world: Vedika gets a marriage proposal but Sahil is determined to fight for her love despite all opposition. Vedika discovers Puneesh’s dirty little secret that might destroy his life and expose him as a fraud in front of society

After much pleading, Vedika allows Sahil back into the house. Sahil confesses to Karan that he is in love with veedika. In a new twist Bari Amma arrives at Veedika doorstep with her luggage.

Vedika is labelled an enemy by her in-laws for ruining Nishi’s marriage plan, but once again and Sahil comes to the rescue and saves her from embarrassment. Meanwhile Sahil is eager to express his romantic feelings towards Vedika.

Badi Amaa is conspiring against Vedika. And if her plan is successful Vedika will be left houseless. Sahil is determined to save Vedika from humiliation and save her house from being taken away. Vedika is angry at Sahil for mingling in her affairs.

Bimla Agarwal is determined to bring Sahil back home and she goes to Vedika to ask for her help. Nevertheless Sahil has one condition for Vedika if she wants him to go back home to celebrate his birthday with the Agarwal family. Will Vedika comply?

Badi Amaa conspires with other women to humiliate Vedika during Sahil’s birthday party ceremony. How will Veedika face this humilation?

Gautam has a marriage proposition for Vedika and her mother is excited that she will have a rich man as her son in law. Will Vedika accept Gautam’s proposal?

Vedika agrees to marry Gautam but Sahil is eager to fight for Vedika and save her from making the biggest mistake of her life. Gautam sees Sahil as a threat to his marriage to Vedika and he has plans of his own to remove Sahil from Vedika’s life.

Vedika’s daughter Arya has been kidnapped by unknown civilians and Sahil is ready to put his life in danger in order to save Arya and re-unite her with her mother. Guatam sees Arya’s kidnapping as an opportunity to win Vedika’s trust after rescuing Arya.

Vedika’s wedding is scheduled to be in four days’ time. Sahil is heartbroken and he is willing to accept defeat, Maya wants Vedika to fight for Sahil and their special love. How long will Sahil stay away from his beloved?

Puneesh informs Gautam and Vedika that he wants their weeding to be held at the Agarwal mansion.  Vedika isn’t happy about the arrangement because there’s bad blood between her and the Agarwal family, including his beloved Sahil.

Vedika tries to call off the wedding but Gautam is not willing to accept that Vedika is not in love with him. Gautam threatens to kill Arya if Vedika calls off the wedding, Sahil is attacked by Guatam’s thugs and he is badly injured. Will Sahil survive the injuries and stop the wedding from proceeding?

Gautam is arrested for threating to kill Arya and for kidnapping his wife and kid. Sahil informs his beloved Aunt Bimla that he will marry Vedika Mathur, Bimla blackmails Sahil in an effect to stop him from marrying Vedika.

Sahil, a rich young man, falls in love with Vedika, an older woman wwho initially rejects his advances but feels conflicted after she gets to know him better.

Vedika discovers Puneesh’s dirty little secret that might destroy his life and expose him as a fraud in front of society. Vedika has a choice to make, either she exposes Puneesh’s secret which might hurt an innocent young woman in the process or just let Puneesh off the hook.

Sahil goes public with the information that will prove Vedika’s innocence but Puneesh has made plans that will make Vedika leave Kampar for good. Will Sahil re-unite with his beloved Vedika Mathur?

Vedika Mathur escapes police custody and goes after Sahil’s kidnapers. Will Vedika save Sahil or will she die trying?

Sahil proposes to Vedika Mathur and she says yes but Bimla Agarwal is not willing to accept Vedika as her soon to be daughter in law. What will Bimla do to stop the wedding from happening?

Vedika Mathur tricks Sahil into getting married with some else under the pretence that he is marrying her. What will Sahil do when he finds out that Vedika fooled him?

After being tricked into getting married to Nidhi, Sahil is not willing to accept Nidhi as his wife and refers to Vedika as his wife instead.

Sahil owns 50% of Vedika’s house after acquiring house shares from his brother in law. Bimla forces Sahil to live with Nidhi under one roof at the Mathur household. Will Sahil agree to stay in the same room with Nidhi?

Sahil enters a dance competition with Vedika and the Agarwal family are angry at Sahil and they are doing everything in their powers to stop them from participating in the competition.

Sahil helps Vedika secure a teaching job from home after convincing the parents to take their kids to Vedika for home schooling, but the Agarwal family are leaving no stone unturned in their effort to make Vedika suffer financially. Puneesh is cooking up a plan that will leave Vedika moneyless.

Sahil is accused of trying to kill Nidhi by pushing her down the stairs and now he is under investigation, Vedika will leave no stone unturned in an effort to save Sahil from a prison sentence.

Nidhi’s mother presents Sahil with an ultimatum to follow for Nidhi to drop charges laid against him. Vedika goes to the edges of the world in her efforts to save Sahil from a prison sentence.

A local priest prophets Sahil’s doom and the only way to remove the dark cloud on Sahil’s shoulders is for Vedika to join Sahil in a prayer ceremony. The Agarwal family is not happy with the priests recommendations.

Sahil performs a prayer ceremony with Vedika but Bimla is against the whole idea and wants Nidhi to perform the prayer with Sahil.

Gauri Agarwal is afraid that Deepak will try and determine the gender of their unborn baby and he will force her to have an abortion if she’s carrying a baby girl, because he only wants a baby boy.

Read: next month on age is just a number

Lies of the heart July 2020 teasers

Lies of the heart July 2020 teasers