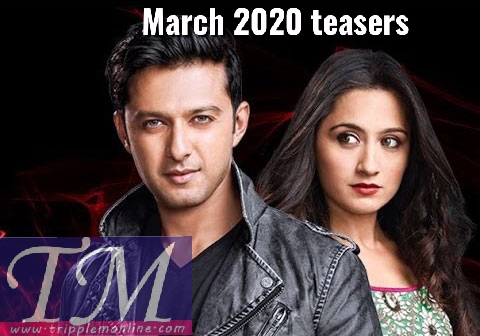 A perfect lie March teasers: Shaurya is paralyzed before his wedding! Meanwhile Dev is getting closer to the truth.

Durga lies to Shaurya that Dr. Dayal is planning to get her married to Neil. An irked Shaurya asks Karan to trap the priest. Meanwhile, Dev learns that Payal was in a rehabilitation centre. He informs the doctor that Payal is his family member, who in turn informs Sakshi about Payal’s whereabouts.

Karan is shocked to see Kangana when he meets the priest in disguise. He informs the priest that his sister wants to wear the jewellery of goddess Durga on her wedding. The priest exchanges the original jewellery with a fake one. Meanwhile, Sakshi goes to see Payal at the rehabilitation centre.

Thanks to Karan, Durga and the Goenkas learn about the priest’s misdeed. Rajnath instructs the police to arrest the priest. The priest recalls his misdeed and apologises. On Shaurya’s insistence, Sakshi requests Durga to marry him. Will Durga accept Sakshi’s proposal?

Episode 110
Durga instructs Aakash to hire an actor from Delhi, to enact the role of a priest. Later, Sakshi asks the jailed priest not to reveal the secret. Meanwhile, on seeing Dev in the rehabilitation centre, the doctor informs Sakshi about the same. What happens when Sakshi sees Dev?

Episode 112
On learning about Sakshi’s displeasure against the wedding, Suchitra informs Rajnath that Sakshi should accept Durga as her daughter-in-law wholeheartedly. Dev is upset about Durga’s marriage with Shaurya. Later, he sneaks into the hospital to retrieve Payal’s records. Will he succeed?

Dev learns that wrong medication was given to Payal, to worsen her condition. Sakshi follows Dev when he visits a doctor to verify Payal’s medical details. Later, Dev meets Durga, and informs her that Shaurya might have raped Payal. Durga questions Dev whether he loves her. How will he react?

On Sakshi’s instruction, a few goons disguise themselves and enter Payal’s farmhouse. They assault the doctor. Meanwhile, Payal is scared to hear the sound of a whistle, reminding her of the rape incident. The doctor informs Durga about the incident.

Durga and Dr. Dayal rush to the farmhouse, where the doctor informs them that he failed to inject Payal with tranquiliser. Durga tries to calm her down, but in vain. Later, Payal becomes unconscious. Meanwhile, Rajnath suspects Sakshi’s intentions. Will Sakshi’s true colours come to light?

Dev learns about the incident and visits the farmhouse. Following the episode, Payal suffers a nervous breakdown. Sakshi learns about Payal’s condition after Dev informs about the same to Suchitra. Later, Sakshi suggests Shaurya to meet Payal. Will Durga allow Shaurya to see Payal?

The doctor does not allow the Goenkas to meet Payal. While Shaurya suspects Sakshi’s hand behind Payal’s condition, Sakshi asks the goons to abscond. Rajnath confronts Sakshi, who reveals she used Payal to stop Shaurya and Durga’s wedding. Sakshi vows to unravel Durga’s truth. Someone overhears her.

Suspecting Aakash’s involvement with Sakshi, Shaurya confronts him. Dr. Dayal motivates a dejected Durga to fight against Sakshi. She vows to take revenge and instructs Shaurya to bring the Goenkas to a temple. What is Durga’s plan and how will Sakshi stop Shaurya?

After taking Rajnath’s permission, Shaurya asks Durga to accompany him to Vaishno Devi. Sakshi confronts Dev for not informing her about Payal’s whereabouts. Meanwhile, Aakash learns that Dev had disguised himself as Shaumik.

On learning about Sakshi’s ploy, Raima suggests Sakshi not to interfere in Shaurya’s life. After Durga informs Sakshi her wish to seek her blessings before leaving for Vaishno Dev, Sakshi tries to stop Shaurya from visiting the temple. Will she succeed? Meanwhile, Durga finds Dev in Payal’s house.

After seeking the Goenkas’ blessings, Durga leaves for Vaishno Devi with Shaurya. On their way, the duo decide to spend the night at a hotel. Meanwhile, Suchitra suggests Dev to move to the US after Durga’s wedding. Later, Raima informs Sakshi that Shaurya might win the bet. What will Sakshi do now?

On their arrival at the hotel, Shaurya books a honeymoon suite for them. He instructs the hotel manager to mix a drug in the food. She informs Shaurya that she had a word with Dr. Dayal. Later, Durga asks Shaurya to take her to a dhaba. What will Shaurya do?

Dev visits Dr. Dayal to learn about the missing pages of Nitya’s diary, but in vain. Meanwhile, Durga takes Shaurya to a dhaba, where he mixes a drug in her lassi. Later, Durga’s associate collides with Shaurya, deliberately. Shaurya has an argument with him. What happens next?

At the Dhaba, few goons, whom Durga had hired, provoke Shaurya to fight with them. They end up brutally beating Shaurya. Durga calls Dr. Dayal and makes Payal listen to Shaurya’s groan. Meanwhile, Dev sneaks into Dr. Dayal’s house in his absence. Will he find the missing pages of Nitya’s diary?

On learning about the attack on Shaurya, Sakshi and Rajnath instruct Durga to bring Shaurya back to Kolkata. The Goenkas visit Shaurya in the hospital, where Durga narrates the entire incident. However, Sakshi refuses to believe Durga. Will Sakshi learn about Durga’s plot?

While trying to get up, Shaurya panics as he feels that his lower body is paralysed. Sakshi continues to suspect Durga’s hand behind Shaurya’s plight. Durga is elated to learn Shaurya will spend the rest of his life on a wheelchair. Meanwhile, Sakshi vows to take revenge on Durga.

Despite his condition, Shaurya remains adamant about winning the bet. He asks Sakshi to find his offenders. Shaurya also tells Sakshi that he knows that she was behind the attack on Payal. Later, Sakshi decides to get Durga married to Shaurya. Meanwhile, Dev tries to speak to Durga, but in vain.

Sakshi criticises Karan and his friends when they visit Shaurya in the hospital. Meanwhile, Rajnath visits the priest in jail, who informs him that he predicted Durga’s future on Sakshi’s insistence. Later, Dev is delighted to see Payal respond to him.

Durga is elated to see Payal respond to her. Dev confronts Durga about Nitya’s whereabouts. She hesitates to reveal the truth to Dev, who is also curious to learn about the secret room in Durga’s house. Dev vows to learn the truth before Durga’s marriage. Will he succeed?

After searching Nitya’s house, Dev manages to find his locket. Later, Dev sees Mr. Agnihotri, who presented Payal’s case in the court, with Karan and grows suspicious of him. Mr. Agnihotri recalls selling a video footage of Payal’s rape to the Goenkas for Rs. 15 crore. Will Dev procure the video?

Sakshi learns that Shaurya spent time with a social worker and informs the same to Rajnath. Meanwhile, Durga decides to reveal Rajnath’s illicit affair with Raima to Sakshi. Later, Sakshi meets Karan and asks him to break Shaurya’s confidence. Will Shaurya think he is not fit to get married?

The Goenkas start preparations for Durga and Shaurya’s wedding. Kangana asks Dev to help her for the same, but in vain. Meanwhile, Karan persuades Shaurya not to marry Durga. However, Shaurya is upset when Durga offers him flowers.

Durga learns about Payal’s absence from the rehabilitation centre and panics. Dr. Dayal and Durga reach Payal’s house where they see her with Dev. The duo confront Dev for bringing Payal out of the hospital. Meanwhile, Dr. Dayal informs Sakshi to postpone the rituals for half an hour.

Episode 138
Dev questions Durga for visiting Nitya’s house in search of Payal. Dev suggests that Payal should stay in her house to ensure speedy recovery. Meanwhile, Shaurya has a nightmare, and falls off his cot. Will he stand up on his own?

Shaurya’s condition continues to frustrate him as a few guests mock his condition. An irked Shaurya leaves the rituals halfway and returns to his room. Shaurya recalls Sakshi and Karan’s suggestion of cancelling his wedding with Durga. Will Shaurya change his mind and call off the wedding?

Episode 140
Kangana wonders where Payal’s family used to reside. Raima confronts her ex-husband for not giving alimony. Dev vows not to visit the temple, if he fails to find out the truth about Nitya. Durga and Dr. Dayal brief the fake priest and Aakash about their plan. Will their plan succeed?

Episode 141
Dev believes that Nitya is alive. Meanwhile, Karan bets with his friends that Shaurya’s wedding will be cancelled. He provokes Shaurya not to get married. On seeing an elated Durga, Shaurya grows suspicious. Later, Shaurya refuses to marry Durga.