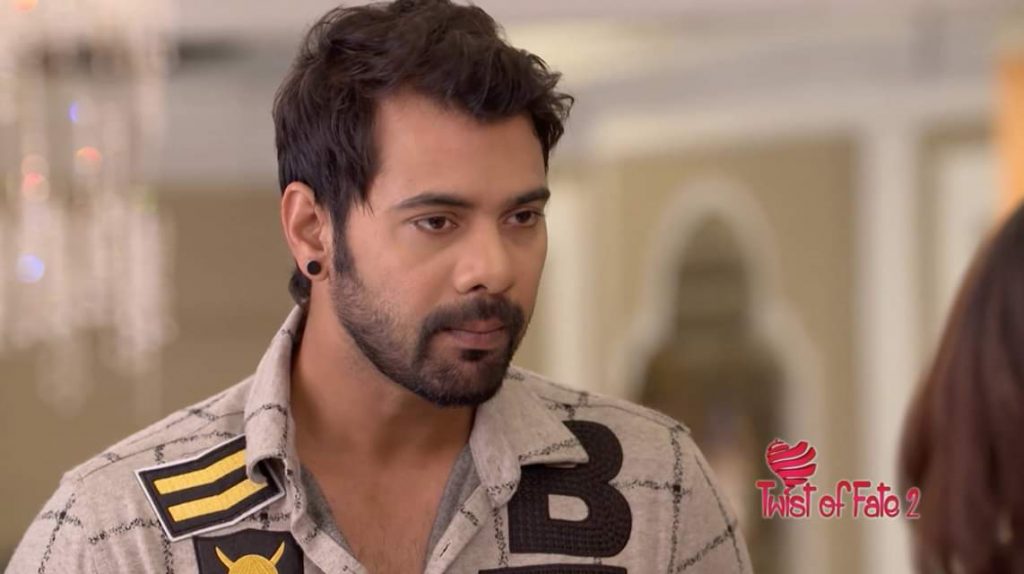 Abhi looking at Pragya’s pic and asks her to come back soon. Pragya comes to him and asks him to come fast. Abhi asks what’s the problem. Pragya tells him that Purab is in danger and tells him about Disha’s call. Abhi says I will go and look for Purab. Pragya says I will also come, if you don’t take me then I will go by myself. Abhi calls Anil and says can I take a plane to Haryana in 30 mins. They leave.

Disha comes to the Sangram’s bungalow’s godown/cellar and hears the goons talking and they go to have tea. She thinks this seems to be Sangram’s men and thinks where is Purab? She searches for him. She takes the stairs and gets inside. Purab is tied inside. She sees him tied and wounded. Kuch toh hai song plays…..She gets emotional and cries.

She blames herself and thinks Purab
was going to Mumbai but she stopped him. She thinks to go inside and save him. The goon teases Purab and don’t give him water. Sangram smiles. Disha feels apologetic and thinks she will save him. Sangram asks him to call Pandit to get him married to Disha, and asks him to bring same pandit who couldn’t solemnized their wedding before. Disha thinks she won’t let him succeed and thinks she will not leave him to marry anyone and asks God not to let her kill him. She thinks he has beaten Purab so much. She gets down from the window and some bamboos falls on goon. Goon thinks there may be rat or cat here as it is old house. Disha hides.

Simonika comes to Abhi’s room with drugged juice in her hand. She calls Pragya and thinks where is Abhi and Pragya? Where they have gone. Mitali comes there and pats on her. Simonika gets scared and tells that she brought Pragya’s medicine and juice. Mitali laughs and says you are doing Robin’s work, and says you will not get extra salary for this. Simonika says its ok and asks where is Pragya? Mitali takes the juice and says she will drink it. She drinks it and says it is good. Simonika asks where they went? Mitali says Purab and Disha called them and scolds her. Simonika thinks why now?

She thinks to kill Abhi once he is back. Disha thinks what to do, and goes inside and burns the place so that goons run out. Sangram Singh asks his men to set off the light and thinks whom to handle now, Purab or this fire. The goons go out leaving Purab inside. Disha thinks it seems everyone is here, and goes inside. Purab sees Disha and asks what you are doing here? Disha says I saw them taking you, and cries seeing his wounds. Purab aks why did you come here, they are very dangerous. Disha says for you. Kuch toh hai plays….Purab says this is Sangram plan to trap you and says you would have understood and asks her to leave.

Disha says I will not go alone and says I didn’t marry you for this day. She says I don’t care about my life, but can’t see you here. She says I couldn’t fulfill wife’s duty, but will take all your pains. Purab asks her to open the rope before they return. She opens the rope.

Purab says how we will go. Disha says she had set on the fire so that they all get busy. Sangram sees Purab and Disha in the broken mirror and gets angry. Sangram Singh catching Disha and Purab. He tells her that he thought to marry her, but she fooled him and married Purab. He talks cheaply and tells her that once Pandit comes, he will make us marry. Disha slaps him and says how can you think of marrying a married woman and that too infront of her husband.

Sangram says now you are married and have right to throw tantrums. Purab asks Sangram not to touch his wife. Sangram says he will touch her after marriage right infront of Purab’s eyes, and says I will become her groom, and asks what you will be. Abhi and Pragya come to Haryana. Abhi calls Taxi. Pragya says when you can arrange aircraft, then you can arrange cab also. Abhi says there is no network and says you will be illiterate always. Pragya says she was once a teacher. She sees temple and stops to pray. Abhi thinks if her prayer will bring cab for us. He sees goons coming in jeep and thinks where did he see them. He recalls and thinks they are Sangram’s goons. He runs to Pragya and says godsent goons.

They hear goon talking about taking Pandit to solemnized Sangram and Disha’s marriage. Abhi tells pragya that the goons were Sangram goons. Pragya asks how did he know?

Abhi tells that when they tied me and you have saved me. Pragya thinks he is talking about Munni. She says we shall sit in their car. Abhi says I know how to drive and will drive the car. He asks her to be silent. They argue. They see goons asking Pandit to come with them and take all the stuff needed in marriage. Abhi says he is feeling cold and tells that they shall push the car for some distance and then drive it. Pragya says how can I push the jeep. Abhi asks her to use her energy in pushing the jeep. They push the jeep and sit inside. Abhi asks her to tell the address. Pragya says she forgot. She recalls Disha telling her that goons might have taken Purab to Sangram’s old house. She tells Abhi.

They leave. Sangram beats Purab and asks Disha to agree for marriage. He takes a rod and tells Purab that he has to kill Purab to convince Disha. Disha shouts. Sangram asks her to agree else he will kill purab. He says I know you hates me and loves Purab and asks her to show love towards him. He says life will go away from Purab’s body. Sangram hurts Purab. Disha asks him not to harm him. Purab asks her not to bend down infront of him and says nothing will happen to me. Sangram says you are making me angry and hurts him. Disha agrees to marry Sangram.

Disha agreeing for marriage. Sangram asks his goons to get ready wearing turban and asks them to bring Disha. The goons come out of temple with Pandit, but see their jeep missing. They think what to do now, and decides to call Sangram. Abhi and Pragya are in jeep. They come to Sangram’s place. Abhi tells Pragya that Purab and Sangram are there. Pragya says so he is Sangram. Abhi asks didn’t you see before. Pragya says he has got thin. Abhi says they have beaten Purab badly and changed his looks. Some goons come infront of them and asks who are they? Abhi says he is jiju and came to protect her. After fighting, the goon holds Abhi, but Pragya hits a man with a heavy pot/vase. Disha gets ready for marriage.

Abhi praises Pragya. They go to Disha and hide the goons. Disha runs to Pragya and hugs her. She thanks them for coming. Abhi says he can protect Purab too. Sangram gets worried and thinks how marriage will happen without pandit. Goons bring Pandit there. Pandit says bad thing have happened with you. Sangram scolds him and tells that girl is shying as her husband is here. Pandit is shocked. Sangram says I have beaten him and asks Pandit if he wants to beaten up or get the marriage done. Pandit is silent. Sangram asks his goons to bring the bride.

The goons knock on door and ask other goons if they are inside. Disha says there are many goons. Pragya says how can we handle many goons. Abhi says we have to make a plan to handle them. The goons call Disha and asks if she is ready. Pragya asks Abhi to think something. The goons ask Disha if the goons come there. Disha says what to tell. Pragya asks Abhi to use his mind. Abhi and Pragya start their argument. The goons say that something is wrong. Abhi asks Disha to say that they had come there. Disha says she was in bathroom. Abhi as goon tell that he will bring her. They ask where is the other goon. Abhi says he is in bathroom. The goons standing outside asks them to come out within 2 mins, else Sangram will come.