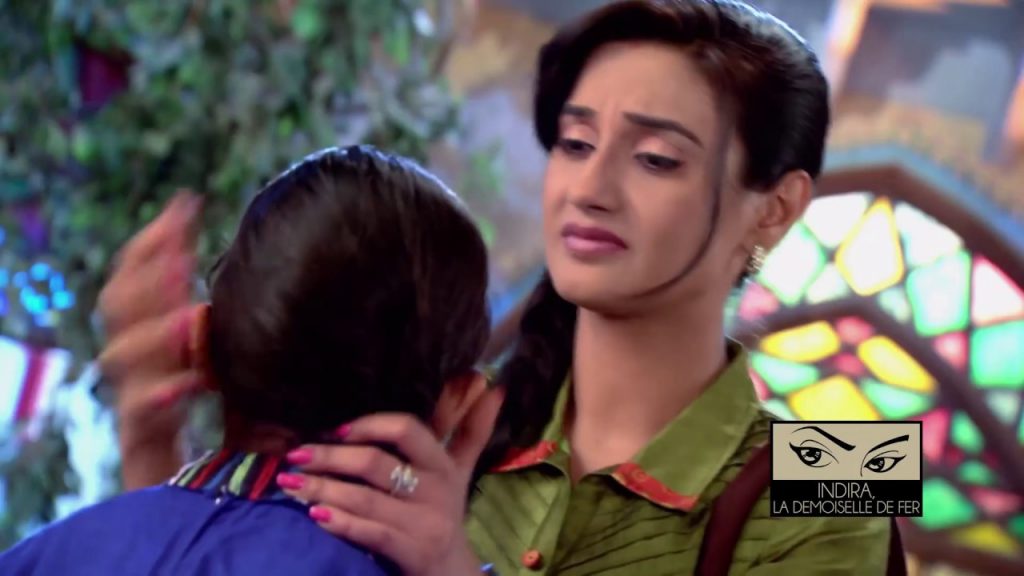 Indira tells Vanraj that she will leave Rk with his wife Zara if she fails. Indu comes and manages to boost Indira ‘s morale. Indira has a plan. Rk stretches as he complains that he is not paralysed but he feel like. He then hears foot steps and returns in his still mode.Zara enters the room with a bowl and she srarts to remove rks kurta .

She raises both hands but when RK ‘s hand remains firm without her support. This alarms her,RK realizes this and drops his hand. Zara is suspicious of RK Zara is removing RK ‘s kurta and he leaves his hand firm without Zara ‘s support and this makes Zara suspicious, she tries to look at his face but he is just the same. She puts her hands in the bowl and gets burnt because the water is hot, she gets an idea of sponging RK with hot water so that he can see his reaction.

She does it and RK moves his hand and Zara sees, she continues to sponge RK with the hot water in order for her to investigate if RK is faking the paralysis. She questions RK about this but her question is unanswered and this makes Zara furious and after helping him wear another kurta she loosens the brakes and cites that she is going for something, she pushes the wheelchair, Zara then says she will now know if RK is faking the paralysis.

Meanwhile RK tries his utmost best to loosen his belt so that he can jump from the chair but its tight and unfortunately the wheelchair rolls down the staircase. Zara is horrified and runs behind the wheelchair calling RK. The wheelchair reaches down and Indira in a very funny Avatar stops it and ridicules RK for being pushed from upstairs. Zara reaches there and asks Indira why was she touching her husband. Everyone assembles there .

She recieves a call from Ammo(Indu) who reprimands them for not calling she informs her that she has sent a lady who is related to Sugandha ‘s aunt. Zara says okay and disconnects. Zara asks her name and she gives a pretty funny name. She informs everyone about what Ammo said. Sugandha is puzzled! Munna asks her to calm down. Indu comes and veils Indira and scolds her for scaring young children.

Indu talks about Ammo inheritance and this makes Kutumb and Munna allow Indira in the house. The neurologist calls and informs Zara he will come to her place after an appointment.A fly settles on RK ‘s cheek which makes him.uncomfortable, Indira sees this and slaps RK, Zara wants to attack Indira but Indu tells her she was removing a fly from RK ‘s face. Zara asks kutumb to take indira to a room.

Munna asks Sugandha to prepare their guests tea. Indira, RK and Indu remains there, Indu hides behind a stool. Indira removes her disguise as RK stretches. RK tells Indira that’s my wife. Indira says she is his wife and that is Zara. she spreads some powder on rk and leaves from there. Zara comes and helps Rk to scratch him since he is itching all over, Zara starts to scratch herself cos the powder spread on her, Indu laughs.

Sugandha tells Munna she does not have an aunt. Munna goes to investigate. Indu tells a worried Indira that she will stop the doctor from coming here. Munna comes and announces that she is his sister, Indira. indira is overwhelmed and Munna wants to inform everyone but Indira begs him not to. They hug.

The doctor asks for sharma Niwas directions from a person and he is lead correctly, Indu tries to manipulate him but Zara shows up and scold her for misleading the doctor, Indu says she thought he said Verma Niwas. Rk dances on the number bathameez diil. Zara and the doc are heading to where RK is. Indira and Munna are shocked to see Zara.with the doctor. Episode ends with RK dancing.

Rishi sees Zara bringing a doctor to him and he goes back on his wheelchair. While doctor is doing the checkup, Munna enters. He says Rishi’s body under his neck is useless now. He doesn’t let the doctor continue with his check up and says I will prove to you that he has become paralyzed. He picks up a broom and hits Rishi on his leg. He keeps hitting harder and harder until doctor agrees that he has become paralyzed. He hit that hard that both Indira and Zara were having pain. Doctor gives medicine to Zara and leaves.

When Zara goes to drop doctor, Munna whispers to Rishi, don’t feel bad and don’t get angry. I brought a gift for you. It’s a whistle in a thread. He puts in Rishi’s neck and says you can use it in emergency to call someone. Zara sees and asks what he’s doing. Munna says I was just giving him whistle so he can call someone easily. When Munna is leaving, he changes medicine bottle.

As soon as he comes out, Indira gets angry at him asking why he beat Rishi like that. Munna says he didn’t recognize you so he deserves this. This is nothing, watch what happens next. Indira gets worried and asks what he did. Munna says, I exchanged his medicine and put loose motion powder.

Indira gets more angry, but Munna says, now he will keep whistling and Zara will have to keep taking him to the bathroom and she will get tired by that. More tired she gets, faster she will leave. Indira is impressed now and asks from where he got such smartness. Munna jokes and says, I started eating paneer with alcohol.

Zara gives medicine to Rishi and it starts showing its effect. Rishi can’t stand up and go himself as he remembers Indira threatening to beat him if he messes up. He whistles and Zara comes. She takes him to the bathroom. As soon as they come back, Rishi whistles again and she takes him again. This keeps happening.

Finally Rishi goes to sleep and so does Zara. But now Indu and Munna whistle from outside. Zara thinks Rishi did and she wakes up. Munna and Zara keep whistling and whistle’s sound is bothering Zara a lot.

Zara is feeding Rishi now and he throws food out which irritates Zara and she throws his food. She calms herself down and cleans Rishi’s face. She brings her food now. As soon as she takes one bite, Rishi whistles again. Zara gets angry and puts food, water, towel everything near Rishi and tells him not to whistle.

Zara leaves from there and goes to her room. Rishi remembers Indira’s words that if she is Indira, then she will love him no matter what, and if she is Zara, then she will go away in his bad time. It starts raining and Rishi is getting wet. He whistles, but Zara is too tired. She says, this is enough. I won’t be able to do this anymore.

Indira comes to Rishi and takes him to his room where she shows him Zara taking out fake tummy and going to sleep. Rishi is in disbelief. Zara puts cotton in her ear saying she won’t hear his whistle and she won’t have to wake up. Rishi turns back and doesn’t find Indira there.

He goes downstairs and apologizes to Indira. He says it was his fault. Both get emotional and hug each other. Rishi remembers how he pushed Indira out and made a mark on Indira’s forehead by hurting her. He says, I am world’s biggest fool. The way an owl can’t see in night, I also couldn’t see in day.

I couldn’t differentiate my ‘landlady’ and that fake Zara. It’s all my fault. You have been right since always. People say it right that male gender is like that only. If I didn’t see your face in that witch, then I would have never loved her. I really love you. Both hug again.

Rishi is going to kiss her, but she pushes him back. Rishi falls on wheelchair with Indira in his lap. He apologizes her and says, I won’t let that witch stay in this house for even a second more. Indira says, fine.. and this time pack her bags properly so she can’t come back.

It’s male gender.. it won’t take long to change. Rishi says, I will do whatever you say. It’s just matter of time before I throw her out. He tells her that he is changed now. Indira gives a big smile and says, you’re forgetting that I am still upset with you. I haven’t forgiven you. So keep getting wet in the rain.

Rishi apologizes again. Indira says, one more time. He says it again. He says, I know I will have to work very hard to make you happy which I will do. He tells Cheeku, see what your father will have to go through. Indira says, definitely and they both smile and are having a cute moment. Zara sees them from the upstairs and cannot believe it.

She asks how Rishi cannot see how much she loves him, how he can insult her love one more time, how he can betray her. She says, can’t you see I can’t live without you? Tears in her eyes as she sees Rishi hugging Indira.