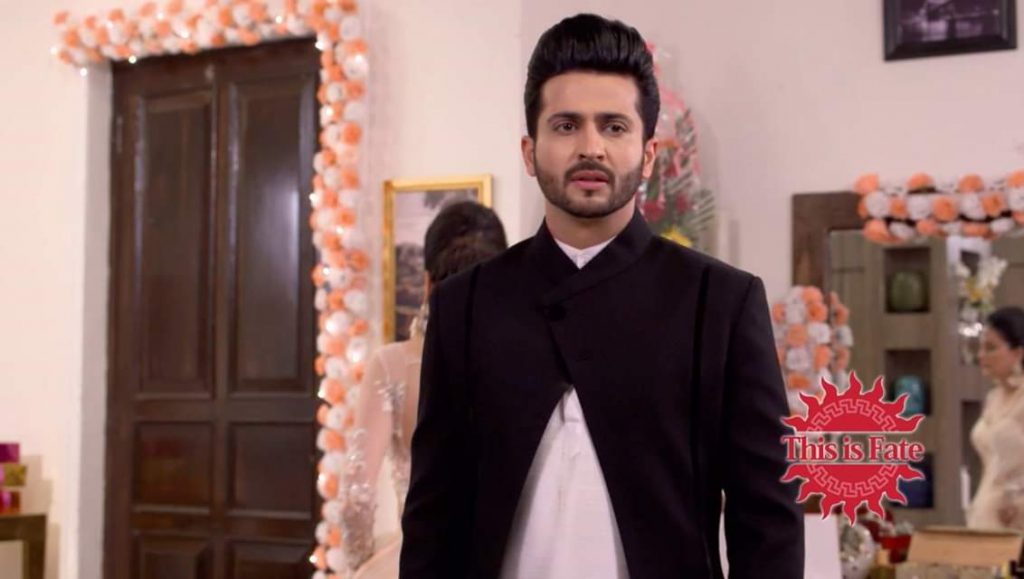 FRIDAY UPDATE ON THIS IS FATE

Preeta happily accepts to dance with Rishab. Sherlin comes to Karan while Shrishti tells Prithvi that he can’t go anywhere and dances with him. Preeta enjoys dancing with Rishab. Rishab politely asks her if he has ever told her she looks beautiful. Preeta laughs.

Rishab tells her that this was his problem as he cannot say a lot of things to her. Preeta asks what he meant by that? Rishab replies that its late now and he won’t be able to say anything either.

Karan dances with Sherlyn but watches Preeta. Sherlyn asks him if he is jealous of Preeta dancing with Rishab or the fact that she got engaged to Prithvi. Karan tells her to mind her own business. Prithvi asks Shrishti about her height.

Shrishti asks why that matters to him and also tells him that he should be concerned about the likes and dislike of Preeta. Shrishti notices him staring at Sherlin who also smirks. Shrishti shows her dislike and leaves the dance floor. Sameer asks Shrishti to dance but she leaves. As she passes by, Janki thinks about telling Shrishti about what she saw but she leaves watching Sameer behind her. Janki goes to find Sarla. She comes to Rakhi who points towards Sarla.

Janki brings Sarla aside. Sarla tells Janki that she isn’t concerned about Sherlin, while Prithvi is a nice man. Janki tells herself that Sarla wouldn’t trust her so easily and that she won’t even bother listening to her. She was worried and thinks about sharing the truth with Preeta. She goes to the dance floor but Sarla’s brother stops Janki half way and shows his burnt hand. He insists Janki to come and pour salt in the food as he cannot do anything with his burnt hands.

Shrishti hides herself behind a wall while Sameer looks for her. He lets go of her and leaves back to attend the function. Shrishti was relieved but turns to see Sameer right there. She slips while he holds her into his arms. Rakhi also sees them. Rakhi comes there and asks Shrishti if her hair is fine. Rakhi teases them for hiding their feelings while Srishti blushes and leaves while Rakhi teases Sameer. Rakhi was happy about the couple and goes to speak to Sameer about it.

Prithvi’s mother announces a couples dance for Prithvi and Preeta. Prithvi dances intimately with Preeta while she feels awkward by his touch. Karan was annoyed to see them dancing while Rishab seems upset. After the dance, Preeta leaves the stage. Rakhi also comes to Sameer who is busy on the phone. She asks Sameer if he was speaking to the love of his life. Sameer doesn’t understand what Rakhi meant.

Rakhi complains that he didn’t share such a huge matter with her. Sameer realizes that she is speaking about Shrishti, and denies speaking to her. Rakhi laughs that finally he has confessed. Rakhi tells Sameer in the love of every youth, people think they can hide from everyone but love can never be hidden. Sameer asks her not to be so filmy.

Rakhi asks Sameer if he hates Shrishti. He replies that he doesn’t hate her as she is a nice girl. Rakhi tells herself that their birth charts would also match perfectly well. She later decides to set them up and teases him a little more. Preeta was uncomfortable as she walks down the corridor. Karan comes there. Preeta asks why he looks upset.

Karan tells her that Prithvi is a shameless man as he was touching her during the dance. Preeta tells Karan that Prithvi has every right to touch her, as she is her husband to be. Meanwhile, Janki watches Karan and Preeta and hurries to approach them. Kareena hits her half way and feels disgusted about her. She sends Janki to bring juice for her, but Janki calls a waiter.

Kareena insists that Janki should serve her and she also complains about their arrangements. Karan further tells Preeta that he is really irritated today even though he still cares for her a lot. Preeta doesn’t understand what he was trying to say. Karan explains that Preeta was his grandmother’s physio therapist and he doesn’t want her to come to any harm. Janki tells Kareena that the food will be served in five minutes.

Kareena complains that it is too late, Janki argues that it’s not. She leaves Kareena as she has a lot to do and also doesn’t have time for her. Karan and Preeta argue with each other. Karan complains that Preeta didn’t listen to him against all the doubt he had on Prithvi.

Preeta tells him that he gives rubbish suggestions which is not worthy for one to listen. Karan turns to leave but Preeta holds his hand. Karan orders her to leave his hands or else. Preeta asks him else what will he do? Karan replies that he would take her away in front of everyone.

Janki comes to speak to Preeta but due to a fight with Karan, Preeta is in no mood to listen to her. Preeta asks Janki how was it her fault if Rishabh asked her for a dance. Janki takes Karan’s side, which annoys Preeta and she leaves. Kareena watches Sarla happily speaking to some guests. She intentionally taunts Sarla. Kareena tells Sarla how Janki insulted her and Sarla apologises on her behalf.

Janki stops Preeta and apologizes to her. She also informs her that she has seen Sherlin with a guy, Preeta doesn’t believe who that person is. Sarla comes there to scold Janki for misbehaving with Kareena. Sarla cries that Kareena insulted her in return. Sarla doesn’t listen to Janki and instead send her to the kitchen to check the food.

After Sarla has left, Preeta thinks if Janki has seen Sherlin with someone then it means her boyfriend is right there at the function. Preeta spots Sherlin busy on her phone and congratulates her in a taunting way. Preeta asks Sherlin what she wants. Sherlin rudely asks what does it mean to Preeta if she still wants to marry Rishab. Preeta feels disgusted about her thinking and says that she isn’t like Sherlin as she is having an affair after her engagement. She also reveals to Sherlin that Janki has seen her with the man and that once she knows about the persons name, she will disclose her reality right in front of the family.

Prithvi calms her down by hugging Sherlin. Sherlin straightens up as Janki stood right behind them. Janki tells them that she hasn’t seen someone as downtrodden as they are as they can’t even stay away from each other even on the day of an auspicious function. She asks them that if they are dying for each other, then why do they choose to ruin the lives of Preeta and Rishab. Sherlin explains to Janki that they were only congratulating each other.

Janki tells Sherlin that if she thinks she is crazy not to understand what she is up to. She tells Sherlin that If it was a congratulating hug, they should have done it in front of everyone. Janki tells them that now their tricks won’t work as they don’t deserve to be married in a respectable family. She shouts at them that they won’t marry Preeta and Rishab respectively and she will announce the their reality in front of everyone as to what they are up to.

As Janki turns around to inform everyone about their evil deeds, Prithvi hits her head with a huge vase. Janki fell on the floor. Prithvi tells Janki that he can’t bear if anyone interferes in his personal life. He also says that the stupid Rishab ignores Sherlin for Preeta, and now when he handled Preeta, Janki came to interfere in the matter. Prithvi tells Janki that he has always got what he wanted. Janki tells Prithvi that he isn’t human but a devil. Prithvi thanks her for the complement. Janki grabs his collar but Sherlin gives her another bang at the back of her head.

Sarla is shocked when Rakhi says that it was her ( Sarla) who brought the proposal of Sameer and Srishti to her. She also tells Sarla that she has even talked to Shristi about it and she seems to show interest. Rakhi suggests about not delaying and finalizing the situation tonight. Sherlin was afraid after hitting Janki. Prithvi says its Janki’s punishment and that it was her own mistake. Both Sherlin and Prithvi were now worried to hide her somewhere.

Prithvi tells Sherlin that its his room and that if his parents come there, there would be a problem. They decide to save themselves before getting caught. Prithvi and Sherlin carries the body of Janki on their arms, when they hear a lady speaking on phone. They hide the body under a table.

The lady asks Prithvi if he is looking for the way out and instructs him. Her phone fell down and Sherlin quickly picks it up for her. She lies to the lady that Sarla was looking for her. The lady hurries, whiles they take Janki’s body outside.