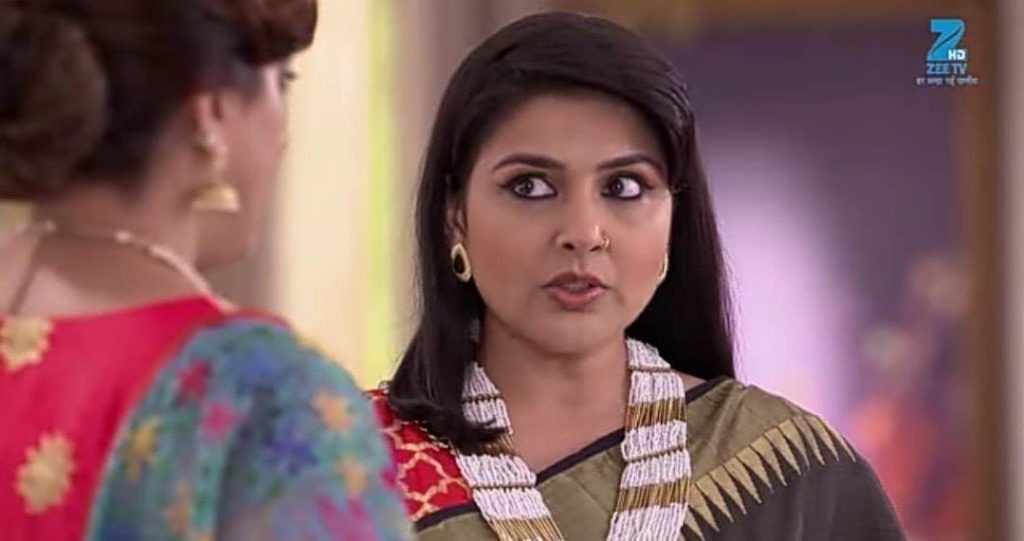 Shishtri is lost in thoughts of Karan by saying that he is really handsome. Preeta tells her sister that she won’t marry any of the Luthra brothers. Rishab comes downstairs thinking if Preeta was discussing about him with her sister, he thinks that this means she is ready to marry.

He wonders whom Preeta must have share the news with. Kritika comes to Karan’s room and thinks about speaking to him about Preeta. She tells Karan that Preeta is a very nice girl. Karan thinks she must be talking about the theft incident and says that they helped with the party a lot. Kritika complains that Karan didn’t share about his and Preeta’s affair. 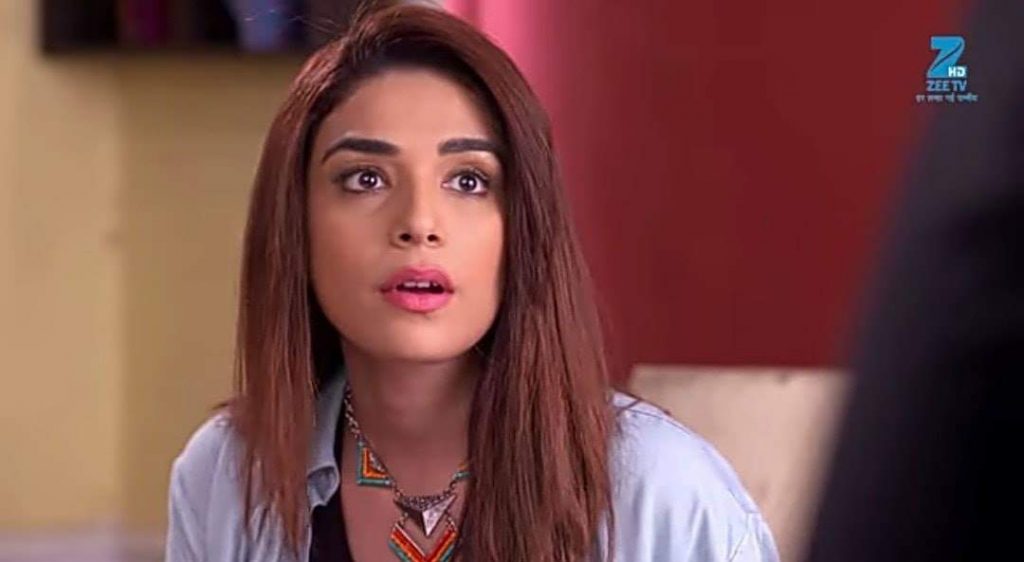 She cheerfully says he has chosen the right girl for him to marry. She adds that it must be a treat for her best friend along with sister-in-law. Kritika is even ready to help Karan with a court marriage with Preeta. Karan gets alert, he asks who else knows about it. Kritika tells him everyone knows about it. Rishab comes to speak to Karan but stops in front of Kritika. Karan leaves the room.

Preeta is taking care of the decorations of the house and thinks that Srishti can do any work easily and that she is really hard working. Kareena, who is passing from there sees her and asks her why she is looking at her house as if it was hers. Kareena tells Preeta that Rishabh has said yes to marrying Sherlyn and now she (Preeta) is all heartbroken and is therefore behaving weird.

Preeta reveals to her that she isn’t upset about Rishabh getting married to Sherlyn as she herself asked him to marry her and had made him agree to get married. Kareena asks her to come and dance at Rishabh’s wedding in front of everyone. Preeta feels bad when Kareena leaves from there. Meanwhile, Kritika goes to Karan’s room and asks him about his affair with Preeta.

He tries to explain it to her that he doesn’t like her and that he will never date her in his entire life. Kritika isn’t ready to believe him and leaves as soon as Rishabh comes to the room. An excited Rishabh didn’t know whom to share his happiness with, therefore goes to his brother.

Karan comes downstairs and stops Preeta. He asks her what rumor she is spreading about them being a couple. Preeta tells him that already she has lose her character and developed bad image in front of the Luthra family and now Karan thinks she would ruin her name by connecting her name with him. Karan tells her that he would connect with waiters but never associates himself with Preeta.

He tells her that he knows she is crazy about him. Preeta says neither was she crazy nor is boring, she tells Karan that if he says another word she would actually go and tell everyone they have an affair. Shrishti comes looking around for some work, Preeta goes with Shrishti leaving Karan speechless.

On the way back, Preeta explains to her sister that she shouldn’t come to the Luthra house in such an expensive dress. Shrishti explains she changed because the dress was Vandy’s. She hires an auto as Vandy had given her some money. In the auto, both await to meet their mother as everything was well between them. Shrishti feels bad about her behavior with Sarla. Preeta watches her crying, Shrishti explains the tears were due to air.

She confesses she wants to give Sarla a tight hug, and wonders what that feeling is. Preeta says she was also thinking about Sarla as she is so worried whenever they are in pain. She says that Sarla loves them dearly. Shrishti tells her sister that she must fill the space created in so many years.

In the room, Karan is worried about his and Preeta’s rumor. He finds her keychain in his room and decides not to think about her. He calls another girl and asks her to meet him. He lay down again and thinks about jerking her thoughts away, he wish Rishab dismiss Preeta from her job.

Preeta and Srishti returns home. As soon as Beeji opens the door for them, they see her worried. When they ask about what has been bothering her, she turns back to look at Sarla who is fuming with anger. Sarla throws a fit at the girls for having called Tanu for help as her marriage hall is in debt. She starts shouting at them, saying that Tanu is the one who tried to kill Pragya and tried snatching Abhi from her.

She tells them that now Tanu is going to take advantage of this and will bother Pragya even more. Srishti stops her and says that she was going to address her as their mother, but she (Sarla) is a stone hearted person and will never change, Srishti furiously tells Sarla that it is just Pragya she cares about and has feelings for and no one else.

The two sisters then leave from there. An upset Beeji turns towards Sarla and asks if she is happy with what was happening between herself and her daughters. Srishti tells Preeta that Sarla does not care for them at all and she is just concerned with Pragya. The two drink water and go off to sleep.

At the Luthra mansion, Rishab is smiling as he thought about Preeta’s proposal. He thinks about calling Preeta then stops himself, he feels excited and calms himself by drinking water. He decides to dial once but still prevents himself. He finally lay down to sleep and tells himself to hold his emotions as he isn’t a teenager. He tells himself that he trusts Preeta a lot and he must ask her tomorrow if he likes her or not. Sarla comes to the girl’s room and finds them sleeping, she shuts the curtains.

Preeta places her hand over Sarla’s as she corrects her blanket. Sarla sits there for a while. Preeta wakes up when she had left and wakes Shrishti up. Sarla hears Preeta telling Shrishti that she dreamt of their mother who even loved her but Shrishti was not interested listening to Preeta. Karan returns from practice in the morning and complains to Rakhi that Rishabh pushed her to go out in the morning. She tells him about Rishabh getting married, when Karan says that he cannot marry Preeta. Kritika hears their conversation and thinks that Karan really likes Preeta.

Rakhi reveals that Rishabh has said yes to Sherlyn and now they would get married. Karan is finally relieved and hugs his mother. Rashi gets a call from Sherlin’s mother.

Shrishti is watching the album photos. Preeta tells her to hurry as she will be late for work. Shrishti tells her sister that she firstly has to go to their house and then for the decoration shopping. Shrishti reminds her she had arranged for Preeta’s engagement back then. Preeta gets sad. Shrishti asks why Preeta gets sad at the name of Deepak.

Preeta says Deepak was their father’s last wish for her and she couldn’t fulfil even that. Shrishti says Deepak was greedy for money and he never realized what he lost. On the other hand, Rishab is excited to see Preeta as he selects a dress. Preeta is also sitting in her room looking at her pictures with Deepak and her father. She thinks as to why Deepak had to be bad as he was her father’s last wish. She starts to leave for the Luthra house with Srishti when they see some bankers threatening Sarla of taking her marriage hall.

She begs them not to do that to her. Preeta feels bad for Sarla and wish to help her. Shrishti is happy that Sarla is in tension as she also tensed them last night. At the Luthra house, Rakhi discuss with Kareena that Sherlin’s mother called her. She says that Sherlin is a bit confused taking Rishab and wants to go for a date with him. Kareena says that Rishab would never agree if he knows he is going to be judged for marriage.

Rashi assures her that she would handle it as she has got a solution for this. Rishab comes from bathroom. Karan is there in his room and congratulates Rishab for getting such a high profile girl. Rishab thinks about Preeta and says he respects her a lot. When Karan leaves his room, Rishab wonders why Karan sounded as if he was speaking about someone else.

Meanwhile, Rashi asks Preeta to convince Rishab for him to accept the date with Sherlin. She finds Kareena scolding a servant and sends Preeta to give juice to Rishab. Preeta tells Dadi to finish her breakfast as she will be back to her. Kareena warns that Rashi would bear the consequences of such closeness between Preeta and Rishabh. Rashi ignores her and takes medicine to Dadi. Kareena dislikes her confidence.

Preeta is worried how she would speak to Rishab about the date as it is a personal issue. Karan comes from the front and hits her and the juice fell off. They have an argument about Preeta always mingling with him. Preeta runs towards the room and hits Rishab. She notices Rishab selecting from a whole pile of clothes. She selects a formal dress for him. Rishab thinks how Rashi came to convince him for marriage and said his wife would always help him select his dress. Preeta thanks Rishab for agreeing to marry. Rishab asks if she is as happy about the proposal as he is, Preeta replies without any doubt she is.

She asks Rishab out for a date, Rishab says he heard Rashi calling to her. He tells her to share the timing and he will look after the arrangements. Kritika comes to discuss with Preeta with some arrangements with the wedding. Rishab comes to the door and signals for Preeta’s consent about the dress, she gives a thumbs up. Rishab passes on and Karan comes in his place when Kritika looks there. She thinks it must be Karan Preeta was signaling at.

Meanwhile, Deepak’s father asks him what he was thinking and questions why he had broken the engagement earlier. Deepak says he was mad at that time, but it was a mistake. He adds that Preeta was pretty and educated and everyone fancied to marry her. Deepak vows that he will make her apologize to them for all her misbehavior about their demand for dowry. Deepak tells his mother that he has applied for a job in Mumbai and he will go there and blackmail Preeta and convince her to marry him.

Srishti goes to Kareena’s room to show her some designs and samples for the wedding when Kareena insults her by saying that her choice is of the middle class. She tells her to go and get new samples. Sameer is leaving home and also speaking on phone. Rishab’s father stops him and tells him to take rest as its not his age to take such business stress. Preeta hears this. When Sameer has left out of Rishab’s fear, Preeta says that he is like her father, he also used to say the same.

He asks Preeta to call her father always. Preeta breaks into tears as her father is no more. Mr. Luthra tells her not to cry and also tells her that parent’s never leaves their children’s side. Rashi tells Preeta to leave with the driver as she has already booked a table for Sherlyn and Rishab.