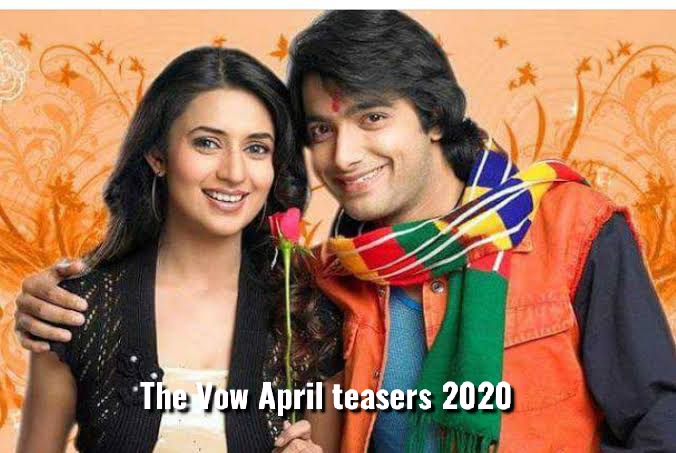 The Vow April teasers 2020: Surili takes advantage of Vydia’s innocence to work towards taking her place in the house. Will she be a threat to Sagar and Vydia’s marriage?

Vydia comes to know that the medication Sindoora gives Sagar is not the prescribed medicine. Even with everyone’s warning, Chandra is blinded from seeing Heera’s evil intentions.

Hema is at it again, she is now thinking about tricking Chetan into liking Shalu. Will her plan of being part of the family succeed?

Vydia’s happiness is compromised when Kartik makes a move on her.  Sindoora plans an attack on Sagar, will her plans succeed?  Hema manages to trick Chetan into marrying Shalu.

Vydia’s instinct tell her that Sagar’s life is in danger. She reaches him just in time but will he survive?

While trying to help Sagar, Vydia is accused of murder. Sindoora then advices her to take an unworthy action to get released. How will they manage to prove her innocence?

Fate seems to not be favouring Vydia. All odds are pointing that she is guilty. Heera proves to be many steps ahead of Sindoora.  What will he do with this power?

Heera uses the evidence that proves Sindoora’s guilt to blackmail her into giving him a share in their business. Bharat finds the tape that proves Vydia’s innocence.

Sindoora is threatened by Heera. The evidence he has against her forces her to make a drastic decision to erase the problem. Chetan and Shalu’s wedding preparations are underway.

The newlywed couple, Shalu and Chetan, Sagar and Vydia, go off to honeymoon. Vydia meets Surili at their hotel.

Surili is trying to bring division between Sagar and Vydia.  Kartik overhears Heera and Hema’s conversation. Now their plan is not a secret anymore.

Shalu’s mouth slips and she mistakenly reveals that she is, in fact, not pregnant. After finding out, Sindoora puts the blame on Vydia for Shalu and her mother’s deceit.

Chetan stops Shalu from leaving the house. Surili enters the Sigh house and gives them news that leaves the family shocked.

Surili deceives Sagar’s family by paying the doctor to not reveal the truth. Sindoora finds out about this, her reaction is unexpected.

Surili takes advantage of Vydia’s innocence to work towards taking her place in the house. Will she be a threat to Sagar and Vydia’s marriage?

Surili convinces the family that it is best if Vydia raises Sameer as her own. Uma falls for Surili’s tricks and thinks that she has changed.

Surili’s plan to make Sagar feel isolated seems to be working.  Sagar takes a drastic step concerning Sameer in order to take back his place in Vydia’s heart.

It is evident that Surili’s plan to create conflict between Vydia and Sagar is not going as planned. On the contrary, Vydia manages to bring Sameer and Surili together.

Surili and Sindoora’s plans to create doubt in Uma’s heart has suceeded. Vydia and Sagar are finding it difficult to raise Sameer.

Sagar’s mental state gets in the way of Sameer’s education and growth.  Surili hopes that Sagar will make her priority but will he be able to forget his love for Sagar?

Once more, Vydia is being blamed for a crime she has not commited. Surili puts Sameer’s life for her own selfish reasons.

Tushar is convinced that Surili is the one to blame for Sameer’s accident. Will he be able to uncover the hidden truth?