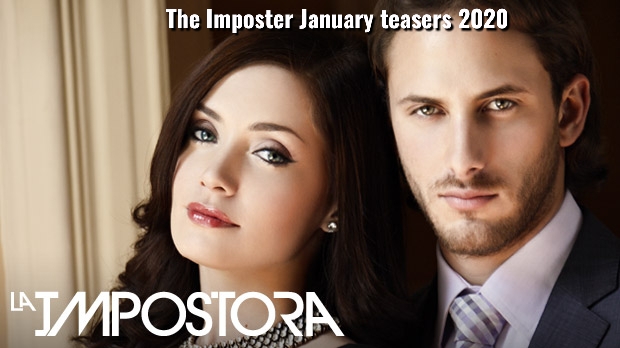 The imposter January teasers 2020: Adriano left Acapulco 20 years ago. Now he’s back and his main purpose is to settle pending scores for the death of his true love, Valentina.

Monday 20 January 2020
Adriano left Acapulco 20 years ago. Now he’s back and his main purpose is to settle pending scores for the death of his true love, Valentina.

Tuesday 21 January 2020
Mariana explains to Eduardo that she returned to the city to be with him and to get to know her daughter – but he doesn’t believe her.

Wednesday 22 January 2020
Blanca makes Raquel and Leonidas believe that Valeria is her assistant. Eduardo visits Mariana and confronts her about what she told Sofia.

Thursday 23 January 2020
Blanca meets Eduardo and they quarrel about the gift he gave Sofia. Jorge reveals to Karina that he is in love with her.

Friday 24 January 2020
Eduardo talks with Karina and tells her that Simona told him Blanca is a prostitute. Blanca confronts Adriano over Ramon’s job.

Wednesday 29 January 2020
Raquel reveals that Leticia is Melania’s daughter and she will live with them. Blanca wants to know who Sofia’s mother is.

Thursday 30 January 2020
Eduardo discovers that Victoria never sleeps in her hotel room. Adriano crashes his car against Mariana’s car so he can meet her.

Next: February teasers The imposter