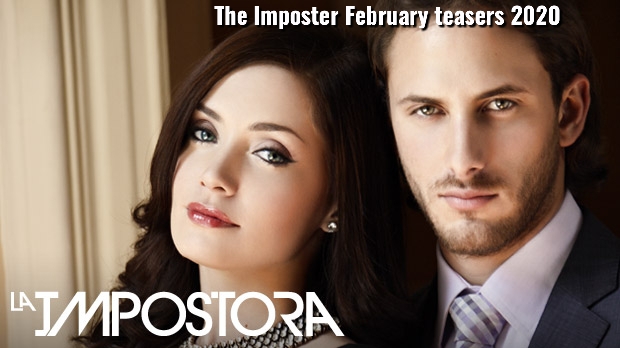 The imposter February teasers 2020: Karina learns that Bianca is alive. Raquel alters the DNA test results. Adriano tells Blanca she is his daughter.

Monday 3 February 2020
Adriano finds out that Blanca is his daughter. Mariana blackmails Raquel. Eduardo discovers a secret contained in the safe at the mansion.

Tuesday 4 February 2020
Adriano warns Blanca to disappear. Adriano finally reveals to Blanca that she is his daughter. Mariana  asks Rafael to kidnap Sofia.

Wednesday 5 February 2020
Raquel reveals to Eduardo that Blanca is Valentina’s daughter and Memo was the person who adopted her. Rafael takes Sofia without Bianca knowing.

Thursday 6 February 2020
Bianca loses Sofia at an amusement park. Eduardo helps Bianca get into the Altamira mansion. Mariana  shows her dark side over Ricchi’s ‘job’.

Friday 7 February 2020
Jorge informs Raquel that Blanca is still alive. Eduardo and Blanca are closer than ever. Mariana plans to fight for custody of Sofia.

Wednesday 12 February 2020
Tuerto makes a recording listing his ‘jobs’. Mariana tells Sofia that she is her mother.

Thursday 13 February 2020
Mariana insists that Eduardo has been lying to Sofia. Raquel finds Jorge with Karina and he explains that he is happy. A fire breaks out.

Friday 14 February 2020
Memo Guerrero wakes up from a coma. Everyone believes that Leticia caused the fire. Memo reveals the truth about Blanca and his son to Adriano.

Tuesday 18 February 2020
Sofia has escaped and is lost but Adriano  later finds her. Eduardo spends the night with Blanca. Sofia’s new DNA test results are revealed.

Wednesday 19 February 2020
Cristobal informs Mariana that Eduardo and Blanca spent the night together. Socorro confesses to Adriano. Raquel is in serious danger from Memo.

Thursday 20 February 2020
Ricchi threatens to kill Mariana but she asks for one more month to give him the Shipping Company. Jorge has an encounter with Blanca.

Friday 21 February 2020
Raquel gives Rafael the keys to her apartment. Memo cannot reveal to Adriano who is his son. Blanca and Cristobal find out that Memo has died.

Tuesday 25 February 2020
Socorro knows that Adriano was involved  in Memo’s death. Diego finds out that Rafael is living in Raquel’s apartment. Blanca wants to marry Eduardo.

Thursday 27 February 2020
Fernanda visits Blanca and tells her that Adriano is responsible for Memo’s death, but Blanca does not believe her. Arnaldo attacks Father Camilo.

Friday 28 February 2020
Adriano, Blanca and Luciana plot to make Raquel Altamira fall into her own trap. They want Eduardo to realise that his mother is a bad person.