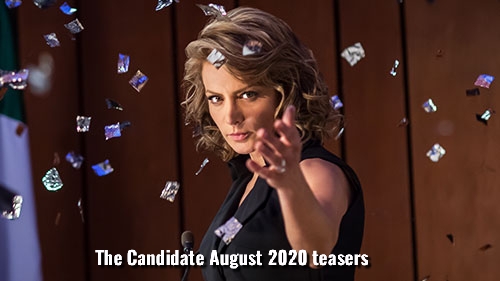 When Alonso decides to run for the presidential candidacy, he shows his true face: ferocious, violent and perverse. He is capable of destroying any political adversary without measuring the consequences, without realizing that he is transforming his best ally, the companion that took him to the most important place of his career, is his main adversary.

Florencia Azcurra is brutally murdered while at the senate. Regina is shocked when Alonso tells her that he knows that she sent someone to kill Florencia.

Regina tells Alonso that she is tired of his mistreatment of her. Mario tells Cecilia that to protect her, Florencia had to die.

Teresa tells her daughter that she has decided to check herself into rehab. Regina is surprised to see her father and Cecilia hugging each other.

Ignacio tells Gerardo that the members of his party want him to resign. Hugo asks Emiliano to forgive him. Omar orders his men to kidnap Mario.

Almiron tells Regina that someone kidnapped her father. Morales tells Gerardo that the party’s wishes are to get the presidency.

Almiron tells Regina that her father’s life is in danger. Natalia tells Alonso that his father is a mafia man.

Regina is upset to see Cecilia in Alonso’s office and accuses her of being her father’s lover. Omar tells Natalia that her lover escaped.

Alonso asks Regina if it is true that the workers syndicate proposed her to be their candidate for the presidency. Gerardo tells Regina that he is still in love with her.

Cecilia shows Regina some photos where she is kissing Gerardo. Javier is killed.

A furious Teresa accuses Regina of stealing her husband. Teresa goes with Ximena to pick up her things at her father`s house.

Alonso and Cecilia are about to get caught in a compromising position. Hugo attempts suicide.

Susana goes to see Regina to ask her for help. Hugo recovers. Omar asks Natalia to be his woman again.

Mario kills Susana. Ximena tells her mother that she is ruining her life. Regina decides to focus on her political career.

Mario suffers a heart attack because of drugs and alcohol abuse. Emiliano and Nayeli are caught in a compromising position.

Ximena confronts Emiliano for having sex with Nayeli. Regina is upset that Alonso is using her son to launch his campaign.