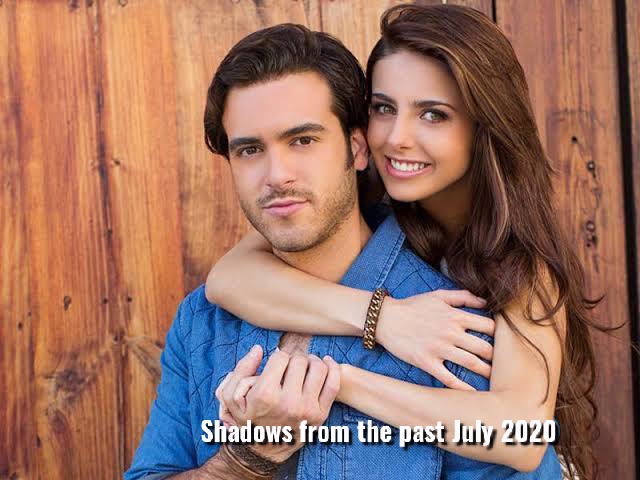 Two very different families live in the village of Santa Lucía who are involved in a whirlwind of passion, pain, and revenge. The rivaling families are the Mendozas and the Alcocers.

Severiano Mendoza and Candela Santana are a rich and powerful marriage who live at the ranch, “Las Ánimas”, along with their young son, Cristóbal. Roberta and Raymundo Alcocer also have a daughter named Alonza; however, they do not live with the same luxuries as the Mendoza family, which causes frustration and resentment in Roberta as nothing is enough to fill the inferiority complex that follows her like a shadow

Shadows from the past July teasers 2020:

Candela warns her son that Aldonza will find a way to make him hate her and his father.

Severiano threatens Jeronimo at the clinic. Aldonza assures Adelina she’ll marry Cristobal with or without her support.

Renato tells Aldonza about several fingerprints found in her apartment adding that they very possibly are Abelardo’s.

Severiano informs Abelardo he might be arrested and orders him to hide. Silvia tells Cristobal where Aldonza is.

Lola and Veleria have a fight. Cristobal stalks Aldonza at Renato’s house and she refuses to speak to him.

Cristobal accidentally crashes his van. Aldonza finds him unconscious and takes him to the hospital. They get married.

Abelardo asks Severiano for more money for his expenses while he is in hiding. Aldonza and Cristobal are celebrating their marriage with champagne when Severiano and Simoneta crash the party.

Prudencia tells Emanuel he’s Humberto’s son. Aldonza confesses to her husband that a man raped her and he’s determined to find out who that man is.

Humberto makes it clear to Valeria that Emanuel is not his son. Adriano informs Uriel that Abelardo owes him a substantial amount of money for bets he made in poker.

Jeronimo and Adelina find out Aldonza and Cristobal got married and The father proposes the kids’ religious wedding to be in a week. Abelardo enters to Severiano’s office and takes a gun.

Cristobal finds Aberlado and tries to help him but Abelardo dies in his arms. The police don’t take long to reach the conclusion that the gun found at the scene belongs to Severiano.

Anonymously, Valeria calls the attorney general’s office and reports Cristobal for having a reason to kill Abelardo. Candela tries to locate her husband and Simoneta is the one who answers in his hotel room.

Cristobal is arrested for Abelardo’s assassination. Candela makes the mistake of telling Jeronimo that she will forgive Severiano for having had a baby boy with Roberta.

Aldonza visits Cristobal in his cell. Candela assures her son that Valeria is the only woman who can make him happy. Lola confronts Simoneta.

Valeria confesses to Prudencia that she is pregnant. Aldonza is happy because Joaquin decided to work with them on the orchard.

Candela informs Cristobal and Aldonza they can’t remain married because they might be siblings. Renato confronts Severiano and he threatens him.

Aldonza asks Renato to annul her marriage. Father Jeronimo calls on Humberto to ask him downright if Emanuel is the son of Severiano and Roberta.

Father Jeronimo confronts Candela for her lies. Cristobal gets drunk thinking that Aldonza could be his sister.

Candela tries to convince Cristobal to marry Valeria when his divorce is final. Joaquin spends the night in a cell.

Aldonza breaks up with Cristobal for good. Severiano admits Roberta had a daughter, but she was stillborn.

Renato calls on Cristobal’s house to deliver to him the documents to start his divorce from Aldonza. Severiano takes Camilo by surprise and gives him a blow to the head.

Uriel accuses Severiano of being guilty of his son’s death and tries to suffocate him.