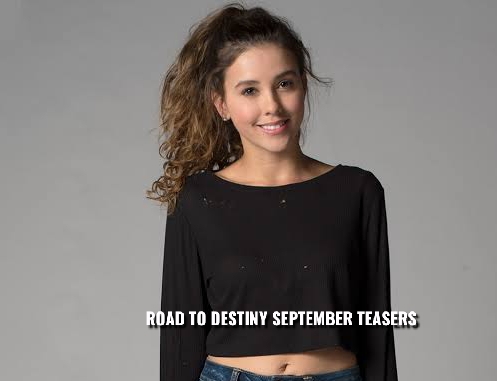 Road to Destiny September teasers: Luis is sentenced to ten years in prison and later discharged from all crimes. Fernanda follows Diego where he is holding Lucero.

Marissa wants to know what secret Pedro is keeping about Luis. Marissa apologises to Carlos for all the times she never listened to him. The bank’s crisis is out of control.

Camila is sorry for what she has done with her life. Carlos is not sure of winning the trial. Ordoñez defends Leopoldo.

Ordóñez searches Isabela’s apartment looking for the documents supposedly stolen from the bank by Luis. Carlos and Fernanda decide to get married.

Luis asks Solorzano to teach Leopoldo a lesson. Pilar files a missing report for Lucero. Leopoldo is stabbed in jail.

Fernanda warns Luis not to meddle with Pedro again and to move away from them. Diego and Olivia get married. Mother Rosaura is afraid to lose her job.

The judge declares Luis innocent. Lucero tells Diego that she doesn’t love him anymore. Luis tries to talk to Fernanda but she rejects him.

Luis is found not guilty, which enrages Carlos. Amelia goes to ask for Lupe’s forgiveness and they reconcile. Carlos swears to avenge Rosario’s death.

Diego realizes Lucero escaped and goes looking for her. Mariana tells Hernan that she is not barren. Marissa tells Carlos they should put up their personal savings to save the bank.

Hernan gets angry to find out that Mariana refused to have a son with him. Camila begs for money. Luis decides to go back to the office to make sure that Carlos is eliminated.

Leopoldo welcomes Luis in jail and threatens him in a veiled way. Fernanda tells Carlos that she feels pity for Luis.

Paquito is worried about Marissa and fears she might die. Diego forbids Olivia to have any communication with her family and locks her up in the apartment.

Carlos is still at Marissa’s house taking care of her. Luis is sentenced to ten years in prison. Fernanda follows Diego where he is holding Lucero.

Diego flees when he realises that Fernanda has caught him. Mariana finds out that Fernanda is getting her father’s fortune and goes berserk.

Amelia and Pedro tell Fernanda that they are getting married. Fernanda finds Camila and convinces her to go back home.

Camila apologizes to everybody for the harm she did to them. Mariana insists with Hernan that she also found Camila.

Pedro and Amelia celebrate their wedding. Luis is sick and delirious. Isabela introduces Teo to the models.

Lupe reminds Pedro that Amelia was a very bitter woman. Luis has a very severe infection. Fernanda arrives late for her music class and is suspended.

A fire in the prison’s kitchen creates havoc. Luis takes advantage of the situation to try to escape. The prison guards believe Apolinar is the inmate who escaped.

Fernanda goes to prison to claim Luis Montero’s body and she ends up having to confess Luis was her father. Blanca tells Mariana that her biggest fear, being all alone, has come true.

The music teacher tells Fernanda she has to let her emotions flow with the music. Carolina tries to get Isabela to see that her prejudice against poor people has led her to lose the man she has loved.

Blanca believes that Mariana kidnapped Pedrito. Isabela apologises to Teo and he decides to give her another chance. Marissa faints due to the shock.

Diego is arrested. The police liberate several victims of Diego’s. Isabela finds out that Carlos and Fernanda are getting married that day.