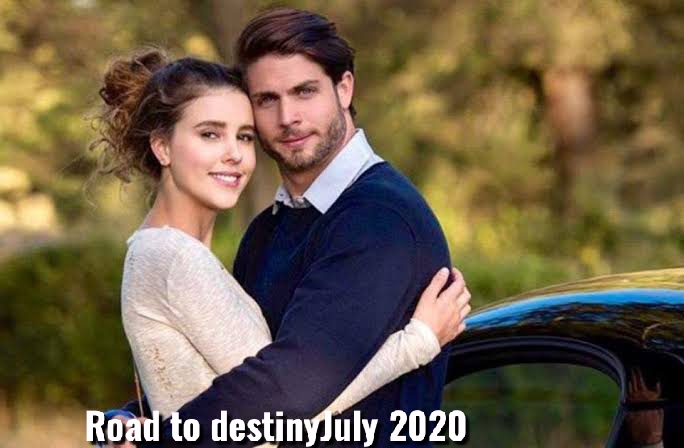 Luisa Fernanda Pérez, a beautiful, 18-year-old student, has two passions: mastering the violin and gardening, a skill she learned from her father, Pedro, the former groundskeeper of the wealthy Altamirano family’s estate. A chance encounter with destiny alters her life after she is injured in a car accident caused by Luis (her biological father), a playboy lawyer and falls for his stepson, Carlos, an attractive, young doctor treating her at the local hospital.

Road to destiny July teasers 2020: Carlos learns that Marissa suffers from muscular dystrophy. Fernanda finds out that Lucero and Diego are going to get married secretly.

Fernanda tells Pedro that Carlos is the love of her life and that it won’t be easy to get over him. Luis taunts Mariana by telling her that the new will doesn’t guarantee her anything.

Javier promises Fernanda that he won’t squabble with Carlos anymore. Mariana tells Amelia she still loves Luis and that they’re not together because Amelia got in the way.

Fernandoa says that she will go to Mexico City to receive a treatment to walk again. When Carlos sees Luis and Marissa kissing, he gets furious.

Luis tells Mariana that she’s going to be left without a cent because all of Fernando’s inheritance belongs to his daughter. Adelina convinces Pedro not to escape for Fernanda’s sake.

Isabela warns Camila to move away from Carlos. She also tells her that Fernanda dated Carlos. Mariana threatens Fernanda with firing her.

Mariana threatens Amelia with killing Fernanda if she tells the truth to Fernando. Fernanda finds out that Pedro knows she is not his daughter.

Javier and Fernanda agree not to tell Pedro that Amelia is back. Luis and Amelia meet. Mother Rosaura tells Amelia she does not believe that she is truly regretful.

Fernanda tells Mariana that she doesn’t want Mr. Fernando to find out that she’s his granddaughter. Luis is furious when he learns about Ordoñez’s plans and is determined to get rid of him.

Blanca tells Amelia that she found Pedro, but that he never wants to see Amelia again. Luis threatens to send Ordoñez to jail for stealing his documents.

Mariana suggests Fernando fire Fernanda. Cesar and Clarita get married. Isabela is furious because neither Carlos nor Fernanda are at the party.

A social worker comes to take Paco to a children’s home. Carlos is determined to adopt Paquito at any rate. Pedro is upset to know that Fernanda made up with Carlos.

Pedro and Fernanda are very happy over the fact that Pedro is being discharged from the hospital. Blanca tells Mariana she knows she is trying to harm her father.

Carlos is fretting over the results of the scan Marissa underwent. Adelina is thrilled to see her mother. Leopoldo confronts Luis about smearing his reputation and getting him in trouble.

Carlos is told that Marissa suffers from muscular dystrophy. Fernanda finds out that Lucero and Diego are going to get married secretly.

Carlos and Clarita hope that Marissa doesn’t forgive Luis. Amelia shows Mariana that she’s not afraid of her.

Lucero’s mother tells her she won’t give her any money now because she got married in secret. Carlos is shocked to hear Marissa tell Ordoñez to stop the divorce proceedings.

Mrs. Zamora disowns her daughter Andrea for eloping with Diego. Carlos goes to the orphanage to visit Paquito whom he wants desperately to get out of there.

Marissa has a hard time accepting and forgiving Luis. Carlos and Fernanda spend the night together.

Pedro is very worried and is afraid that Fernanda already knows that he’s not her father. Carlos threatens with killing Luis if Marissa dies.

Luis taunts Fernanda when she is arrested and tells her she should have never messed with him. Fernanda can’t believe Camila betrayed her