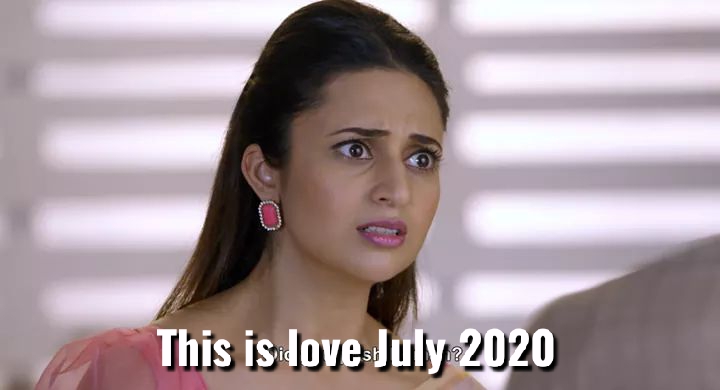 This is love July teasers 2020: The Bhallas execute their plan against Natasha. Later, Arijit learns the truth while Yug finds Dr. Mishra dead in his house

Arijit is terrified when his daughter goes missing, while Karan grows impatient to wed Ruhi. Later, Arijit spots a familiar face in the Bhalla Mansion.

Yug surprises Ruhi with a unique gift while Arijit assigns a task to Bhuvan. Later, the celebrations for Dahi Handi begin with a dance performance.

Arijit gets suspicious of the pundit’s identity during Karan and Ruhi’s ring ceremony. Later, the Bhallas are petrified when an armed stranger interrupts the ritual.

Natasha stuns the Bhallas with her revelations, while Raman suffers a panic attack. Later, shocking facts about Raman’s surgery come to light.

Arijit tricks Natasha into getting a DNA test done on Raman. On the other hand, Karan decides to postpone his wedding.

Raman locks himself in a room after Natasha creates a scene. Meanwhile Arijit plans to forge Raman’s DNA reports.

The Bhallas hatch a plan to gather information about Natasha. Later, they are in for a huge shock when she shows them Raman’s DNA report.

Raman announces a shocking decision to his family. What do you think it could be?

Yug struggles to get details about Natasha while Arijit hinders his progress. Later, Raman states that the man who tried to kill him is supporting Natasha and Sunil.

Raman and Ishita lay a trap for Natasha.

Natasha plans to take Raman out on a date while a cunning Arijit overhears Karan’s secret plan. Later, she gets romantic with Raman when the lights go out.

Natasha tricks Raman into carrying her. Later, she threatens to defame Raman while Arijit makes a solemn promise.

The Bhallas execute their plan against Natasha. Later, Arijit learns the truth while Yug finds Dr. Mishra dead in his house.

The police arrest Yug on charges of murder, while Natasha spikes Raman’s drink. Later, Arijit rejoices the success of his evil plan.

Karan is in a dilemma as the lawyer asks him to alter his statement to save Yug. Later, the Bhallas get unexpected news when they reach the police station.

After meeting Mrs Mishra, Arijit decides to use her as his trump card.

The Bhallas are stunned when Natasha blurts out the truth while Arijit sets his plan in motion.

The police get a vital clue proving Yug’s innocence.

Arijit instigates Mansi to seek revenge against the Bhallas while Natasha is confused about his intentions. Later, Arijit hands Mansi a gun.

Yug is terrified when Mansi points a gun at him!

Arijit executes his master plan while the Bhallas are worried about Ishita.

Karan, Yug and Ruhi try to learn about the person posing as Raman.

Natasha drops a bombshell about Raman in order to mislead Ishita.

Frustrated with doubts over his identity, Raman loses his cool!

The Bhallas are left dumbstruck by Mamta’s confessions. Meanwhile, the police search Natasha’s house for evidence.

Ishita spots an unconscious Neeti Guha at the hospital.

While Ishita offers to help Neeti, Arijit panics upon overhearing her talk to the latter’s caretaker.

Raman is infuriated by Ishita’s fixation on Neeti.

Arijit assumes that Bhuvan has turned against him and threatens to kill him. Later, Sunil makes a shocking remark while Natasha returns after receiving bail.

Ishita finds a vital clue about Neeti while Bhuvan and Arijit come up with a clever plan. Later, Raman is stunned by Yug’s massive blunder.

Arijit learns a shocking fact from the chemist while Aliya and Ishita get distressing phone calls. Later, Raman hurts Yug with his harsh words.

Arijit executes his sneaky plan against the Bhallas.

Natasha storms into the Bhalla House and demands to meet Shardul. While the family prepares for Karva Chauth, Arijit decides to help Natasha.

Ishita puts forth a request to Raman during the Karva Chauth function.

Raman lands in trouble while trying to help an injured man. Later, a furious Natasha asks Sunil and Tara to leave the house.

Natasha threatens to expose Arijit while the police ask the patient for his statement. Later, Arijit gets shocked upon spotting the Bhallas at the hospital.

Karan gets a leading clue while the Bhallas track Arijit down. Meanwhile, an irritated Ruhi throws Natasha out of the house.

Arijit blows up Thiya’s house while the Bhallas storm into Natasha’s residence. After key evidence is revealed, Sunil and Natasha start blaming each other.