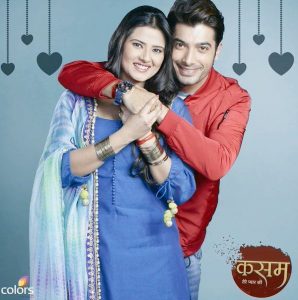 A Promise of Love Glow Tv: Tanu Khurana and Rishi Singh Bedi are friends like their fathers in Patiala. Katyani Bai prophecies they will be together for next 7 births. Rano who dislikes Tanu tricks Raj into going to America. Tanu and Rishi part ways but vow to unite.

Tanu desperately waits for Rishi, who returns to India. Veerendra and Sharda die in a terrorist attack. Bani sends Tanu to Mumbai and misleads Bedis that Neha is Tanu, and Tanvi as real one’s name. Rishi gets engaged to Neha, but falls in love with Tanvi who is set to wed Pawan, an already married man who wants to use her as surrogate—a truth which later comes out. Tanvi reveals she is Tanu and marries Rishi. Neha lies to Sandy that he molested her so Sandy tries to harm him but mistakenly kills Tanu. Rishi is shattered. Sandy’s sister-in-law gives birth to Tanuja.

Tanu, reincarnated as Tanuja, lives in Amritsar with Sandy. Rishi has lost his faith in love. Tanuja becomes his secretary. Fire breaks out, badly burning her face. She gets Tanu’s face, whose photo mistakenly was given by Priti to doctor.

Tanuja wakes up; seeing her changed face, she is shocked. Rishi decides to remarry Malaika to move on, but Raj learns her truth and makes Tanuja marry him. They slowly get close, realise their love and consummate their marriage after Malaika is exposed and thrown out. Katyani tells Tanuja that she’s a bad omen for Rishi. As Tanuja demands divorce, he gets engaged to Netra to make her jealous. She finds out Katyani lied to her and confesses her love to Rishi.

As a misunderstanding arises between Rishi and Tanuja, She leaves. He goes to stop her and in an argument, slaps her in anger. They part ways. Tanuja realises her pregnancy but vows to raise her child single-handedly.

Tanuja lives with Natasha and Abhishek in London, who pretends to be her husband, and they reach India. Rishi and Netra also pose to be married. He and Abhishek become business partners. Rishi meets Natasha, unaware she is his child, who enrolls in Tanya’s school. When Rishi comes across Tanuja, he is disheartened believing she is Abhishek’s wife and they’ve a daughter.

Rishi learns he is Natasha’s real father, and confronts Tanuja who refuses to return. Abhishek who now loves her discovers their past. Rishi finds out Tanuja didn’t marry Abhishek. Upon learning he didn’t marry Netra, Tanuja unites with him. Heartbroken, Netra arranges a trap to kill them. Abhishek finds out but is late to inform Tanuja. Netra is jailed. Tanuja dies. Depressed, Rishi commits suicide.

Rishi and Tanuja take rebirth as Ranbir Kapoor, a famous footballer in Canada, and Kritika Kohli, who lives in Ludhiana. Believing Arun died, Malini is shocked after seeing him in news and enters Mumbai with Kritika to meet him. Ranbir arrives there for a football match. Malini dies due to injuries from fire. To fulfill her last wish Kritika finally meets Arun who introduces her as his niece. She comes across Ranbir, who falls for her; they become friends.

In the end, Ranbir professes his love for Kritika who recalls their previous lives. They recognise and hug each other and unite .

A Promise of love Full casts.