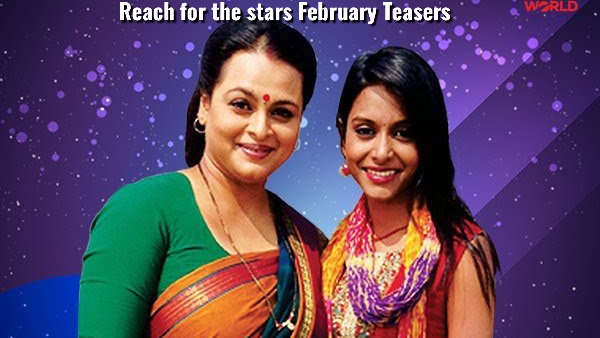 Reach for the stars February teasers 2020: Kamla, a woman from a poor background is pregnant with her second child. She plans to stop working in order to nurse her baby but destiny has different plans for her

Monday 3 February 2020
Episode 1
Kamla, a woman from a poor background is pregnant with her second child. She plans to stop working in order to nurse her baby but destiny has different plans for her.

Tuesday 4 February 2020
Episode 2
Neetu and Kamla both give birth on the same day. Vithhal finds out that his wife has been working for the man who snatched their jobs at the mill.

Wednesday 5 February 2020
Episode 3
Two mothers, different destinies. Kamla is happy and enjoying the presence of her new born but Neetu is finding it difficult to care for her baby.

Thursday 6 February 2020
Episode 4
Neetu gets desperate to the point where she begs Kamla for her help with her baby.  Neetu has no choice but to depend on Kamla, she is her last option to keep her healthy.

Friday 7 February 2020
Episode 5
Kamla is neglecting her daughter’s needs in order to help feed Neetu’s baby. Kamla hopes that her children will have a better and brighter future. She proves that she will do anything for this to come true.

Monday 10 February 2020
Episode 6
Vitthal opens a food stall in order to support his family. However, he is faced with a challenge that takes him out of business. Kamla and Neetu’s babies get switched by mistake.

Tuesday 11 February 2020
Episode 7
Neetu is shocked to see Kamla’s baby in her house instead of her own. Even after the confusion is ironed out Neetu continues taunting Kamla.

Wednesday 12 February 2020
Episode 8
Neetu keeps taunting Kamla, this time she blames her for Phaki’s health condition. Kamla brings joy to her husband by helping get his business back.

Thursday 13 February 2020
Episode 9
Sahil is putting together a conniving plan to take over the land that Kamla and her community live on. A shocking event takes place and Vitthal is accused of a severe crime.

Friday 14 February 2020
Episode 10
Sahil helps Kamla get Vitthal released from prison.  Kamla then shows her appreciation by swearing willingness to be there whenever the Kapoors need her.

Monday 17 February 2020
Episode 11
Neetu realises that her daughter is closer to Kamla and not her. Sahil’s sly plans might not go ahead as planned.

Wednesday 19 February 2020
Episode 13
Kamla takes Kalpana to work. Kalpana witnesses how Pakhi has her mother’s full attention. Both Kalpana and Pakhi buy Kamla the same gift for her birthday, and demand she wear theirs first. Who will Kamla please?

Thursday 20 February 2020
Episode 14
Raghav comes to stay with the Kapoor’s and Prem is not happy. Kamla swears to make Raghav feel at home. Pakhi fails her exams and Kamla asks Kalpana to teach her. Neetu can’t stand to see the helper’s daughter teaching her own.

Friday 21 February 2020
Episode 15
Neetu hires a tutor for Pakhi but she swears to make his life difficult. Seeing Pakhi fool around, Kamla refuses to talk to her. Kalpana looks on and tries to help Pakhi. Pakiya teaches Manda a lesson.

Monday 24 February 2020
Episode 16
Kamla sees Raghav upset and missing his father. Raghav helps Kalpana solve a maths sum and gives her a pen as a reward. A jealous Pakhi, wants the pen for herself, while Kalpana refuses. Whose side will Kamla take this time?

Tuesday 25 February 2020
Episode 17
Vitthal tells Kamla that he won’t allow her favouring Pakhi above their own daughter. Kamla realizes that Pakhi needs to be taught some life lessons. Prem frames Kalpana of stealing.

Thursday 27 February 2020
Episode 19
Raghav asks Kamla to help get his passport back from Sahil. Kamla is torn between being loyal to her employers and helping Raghav. Kamla comes across Raghav’s passport. Will she steal it for Raghav?

Friday 28 February 2020
Episode 20
Raghav has to leave the Kapoor house without being seen and Kamla is his only way out. He eventually ends up in Kamla’s house. Kamla feels guilty for helping Raghav. Manda wonders if Kamla is behind Raghav’s disappearance.

Next month teasers on reach for the Stars