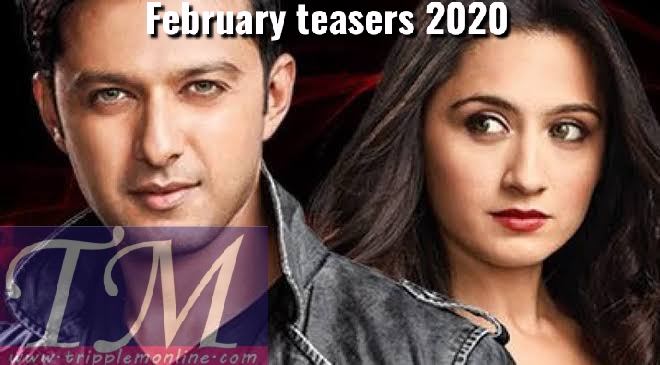 Dev is the new target and Durga suspects Shaurya meanwhile she continues with her plan.

Monday 3 February 2020
Episode 68
Sakshi instructs Shekhar to gather information about Durga and decides to help Shekhar in his business. Meanwhile, Durga arrives in the Goenka house, where she praises Dev to make Shaurya jealous.

Episode 69
Shekhar learns that Durga informed Dr Dayal of instigating Shaurya against Dev. Shaurya feels Dev is trying to impress Durga and decides to murder him.

Tuesday 4 February 2020
Episode 70
Dev learns Shaurya is jealous of him and decides to discontinue the hospital project. Meanwhile, Shaurya hires a contract killer to murder Dev. Sakshi decides to host a party and invites Shekhar.

Episode 71
Durga confronts Shekhar for not inviting her for his wedding. She tells Shaurya about Shekhar’s proposal to her. Shekhar tells Sakshi Durga has changed. Sakshi gives Shekhar a chance to prove the same.

Episode 73
Dev learns the accident had been planned to kill him. Rajnath suspects Shaurya’s involvement in the accident. Will Dev find his attackers?

Thursday 6 February 2020
Episode 74
Dev hands over Payal’s case files to Shaurya and informs him that he is no longer investigating the case. However, a suspicious Shaurya plots to kill him.

Episode 75
Dev informs Durga that Nitya presented the locket to him. Meanwhile, Shekhar learns Durga has been hospitalised but is unable to find her. Sakshi fails to get information from Dr Kane, who operated on Durga.

Friday 7 February 2020
Episode 76
Gautam informs Durga that Dev was in love with Nitya and requests her to return Nitya’s diary to Dev. Durga misleads Shekhar about her identity and challenges him to prove her true identity within 24 hours.

Episode 77
Dr Dayal assures Durga about Dev’s innocence. He suspects someone to have hacked into Dev’s account and e-mailed Durga. Rajnath is unhappy with Sakshi’s decision to invite Dr Dayal and Durga for the puja.

Monday 10 February 2020
Episode 78
Shekhar learns about a birthmark on Durga’s leg. He comes to the Goenka House and claims Durga is an impostor. The Goenka family pretends to support Durga, and Sakshi slaps Shekhar.

Episode 79
The Goenka family is shocked to see Durga’s birthmark. They throw Shekhar out, but Durga confronts the Goenkas for allowing him to question her identity.

Tuesday 11 February 2020
Episode 80
Sakshi persuades Shekhar to leave Kolkata. In order to trap Shekhar, Durga informs Dr Dayal that she has edited his daughter’s pictures. Rajnath advises Sakshi to stay away from Durga, but in vain.

Wednesday 12 February 2020
Episode 82
Shaurya introduces the contract killer, Aleena, to his friends and shows Dev’s pictures to her. Meanwhile, Durga and Dev visit the Goenka house. Durga apologises to Rajnath and Sakshi.

Episode 83
Durga suspects Shaurya behind the extortion calls; feels Dev is in danger and that someone is trying to trap Dev. Meanwhile, Aleena shoots Dev and Shaurya clicks photographs of the incident.

Thursday 13 February 2020
Episode 84
Suchitra finds out about Dev being shot and panics. Shaurya learns that Durga and Dr Dayal have admitted Dev to a hospital. Sakshi suspects Shaurya’s hand behind Dev’s attack.

Episode 85
Durga suspects Shaurya’s role in Dev’s attack. The CBI officers question Shaurya and Rajanth. Shaurya is not very happy to know that Dev is out of danger. Dr Dayal suspects a professional killer to have shot Dev.

Friday 14 February 2020
Episode 86
Dev regains consciousness and finds the locket missing. Durga returns the locket to Dev, and he finds out that Durga rescued him. Meanwhile, Sakshi informs Rajnath that she suspects Shaurya behind the attack on Dev.

Episode 87
The CBI officers question Dev. Dev learns that Payal changed her statements in the court. He informs Durga about wanting to meet Payal. Meanwhile, Sakshi gives Rs 5 crore to Karan in order to cancel the bet.

Monday 17 February 2020
Episode 88
Durga recalls Sakshi asking Payal to marry Shaurya; persuading her to change her statements. Dev tells Durga that he did not send the email. Durga feels guilty of misunderstanding Dev.

Episode 89
The CBI officers inform Rajanth and Sakshi about Aleena being hired to kill Dev. Sakshi feels the attack could have been planned by his business rivals. Meanwhile, Shaurya confesses his crime to his parents.

Tuesday 18 February 2020
Episode 90
Durga and Aakash learn about Shaurya’s crime. She decides to take revenge on Shaurya. Meanwhile, Shaurya pleads his parents not to inform the CBI about it.

Wednesday 19 February 2020
Episode 91
Durga takes Dev to Dr Dayal’s farmhouse, where he meets Payal and asks her about Nitya. Meanwhile, Dr Dayal informs Rajnath and Sakshi that Durga will no longer be part of the project.

Episode 92
Durga hands over Nitya’s diary to Dev. She informs him about her marriage to Shaurya and Dev agrees to attend the engagement. Meanwhile, Sakshi informs Raima about changes in Shaurya’s behaviour.

Episode 94
Sakshi and Dev congratulate Durga on her engagement. Dr Dayal introduces Neil to the Goenkas. Durga and Neil plot against Shaurya. Raima congratulates Durga, while Rajnath and Sakshi are shocked to see Shaurya there!

Friday 21 February 2020
Episode 95
Shaurya attends the engagement party, but refuses to dance with Durga. Neil is worried when Shaurya does not fall prey to their plan. Durga is upset on recalling her engagement with Dev.

Monday 24 February 2020
Episode 97
Sakshi blames Durga for Shaurya’s suicide attempt. Durga decides to stay in the hospital till Shaurya regains consciousness. Rajnath is upset. A ward boy wants to tell something to Durga.

Tuesday 25 February 2020
Episode 99
Durga assures Dr Dayal that she loves Shaurya. She puts the engagement ring on his finger and tells Shaurya that Sakshi will never accept their relationship. Dr Dayal takes Durga away forcibly.

Episode 100
Durga tells Shaurya that Dr Dayal is against their relationship. She also tells him and Sakshi about her moving to the US. Meanwhile, Dev vows to prove Nitya and Payal’s innocence.

Wednesday 26 February 2020
Episode 101
Sakshi learns that Payal is Durga’s weakness. Dev questions Durga if she really loves Shaurya. Durga assures Dev that she is in love with Shaurya, and tells him not to probe him on personal matters.

Episode 102
Durga and Dr. Dayal visit the Goenka house, where Sakshi suggests conducting Durga and Shaurya’s engagement on the same day. The duo get engaged. Later, Sakshi decides to resolve her mix-ups with Durga.

Thursday 27 February 2020
Episode 103
Sakshi takes Durga to her native place and narrates incidents of her past. Sakshi recalls the time she was forced snatch a slice of bread from a dog’s mouth for her survival.

Episode 104
Shaurya takes Durga out for lunch, where he sees Kangana with Karan. Shaurya confronts Kangana, who says she is planning for a surprise party with Karan.

Friday 28 February 2020
Episode 105
At the Goenka house, Dr. Dayal, Durga and Sakshi discuss about the wedding with a priest. Aakash keeps an eye on Shaurya and Durga, even while they share an intimate moment.

Episode 106
On learning that Shaurya might die, if he marries her, Durga breaks the engagement. Shaurya suspects that Sakshi bribed the priest. Meanwhile, Suchitra decides to seek a second opinion regarding Shaurya’s compatibility with Durga.

Not Without my Family teasers February 2019