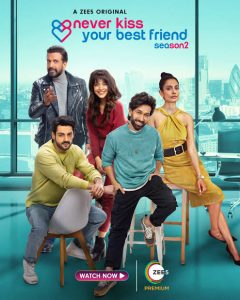 Zee world started a mini series titled Never kiss your best friend to replace I’m on the edge. It follows Estranged friends Tanie and Sumer who reunite coincidentally after years of separation when they both end up working in London.

They recount their past and the cause of their split, then in between, they find that they could actually be more than friends…

27-year-old Tanie lives a monotonous life with no real friends, no love life, and a sad job. One night, she runs into Sumer, her former best friend, after seven years. A moment sparks off the memories and transports them back in time.

Sumer and Tanie reconnect and remember the time when he came into her life – first as a neighbor, then as a friend and eventually as her best friend. However, their relationship changes when they meet their respective partners.

Sumer sets up Tanie on a date, but she walks out mid-way and reaches his film set only to discover a shocking truth. A glimpse into the past reveals Sumer and Tanie’s first fight, after which Sumer broke up with his then-girlfriend, Laika.

Sumer reaches Tanie’s house to clear the misunderstanding between them. He helps her set up her new house and spends the night at her home. While in the past, Sumer gets suspicious of Tanie’s then-boyfriend and decides to expose him.

Sumer and Tanie go to Sumer’s film set only to find it in a mess. In the past, Tanie reached out to Sumer in a vulnerable moment after discovering something unpleasant about her boyfriend, and the two ended up kissing each other.

When Tanie’s suggestion on Sumer’s set backfires, they have a huge fight, but end up coming together for a common friend. In the past, Tanie get to pursue her MBA at Cardiff. On her farewell, they promised to continue to be best friends.

Tanie decides to make amends with Sumer. But, before that, she discovers a deep secret about him, which could change everything between them. In the past, Tanie, despite her new life, misses Sumer, who surprises her with his decision.

In the present, Tanie realizes that she has feelings for Sumer, despite all these years. While in the past, Tanie tags along with Sumer to a party in Cardiff, only to find both of their lives changing after it.

Tanie is all set to confess her feelings to Sumer, but a sudden situation changes everything. A peek into the past reveals how Tanie and Sumer realized an important life lesson and decided never to fight again.

Sumer is leaving London and Tanie’s life. Will the two realize their feelings for each other especially after everything they have been through?