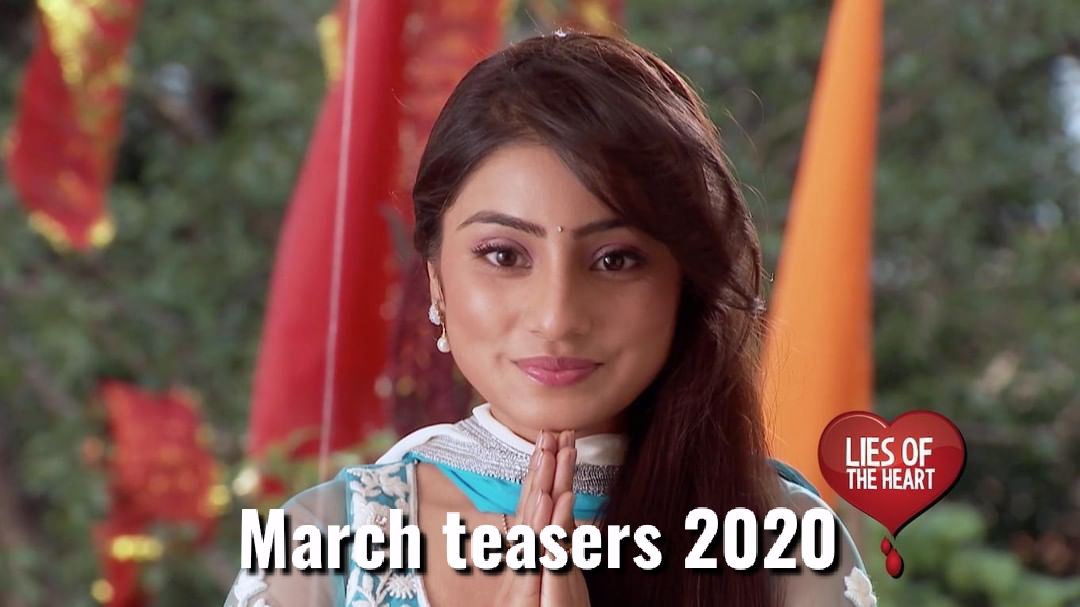 Lies of the heart March teasers: Urmi gets the shock of her life after Samrat begins to show his true colours after their wedding.

Urmi has to do a feeding ritual and Anu invites Ishan. Shashi visits Urmi’s family and the family start to worry as soon as she arrives. Shashi makes an expensive demand from Urmi’s family.

Urmi is very heartbroken to see her family stressing about the money for the gold chains. Urmi refuses to marry Samrat and he wants to know from his family what changed. He finds out about Shashi’s demands and forces her to go apologise.

During the sangeet ceremony Samrat insults Trisha by throwing money at her. Sashi feels very insulted by this and Samrat decides to have a chat with Urmi about this.

Samrat wants Trisha to not attend the wedding and tells Urmi that Trisha doesn’t like him. Urmi believes his side and questions trisha. It’s the day of the wedding and all Urmi can do, is dream about a happy life and future with Samrat.

It’s the big day and Samrat’s friends ask the couple to ask each other a difficult question. Samrat tells Urmi how happy he is that she sent Trisha away. Samrat begins to show his true colours as soon as the wedding is over.

Urmi starts to see a different side of Samrat. Saroj accidentally hears Trisha’s views on Samrat. Urmi dreams of a perfect wedding night but instead, she is woken up by a very different samrat.

No teasers for today.

Saroj overhears Rashmi and her mother talking about Samrat’s behavior and she decides to ask Urmi about it. Samrat is supposed to pick Urmi up from her parents house after the ritual, but he sends Ishan instead.

Urmi convinces Samrat to try the jersey on and she shares a few happy moments with him. She calls Trisha and she shares how happy she is with her. It’s Urmi’s cooking ritual and she looks forward to seeing Samrat’s reaction.

Urmi sees the honeymoon package in Samrat’s drawer and misunderstands that they’re going on holiday. Trisha’s parents visit to see Urmi. Samrat uses the opportunity to insult Trisha once again.

Shashi seems to want Urmi to have problems with Samrat. Anu tells Urmi about the way Samrat insulted Trisha and she gets upset. Ishan gives up on helping Samrat and he breaks their friendship.

Ishan books tickets to leave, but Samrat tears them up. Urmi tells Ishan that Samrat isn’t that bad and that she knows he planned a surprise honeymoon. Shashi receives a strange call from someone asking for money.

Urmi asks to go home with Anu, but Samrat refuses and he reminds her that she is now a married woman. Anu has started to see Ishan in a new light. Sashi overhears Urmi tell Ishan about the Goa honeymoon and wants to ruin the trip.

Shashi tries her best to stop Samrat and Urmi from going on a honeymoon. Anushka is heartbroken after she finds out Ishan is going back to London. Samrat makes it clear to Urmi that he is going to Goa, with or without her.

Ishan starts to realise that Anushka is in love with him. Samrat’s father takes a video of Sashi in secret, just to prove she isn’t really injured.

Anushka tells Ishan about how she feels about him. Urmi is so happy about the honeymoon that she even forgets to pack the flight tickets. Saroj finds Anu’s diary and it leaves her worried and upset.

Saroj informs the whole family about Anu’s diary. Samrat refuses to be seen with Urmi for as long as she wears the traditional clothing. Urmi catches Samrat red handed staring at another woman at the beach.

Samrat, Urmi and Ishan are at a beach party. Samrat realises that Urmi is being her serious, conservative self. He decides to spike Urmi’s drink so that she loosens up. A strange man ends up dancing with her and he is left fuming.

Urmi gets the hotel staff to decorate their room in order to suprise Samrat. After reading about her newborn niece in the newspaper, Aditi goes to visit the house to see the baby.

Samrat and Ishaan get into a fight about how he treats Urmi. Ishaan then swears to not ever want to see Samrat’s face again.

Samrat continues ill treating Urmi to the point where he deprives her of spending time with her family. Will Samrat’s tyranny ever come to an end?

Shashi gives Urmi permission to visit her mother’s house, but only because she has her own hidden agenda.  Question is what is Shashi up to this time?

Urmi realises that there is an issue after, she sees Samrat questioning everyone about where the baby’s cradle comes from.Sashi lies  to Samrat about the cradle.

Rashmi tells Samrat that, she actually didn’t name the baby and she didn’t buy the cradle either. Urmi finds out Samrat has a sister and she begins to ask questions about her never being mentioned before.

Samrat’s parents tell Urmi why they abandoned Samrat sister. Even though Urmi disagrees with their decision, they force her not to talk about her. Urmi’s family find out about Samrat’s sister, whom Rashmi has never mentioned before.

Urmi has to decide whether she will help the girl who needed her help, or not. Will Urmi decide to testify against the boys?

Samrat finds out that Urmi actually helped Aditi and he questions her on why she went against his word.  After finding out that Anushka is at Urmi’s mother’s house, Samrat stops Urmi from going to her own father’s birthday party.

Urmi tries to beg Samrat to allow her to go to her father’s party, but he remains stubborn about his decision and he refuses to let her attend the birthday party. Trisha decides to leave the house as she feels like a burden to the family.

Samrat is so relieved that Trisha left, that he even decides to go celebrate the birthday the day after the party. With Trisha gone, what will Samrat’s next move be?

For the first time, Urmi lies to her in-laws about her whereabouts, to hide the fact that she was with Trisha. Urmi goes behind the family’s backs and she hides Trisha.