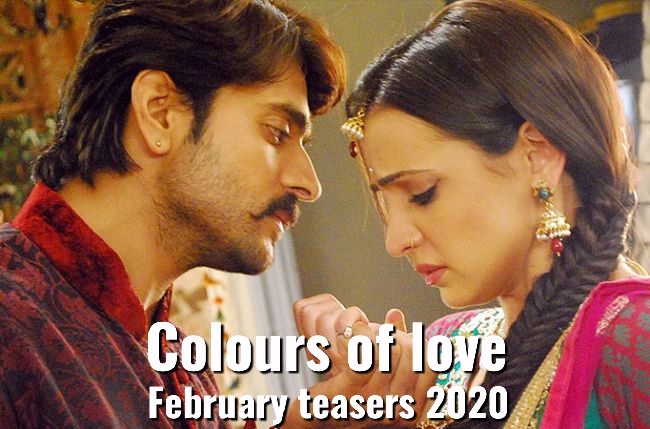 Rudra makes a wedding fire and decides to take his wedding vows, as he marries Parvati with the intention of never allowing her to be happy.

Parvati faints in Rudra’s arms as he brings her inside the house. Maithili tells Rudra that she knows that Paro was not the one who had set the room on fire. A drunken Rudra taunts Parvati when he gets suspended for her action which has been put in the newspaper. How will she deal with this?

Episode 75
A drunken Rudra makes a wedding fire and decides to take his wedding vows, as he marries Parvati with the intention of never allowing her to be happy.

Episode 76
Rudra wakes up the next morning pretending that he doesn’t remember marrying Parvati. Meanwhile, Sumer gets paid for the picture that was leaked to the newspaper.

Episode 77
Rudra is about to find out that Sumer is behind the picture being leaked to the newspaper. How will he react? Meanwhile, Maithili wants Parvati to help Rudra realize that he has feelings for her.

Episode 79
Rudra tries to be romantic and sing to Parvati when the social workers are nearby. How will she react to this?

Episode 80
Mohini goes out of her way to hurt Parvati so that they can blame Rudra for the torture, but it seems as though a tactful Parvati knows how to handle this situation. What will she do?

Episode 81
Damyanti is impressed by Parvati’s love for Rudra and promises to give a good report on her husband.

Episode 82
Parvati is disappointed when Rudra refuses to take her with him to Jaipur, but everything changes when he sees a wound on her caused by Mohini.

Episode 83
Rudra realizes his mistake and tries to take care of his wife. Meanwhile, Parvati gets invited to their party. Will she wear a new Sari?

Episode 84
Rudra and Parvati have a good time with one another as they dance together at the party, but it seems as though her drink may be spiked by someone. Will everything be fine?

Episode 85
Parvati wakes up hungover and feels humiliated for her actions from the night before. How will Rudra react to her?

Episode 86
As Parvati and Maithili prepare for a Pooja, Mohini brings her poisonous sweets. Meanwhile, Rudra consoles Parvati for making her feel bad.

Episode 87
Rudra gets upset when he finds out that he only got his job back because of Parvati. Meanwhile, Rudra is about to eat the poisoned laddoo.

Episode 88
Rudra is rushed to the hospital when he is in a critical condition. Mohini attempts to Murder Rudra while he is there. Will she succeed?

Episode 89
Parvati is on to Mohini and feels as though she is behind the poisoning of her husband. Will she find any evidence against her?

Episode 90
Parvati goes to the temple and takes an oath to leave Rudra if God makes him better. Will her oath bring her help and save her husband?

Episode 89
Parvati goes to the temple and takes an oath to leave Rudra if God makes him better. Will her oath bring her help and save her husband?

Episode 90
Everyone puts pressure on Mohini to eat a laddoo in order to prove that she is innocent. Will she give in to the pressure?

Episode 91
Mohini manages to get away with the poison until it eventually kicks in. Will she tell the truth?

Episode 92
Rudra realizes how affectionate and caring he has become towards Paro, whilst Parvati helps soothe his hand from the hurt.

Episode 93
Rudra has an emotional breakdown as he opens up to Parvati about his mother. Meanwhile, Laila is about to come begging for their help as Tejawat wants to kill her.

Episode 94
Mohini encourages Laila to win over Rudra’s family, whilst Parvati gives her man a massage.

Episode 95
Laila breaks a button of Rudra’s in order to be closer to him, but Mohini is about to teach her a lesson for her actions.

Episode 96
Rudra wants to kick Laila out of the house but Parvati stops him. Meanwhile, Laila warns Mohini not to interfere in her matters.

Episode 97
Rudra tries to console Parvati when he sees her in a bad condition. Maithili blames herself for this. Will they all manage to make peace?

Episode 98
Laila gets upset when she sees Rudra spending time with Parvati as they eat. Is she about to try to divert his attention to her?

Episode 99
Laila tells Rudra that he is afraid of Parvati finding out about their relationship. Will Rudra come clean to Paro about everything?

Episode 100
Parvati walks in as Laila hugs Rudra and asks him to stop denying his love for her. How will she react?

Episode 101
Parvati wants to know how Rudra feels about her when Laila tries to brainwash her by making her think that Rudra is only in love with Laila – not Paro.

Episode 102
Rudra arranges a private puppet show at their home when Paro; Maithili and Sunheri want to go out to watch it, but Rudra is worried that Tejawat’s men are still around.

Episode 103
Parvati gets offended by the hints that Laila throws at her with regard to the relationship between her and Rudra. Will she finally allow Rudra to kick her out?

Episode 104
Laila is happy when she realizes that her plans to create tension between Rudra and Paro are working, but everything changes when Parvati allows her to leave.

Episode 105
Rudra wants to spend some time and take Parvati out on a date but his pride and awkwardness gets in the way. Will he manage to change this?

Episode 106
Laila puts her plans into action to return to the Haveli. Meanwhile, Mohini gets upset when she finds out who financed Samrat’s business.

Episode 107
Laila is kidnapped by Tejawat. Will Rudra and his men save her?

Episode 108
Tejawat uses Laila to deliver a message to Paro and Rudra, but it seems as though her mouth may get her into trouble with Tejawat. What is she about to do?

Episode 109
Tejawat wants to strike a deal with Rudra. He wants Parvati in exchange for his mother. Will Tejawat get what he wants?

Episode 110
Parvati is sad when she realizes that she will have to leave Rudra and go away to fulfil her promise made to Lord Shiva. Is she about to confess her love to him?