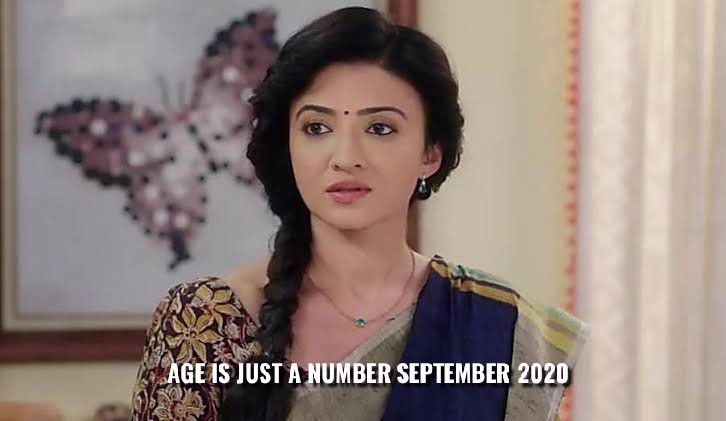 Age is just a number September teasers: Sahil and Vaidiaka get married to save Ved from cancer while Bhoomi feels betrayed  and swore to never let the couple be happy together. Will all their enemies succeed?

There’s a pen drive floating around which might contain Badi Amma secret if it falls to the wrong hands. It’s Diwali celebration and everyone is inn good spirit except the Agrawal villians. Meanwhile Puneesh is planning an attack on the family.

Sahil envisions a new life with Vedika and Ved but Bhumi’s got a devil on her shoulder that might shatter the entire plan.

Vedika and Sahil find themselves locked up on a special day. Punish sets up a bomb that will blow up in Vedika’s face.

It is Arya’s birthday celebration tonight and just for once the family seems happy, or not?

Sahil is missing and Vedika gets charged. Arya is attacked by Puneesh’s wife.

Vedika’s life is in turmoil she is arrested for Sahil’s murder. Bhumi took Ved and Arya has a nasty surprise for her as well.

Vedika runs around in search of Sahil but a mysterious caller comes to her aid.

Sahil is acting indifferent, raising suspicion. Prachi has had enough of Arya.

Puneesh is planning a big takeover of the Agarwal family and business estate. Vedika is determined to do everything in her power to stop the takeover from happening but she has a bumpy road ahead.

Vedika is on the witch hunt to find the people who are working with Puneesh in the kidnapping of Bhumi and Ved. Will Vedika ever find Ved and Bhumi’s whereabouts?

Vedika manages to reach the building and finds Arya and Ved hanging from the ceiling. She also finds Bhumi there, held captive.

Puneesh arrives and tells her that only one of her children will survive. Jackie rescues Arya and Ved. Jackie agrees to help but being a criminal his real plan is to steal from the Agarwal household. Owing to Jackie’s smart move, the police arrive in time to hear Puneesh’s confession and arrest him.

Ved is reunited with the Agarwals. Vedika realises Ved cannot live without Sahil. Jackie is adamant to stay back for Ved’s sake. Vedika tells Jackie about Sahil so that he can become like him.

Bimla tells Vedika that she would stand by her and regrets her past behaviour. Vedika holds Jackie’s hand and applies Sindoor on her forehead.

Usha comes to the Agarwal house, shocking Jackie. As Jackie is Usha’s adopted son, she wants him to rob the Agarwals and get her the wealth even if he has to die for it.

Jackie tells Usha he will never leave Vedika because he is Sahil Agarwal and not Jackie. Manjula sees a birth certificate stating that Anjana and Ishwar Agarwal had twin baby boys. Bhumi arrives and it is revealed that she has teamed-up with Usha to destroy Sahil and Vedika’s relationship.

The goons follow Vedika and Sahil, but they trick them and escape. They take refuge in a small hut and spend the night there. Vedika sees Sahil, and he tells her he is Jackie, Sahil’s twin brother. The confusion in the Agarwal family regarding Sahil and Jackie is unbearable.

Guddu enters Arya’s room by mistake, and the two engage in a silly fight. Later, when Sahil sees Vedika, he tells her that he has been finding it difficult to not think about her. Vedika tells Usha that she and Bhumi won’t be successful in convincing Sahil that he is Jackie. At a restaurant, Pallavi and Sakshi make fun of Arya with respect to her married life.

During the engagement, Bhumi is about to put the ring on Sahil’s finger, but Vedika interjects and sings a song. During the song, their memories flash through Sahil’s mind, and he puts the ring on Vedika’s finger instead! Mandakini daydreams about Deepak.

Vedika performs at the school christmas function and tries to remind Sahil that he was really Sahil and not Jackie.

Guddu confesses his feelings for Arya. Sahil witnesses a challenge between Usha and Vedika to prove if he is Sahil or Jackie.

Bhoomi poses as Vedika to make Sahil believe that Vedika was being untruthful with him. Thinking about Vedika’s betrayal, Sahil decides to marry Bhumi within three hours. Vedika kidnaps a drunk Sahil from the marriage ceremony.

Sahil falls unconscious and the Agarwal family get tensed. Guddu and Mandakini apologise for their mother’s deeds. Vedika hugs Sahil out of concern, but he fails to recognise her or anyone from the family, leaving all in a shock. When he becomes unconscious, doctor reveals that the past six years of his memory is lost.

Sahil saves a girl from getting dashed by his motorbike. Guddu proposes marriage to Arya and she asks the family for a live-in relationship. Sahil learns through a note in a bouquet about Maya going through domestic abuse. Raghav is about to set Maya ablaze.

Raghav sheds crocodile tears in front of the reporters assuming Maya to be dead but to his surprise, Vedika, Sahil and Maya appear alive. Tej Pratap’s goons tie up Sahil assuming him to be Pankti’s friend. Pankti assumes that Sahil too has been sent by her dad to capture her.

Pankti’s mother requests Sahil to help Pankti get out of the impending forced marriage. Elsewhere, the priest tells Bimla that a life-changing event is about to take place which would affect Sahil’s personal life in a big way. Sahil marries Pankti and brings her home, but a devastated Manjula stops her from entering the house.

Pankti is taken to be a tenant for the Agrawals and Sahil agrees to it. Sahil loves the food prepared by Pankti and kisses her hand to compliment her. Vedika overhears their talk and recollects her old memories.

Sahil takes Arya and Guddu to Vedika and argues in support of their live-in relationship. Tej Pratap catches Pankti’s mother off guard while she is going through the pictures and sends his goons to beat Sahil up

A maid in Sahil’s house informs Tejpratap that Vedika has a son with a poor medical condition. She spreads water on the floor which leads to Ved meeting an accident.

Vedika walks in, draped in a blue saree and Sahil could only stare at her open-mouthed. Pankti’s mother tells Pankti that she will commit suicide if Sahil and Pankti don’t unite as a couple. Vedika suggests Manjula to prepare for Arya’s marriage than worry about Vedika’s future.

Vedika tells Pankti about taking Sahil to a Dargah, shrine of a Muslim saint, that has helped their love earlier. A mishap during their visit to the Dargah sets them apart. Shaken up, Vedika talks to a cop while Sahil eagerly follows up at different places to locate her.

Next month teasers on Age is just a number

This is fate September 2020 teasers