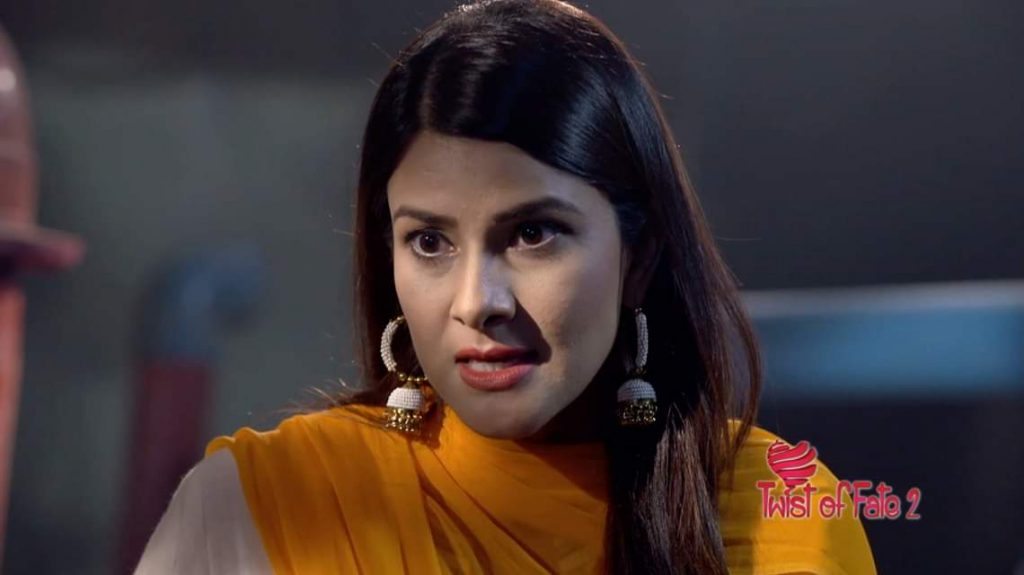 FRIDAY UPDATE ON TWIST OF FATE

Simonika says if they break the door, then snake might come out and bite everyone, and if you go inside then it might bite you. Pragya says Abhi is stuck there and might be scared. Abhi asks snake what it would like to have, and asks chole bature, milk etc. He asks can I go downstairs and bring milk for you. Snake takes out its tongue.

Abhi says I will not go anywhere and asks about its family. He says he will launch snake’s family. He says I will give you insurance and a room in his lonavala room. Pragya prays for Abhi. Taya ji tries to open the door. Abhi gets scared now and asks someone to save him. He says if I die then what will be published in the newspaper. He asks snake not to bite him. Taya ji manages to open the door. Pragya says I will go inside. Dasi says if snake bites you.

Pragya says nothing will happen to me and goes inside. Tanu thinks if Munni manages to save him then he will get impress with her. Pragya comes inside and asks Abhi to calm down. Abhi says you left me inside and was standing out. Pragya asks him to calm down, but shouts when snake hisses.

Abhi says if this snake bites me then I will not leave you, will take revenge and will scare you becoming ghost. Pragya asks him to be silent and let her think what to do. Tanu peeps inside the room. Pragya brings towel in her hand and throws on snake. Snake falls down. Pragya falls on Abhi and says snake is going. Tanu peeps inside and says Munni is on Abhi now. Aaliya says if snake comes out then will kill us. Taya ji asks what is happening inside.

Tanu says munni saved Abhi and cries. Taya ji asks her to be grateful to God that Abhi is saved. Dasi says Munni went inside alone and saved him, she is really courageous. Taya ji says snake is inside still and says they shall call animal welfare. Tanu cries and says Munni took advantage of the situation and saved him. Now he will fall in love with her and will stick to him. Aaliya asks her to be quiet and says if snake bites anyone. Simonika is angry hearing Pragya saved Abhi. Aaliya asks Tanu you would have gone to save Bhai rather than crying.

Mitali asks Simonika if she is not happy as Abhi is saved. Simonika says it is good and says she will keep the file in study. Mitali says she is strange girl. Pragya asks Abhi where is the snake and says she can’t see. Abhi says you can’t see and starts fighting with her. He says you made me wait and goes to check the central heater. Pragya is about to tell him about the conspiracy, but stops.

Abhi sees snake on sofa and pulls Pragya towards him on bed. Tanu says I have no scope, my career has ended and says I am not Jhansi ki rani to keep fighting and keep losing. Aaliya says Munni is a villager and that’s why went inside to handle the snake and asks why you are under estimating yourself. Tanu asks really? Aaliya asks her to have confidence.

He asks if she is impressed. Pragya says anyone can save others. Abhi says I was taking care of snake and asks for food. Pragya says we will call snake and you can send it to its home. Just then she sees snake and shouts. Abhi hides behind sofa.

Sarla telling Pragya that she tried to inform her about Aaliya’s plan, but she couldn’t as Abhi took her forcibly from there. She says I thought to play the CD anyhow, and talked to Mitali, asking her if it is her children’s birthday today. Mitali says yes. Sarla tells her that Aaliya is on stage, and asks her to play her kids’ CD. Mitali agrees. A fb is shown. Sarla says she agreed and did what I said. Dadi praises her plan. Sarla tells Pragya that she would have trusted her, and listened to her atleast. She regrets for slapping her and says I am a bad mum.

Pragya says if you are a bad mum, then I am a bad daughter. She hugs her. Purab asks them to stop their emotional drama, else he will cry. He goes to meet Abhi. Dasi says it was good that Aaliya and Tanu haven’t
come to know about this plan, else they would have made some plan. Dadi says they were ready with their plan.

Abhi thinks who can be Nikita’s enemy who wanted to malign her reputation and tagged her pregnant. Purab comes there. Abhi says he is tired of thinking and asks him to help him. Purab says yes, your secretary is honest and good. Abhi says you was the only one who trusted her and thinks I am her enemy. Purab says that enemy wanted to attack on her image which she built in your eyes. Abhi asks what was their plan, and says I won’t repeat this mistake again and will find out the culprit. They hug each other. Purab thinks it is good that Abhi is trying to find out the truth.

Abhi agrees and asks about third promise. Pragya says I will ask when right time comes. Abhi says I am saved. He says you are not only my secretary, but my support system. He says my factory can’t run without you, and I would have promised you marriage seven vows to you if you had asked. Allah Wariyan plays…..Pragya stares him. Abhi asks shall I read the first vow. Pragya asks him to sleep now and says she is going home.

Abhi asks her to stay at home, and asks shall I come with you. Pragya says it seems I shall go to Palghar. Abhi says okay, good night and sweet dreams. He asks her not to come in his dreams and break his sleep. Pragya asks him to go and change clothes.

Tanu asks Nikhil and Aaliya to stop fighting. Nikhil says you will not win until your stupid friend is with you. He says you would have stopped that CD . Tanu says she didn’t know about that. Nikhil says she should have done proper planning. They fight. Pragya comes there and claps. She says she is seeing their lost effect and asks them to get habituated to lose again.

She says I have changed my plan, I will make you people feel pain. She says I am not secretary, but I am his wife. She asks them to do marriage planning with Abhi, and says she will stop the marriage and make Abhi hers. She says I have returned here as his wife and asks Nikhil to leave else she will kick them out. She asks him to get out of her house.

Aaliya asks her to stop it and says Abhi don’t identify you as his wife. She says you are mad at one sided relation, and says I will kick you out during his marriage. Pragya says I can’t bear him in my house. Aaliya says this is not your house. Pragya says this is my house and I will decide who will come here or not.

Aaliya says you are speaking to guest like this. Pragya says you both are guest here, and asks them to thank her as she is not kicking her out. She says he didn’t remember anything, but I remember everything. She asks him to leave else her hand is enough for him. Nikhil goes. Tanu tells Aaliya, what happened to Pragya today. If Chandi came in her. Aaliya says don’t know, if Abhi sees her talking like this, then what we will answer.

Nikhil asks Pragya to leave his hand and asks what do you think, am I a calf? He asks her to show the strength and kick her out. Aaliya says you don’t have strength. Tanu asks Nikhil not to get worried and says she can’t kick you out. She is just alone, but we are three. Pragya says you can be three, but I have mind who is forced to think about you people. She says I can shout and call Abhi. I will tell him that he was misbehaving with me and you both haven’t stopped him. They get shocked. Nikhil decides to leave.

Aaliya asks Nikhil to go. Nikhil is shocked and says she is just bluffing. She can’t do anything. Tanu asks him to go. Nikhil says I am going now, but will return with a new plan. Pragya asks him to make any plan, but blast will happen from her side. Aaliya signs him to go. Pragya looks at them and goes.

Pragya asks him to drop it. Abhi says he is a man and is afraid of just cockroach and not snake. Pragya asks why did I deny that you are not man. Abhi says now he will tell everyone that he saved them. Simonika thinks Abhi will die soon and her revenge will be fulfilled. Pragya sees window and asks him to throw the snake out. She says she will touch his feet and will tell everyone that he saved them, but Abhi don’t drop
the snake.

Just then snake bites on his hand. He faints and falls down unconscious. Pragya cries as usual and asks him to open his eyes, says nothing will happen to him. She cries and tries to make him get consciousness. Mitali shouts calling everyone. They all come there. Mitali tells them that she checked in Abhi’s room and she saw him unconscious and Munni is crying sitting there.

Aaliya, Tanu and others go there and accuses Munni. Dasi asks them to call doctor first and says it is an emergency. Munni ties cloth on her hand. Tanu asks Pragya to save him being a villager and says if pragya would have been alive, she wouldn’t let Abhi die. Aaliya says she is Munni, an imposter. Taya ji calls Doctor. Simonika thinks now call Pandit who will do his kriya karam. Pragya asks Abhi to wake up. Simonika checks the snake bite and thinks Abhi will die in 7-8 mins. She thinks now Pragya will know how it feels when someone closer dies. She recalls something and a fb is shown. She says good bye Abhi.

Pragya recalls the moments with him while the song main tum ko bhool na pawungi. She recalls Aaliya and Tanu’s words saying if Pragya would been here then she wouldn’t have let him die. She sucks the poison and spit it. Dasi says why you are risking your life. Aaliya comes and says car is ready and says she will not take Munni. Dasi says she has saved Abhi and sucked the poison. Taya ji says we shall take both. Simonika thinks they will die before reaching hospital.