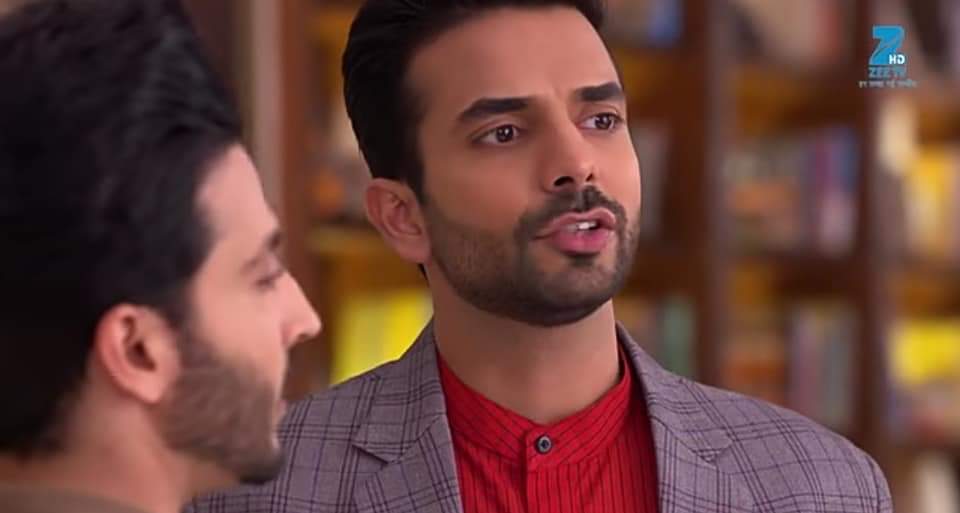 Karan and Preeta comes back home together. They both get drenched in the rain. After getting into the house, Preeta gets angry and tells Karan that he was the one who took her umbrella and now she is definitely going to get sick.

Preeta sneezes and Rashi hears her argument with Karan. She comes to them and asks Preeta to go inside her room. She also tells Preeta she would send the maid with Roo’s clothes. Rashi tells Karan he thought the girl was for Rishab and that she didn’t know he is interested in her as well.

Karan denies any interest. Rashi tells Karan he has watched a lot of Hindi films and realizes all the scenarios and that she wasn’t ready to consider it a coincidence. She says she always wanted a girl like Preeta for him.

Upstairs, Dadi asks Karan to do something about Preeta. Karan smirks and mentions that he has a plan but it will take some time.

On the other hand, Sarla gets worried for her daughters and she tells Biji that she loves her daughters a lot. Biji tells her that she is a great mother and things will be fine soon. After sometime, Srishti starts leaving the house and Sarla asks her where she is going to?

Srishti tells her that it’s none of her business therefore she should not ask anything related to her life. Sarla starts crying and tells Biji that she doesn’t know how much more time will it take for things to get normal.

***
Meanwhile, Preeta changes her clothes and wears Kritika’s clothes. She comes to Kritika and Kritika tells her that she is looking good in her clothes also. Preeta laughs that she realizes she is too short. Kritika had dropped a few photos which Preeta is holding. She then takes her to Rishab ‘s room to make him chose at least one girl from the photographs.

Rishab is busily thinking about Preeta. Kritika asks Preeta to choose a perfect girl for Rishab and shows her some photographs. Preeta watches a photo and says she would have selected one girl she picked as she is really composed, calm and peaceful.

While choosing, Kritika tells Preeta that she looks perfect with Rishab according to her. Rishab and Preeta both feel shy at that moment. Preeta starts to get cold, Rishab offers her a jersey but Kritika says it would only be a medicine.

Kareena is with the wedding planner, she doesn’t appreciate the work the wedding planner has done. Vandy assures Kareena she will send her best team to her on the wedding day. Shrishti comes there, Vandy lies that Shrishti has been working with her for the last 7 years and is an expert. There, Shrishti later comes to Vandy and thanks her for the opportunity, Vandy tells her to stay confident and she will win it all.

Dadi and Preeta are in the room. Dadi notices the pain in her foot had vanished and gives the credit to her medicine. She tells Preeta she won’t do any exercise anymore. Preeta insists she must continue with the little exercise and she also tells Dadi that her family loves her and wish everyone continue to love her.

Dadi blesses Preeta to get someone as much loving to her as well. Rashi comes to take Preeta downstairs. Dadi realizes she likes Preeta. Downstairs, Kareena had sent Shrishti with flowers upstairs. Preeta couldn’t see her there.

While Kareena gives Rashi the choice to select flowers, Rashi asks Preeta. Preeta selects Genda against any other flower, against Kareena’s wish. Rashi and Preeta leaves whiles Kareena get annoyed over Preeta’s choice of flowers.

Preeta assures Rashi she would take care of the floral arrangements. Shrishti comes downstairs with the vase and Kareena asks Shrishti if she likes the flowers? She tells Shrishti a girl has an eye over the money of their house and she is either seen with the elder son of their house or the younger one.

Kareena asks Srishti to go forward and push the girl who is decorating their house off the latter, and she would pay her double the amount of her salary. Srishti starts walking towards the girl upon hearing about the money and is shocked to see that it is her sister Preeta behind the flowers.

She slows down, but yet thinks of the money that she would get on doing that. As she walks towards Preeta, she sees Rishabh standing next to her. Srishti hides herself behind the door and pushes the ladder. Preeta falls into Rishabh’s arms.

The two shares a romantic moment and Rishabh’s mother sees them. Preeta thanks Rishabh for saving her. Rishab watches Preeta and leaves to receive a phonecall. Rashi takes Preeta aside to talk to her.
Rakhi walks towards to Preeta and asks her to come to her room.

She starts showing her all her jewellery and asks Preeta to convince Rishabh for marriage. Initially, Preeta thinks that Rahki is asking her to get married to Rishabh, but later understands that Rakhi wants her to just talk to Rishabh and convince him to choose any girl his mother wants him to get married to.
****

At home, Sarla watches an old album of the
girls and cries. Beeji comes to console Sarla. Beeji tells Sarla that her daughter’s aren’t alone and they are each other’s strength. She adds that they will fight any problem faced by them both. Meanwhile, Kareena is seen fuming with anger in her room talking to herself.

She thinks that this is the first time ever that her plan hasn’t worked out the way she has wanted and that she would have to get Preeta out of their house. Srishti listen to her and tells her that her luck is not on her side.

Srishti asks her for her payment, but Kareena refuses to give her anything as she says that Preeta didn’t fall on the ground, but in Rishabh’s arms which wasn’t the plan. Then Srishti says that if she doesn’t pay her then and there, she would go around telling everyone that Kareena had asked her to push Preeta off the latter.

Kareena is shocked to hear this and asks her to at least work for a week and then only will she get the money. Kareena sends Shrishti away and furiously tells herself that she hates Preeta.

Rashi shows Preeta some jewelry. Preeta tells her that she hasn’t seen such beautiful jewelry in her life. Rashi shows her some more and says only Preeta must like them. Preeta compliments each of them and asks if they are for some special ceremony.

Rashi says those are for her daughter in law. Preeta gets confusion and asks her to be clear. Rashi says Rishab likes her and asks Preeta if she likes Rishab too?

On the engagement day, Shrishti is looking after all the arrangements and asks a staff to paint a corner. Sameer Luthra who was passing by, fell off and the paint spills over Sameer. He recognizes Shrishti but she was apologetic.

His eyes burn at once, and asks to take him to the washroom. Shrishta recognizes him when he finish washing his face, she takes all his words back and blames him as it because of him she has to work there.

On the other hand, Rashi tells Preeta she can only help her, she tells Preeta that Rishab trusts him and appreciated her truth and honesty. She is only asking a favor from her, She asks Preeta to convince him to get married and get a life for himself as he can’t finalize any girl.

Preeta now understands Rakhi only wanted her help to convince Rishab get married. Preeta promises that as a well-wisher she would surely speak to Rishab to get married. Rashi suggests to Preeta why not invite the girl’s family tomorrow at the engagement. Preeta assures she would speak to Rishab. Rashi cheerfully hugs her.
***

Kareena stops Preeta and tells her not to wander around Rishab and Karan as she won’t be accepted in their family. Preeta clarifies she respects Rishab. She tells Kareena she has to speak to Rishab in a day or two as she promised Rashi to convince him get married.

She stops Kareena saying further that for rich people their money is respect but for poor it’s their self-respect. Preeta adds that for her, her father brought her up as she is the most important thing and no money matters in front of it.

Meanwhile, Rishab is scolding a manager for not being able to arrange a hall for his conference. Preeta rememberes about Sarla telling them about Kumkum Bhagya Wedding Hall, she tells Rishab about it and gives the manager a card, forbidding to give her the reference. Rishab thanks her. Preeta goes to Dadi’s room whiles Kareena eyes her angrily.

Once there was a king update Wednesday 26 January 2022

Once there was a king update Tuesday 25 January 2022