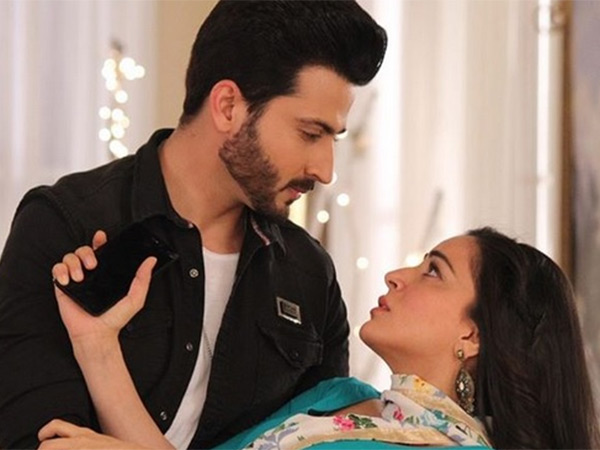 Preita and Shistri cry as Sarla tells them that she is an unlucky mother who lost her daughters. Preeta cries thinking her father already told her the names of her mother and sister. She thinks Abhi must have met Papa with Pragya. She thinks even Sarla knew they were her daughters, then why did she hid the truth from them.Sarla turns to see Preeta crying.

The inspector says their faces don’t show that they know she is their mother. Sarla explains she parted ways with her husband, he took the girls away. She never saw them after that, she wasn’t expecting to meet them; but they came to her house as tenants.

The inspector tells Sarla he can’t leave this girl, she has to be presented in court. Sarla gets enraged and tells the inspector she will take her daughter back home. Sarla goes outside with her cell phone.

Preita cries wondering how she would help her. Shistri questions where was she when they were bullied and injured in their childhood, she won’t take her help now. Preita cries, then thinks about Rishab. She thinks Rishab thanked her for her patience. Preita told Rishab she is from a small city, they have more patience. He had offered her any help anytime.

Preita dials Karan’s number. He had been working out with two girls, and comes aside. She asks Karan to give the phone to Rishab please. Karan wasn’t ready and asks why she is so nervous. Preita says she is in trouble, she is in police station. Karan says she deserves it, he is relieved that today she is in trouble. Karan says he wants her frustration to increase so he would send her the number.

Sarla calls Pragya. It was Tanu who answered the call. She tells Sarla Pragya is busy and won’t speak to her. Sarla requests her to give the phone to Pragya. Tanu cuts the call. Sarla was determined to get her daughter freed at any cost. She comes inside, Preita stops by Sarla.

Sarla holds her hand and wipes Preita’s tears off her face and explains she never wanted them to get away from her. Rishab arrives and says she informed his lawyer, he would be here anytime.

Rishab comes to inspector and asks him on which basis they arrested Shistri, what did she steal. The inspector was unable to answer. Rishab asks if they checked the CCTV footage, and which constable arrested her? A man constable agrees he did. Rishab asks how he went to arrest a girl without a lady constable.

Rishab warns the inspector he would create a case against the inspector for arresting a girl without details and lady constable. The lawyer comes there and warns inspector Chauhan he is already black listed. The inspector orders to free Shistri. Sarla and Preita were thankful to Rishab. She introduces herself as mother of Preita and Shistri.

At home, Preita finds Shistri packing their luggage. She was worried and asks Shistri where she would go. Shistri cries hard hugging Preita. Preita requests her not to cry. Shistri says she dislikes this lady, she has always hated her; she feels disgusted to be her daughter and can’t stay for another second here.

She didn’t even give a motherly expression since she knew they are her daughters. She rejected them years ago. Shistri turns to leave, Preita doesn’t move. Shistri asks if she should leave alone.

Shrishti asks Preeta should she go alone? Preeta decides to go with her as nothing matters more to her than Shrishti. While they are leaving, Sarla stops them. Shrishti says away from her and her house.

Sarla says they can’t go. Dadi asks Sarla to calm down. Preeta requests Shrishti to stop. Shrishti asks her why she’s coming into Sarla’s talks again. She then asks Sarla by what right she’s stopping them. She doesn’t take her as her mother. Sarla says not as a mother, in police station they have given this address. What if police come searching for her here? Once that matter ends, they can leave.

Shrishti says they will give new address to police, she doesn’t need to worry about that. Sarla gets worried and wonders now what excuse she should use to stop them.
She then tells them she wants her rent money before they leave.

Both sisters are shocked. Preeta can’t believe and she says she will get her money. Their dad may have made many mistakes, but he never ran away from his responsibilities. It was Sarla who ran away. She stops referring Sarla as Maa and now refers her as Ms. Sarla ji. Both sisters go back inside. Sarla cries.

Why she didn’t hug them as a mother. Shrishti further says she wanted her mother to scold her, pamper her, but this woman doesn’t care. She just wants money. She questions what Pragya has that she doesn’t have. Why doesn’t she love her too? Preeta tells her because she has her.

She has always taken care of her like a mother. She will do double job and get her out of here. She will fulfill all her wishes. It’s just about 2-3 weeks. Till then, Preeta says, Preeta mum wants smile on Shrishti’s face. Preeta now goes on a side and cry. Shrishti hugs her and both cry.

Rishab’s mum is looking at girls photos for him. Kareena tells Sarita to show middle class girls to some other family. Vendy comes with list of engagement venues.

Kareena doesn’t like any of those and she tells her that she wants a grand venue. She tells her to do her work fast else she will spoil her image in market. Vendy leaves. Rishab comes in. His mum tells Sameer to show pictures to him.

Rishab comes to his room and says he hasn’t seen a girl like her. Sameer comes in and asks who she is? He shows a picture and asks that one, right? Rishab says she is someone else, very different.

In flashback, Rishab drops Sarla, Preeta and Shrishti. Shrishti and Sarla go in. Preeta thanks Rishab saying she didn’t know whom to call, what to do. And then she thought about him and she thought she can trust him.

Rishab tells her that she is not only physio of his Dadi, but also a well-wisher. It’s hard to find such people. He will be happy if she takes him as a friend as well and not employer only. She thanks him and leaves. Her dupatta flies and covers his face. She pulls it back and leaves.

Back to present, Sameer asks him where he is lost? Should he tell his mum that Rishab has liked someone. Rishab asks him to leave and suddenly gets mad at him saying he’s not his real brother and not to disturb him. He just works for him. Sameer says sorry to him and asks him to check presentation that he has emailed him.

Rishab now apologises to him saying he was in thoughts and he interrupted and showed those photos.. which he doesn’t like. Rishab thinks Preeta is so good.. cares so much about her family, her patients. He has never seen a girl like her.

Preeta wonders whether her decision of coming to Mumbai was right or no. She wanted to meet her mother, but that also gave them pain only. People say that your dreams come true by coming to Mumbai, but here Shrishti changed her dreams only.

Flashback: Shrishti tells Preeta that she no longer wants to become an actress or model. She just wants to earn money now and she will do any job. She wants to give money to Sarla as soon as possible and leave.

Preeta says she told her she will do job and pay. Shrishti says now they will do everything together. She further says she doesn’t understand how double standard people can be. In police station, Sarla was like my daughters and at home, give me money. They will throw money at her face and leave.

Back to present, Preeta asks why God is doing this with them.

Karan’s car breaks down. He doesn’t have his driver. While going to mechanic, it starts raining. Preeta is also there. Her umbrella flies away. Karan picks it up and walks away with it. Preeta runs behind him saying thief.. give me my umbrella back.

Both are shocked seeing each other. They fight for umbrella. Karan says umbrella is his.. God sent it to him to help him. Preeta says it’s hers. He asks for proof. They continue fighting. Preeta then requests him to give it to her else she will get wet and get sick.

He asks her to stop with her drama. She says fine she will drop him till his car and then she will keep umbrella as she needs to go in bus and she will need it more. He says his car broke down as soon as he entered her third class society.

He asks her to go to mechanic with him. She has no choice but agree. Both walk together holding umbrella. He notices his hand on hers and takes his hand back. He asks her how police let her go. She says because he came running running and thanks him. He says what rubbish.

She trapped him in police matter and she wanted him to save her? She says she knew it. That is why she didn’t call him. He says she’s forgetting.. it was Luthra only who saved her. She says that Luthra was very understanding, caring that Karan can never become. She loses her balance. Karan catches her. Both have eye lock and recall their past meetings.

Once there was a king update Wednesday 26 January 2022

Once there was a king update Tuesday 25 January 2022