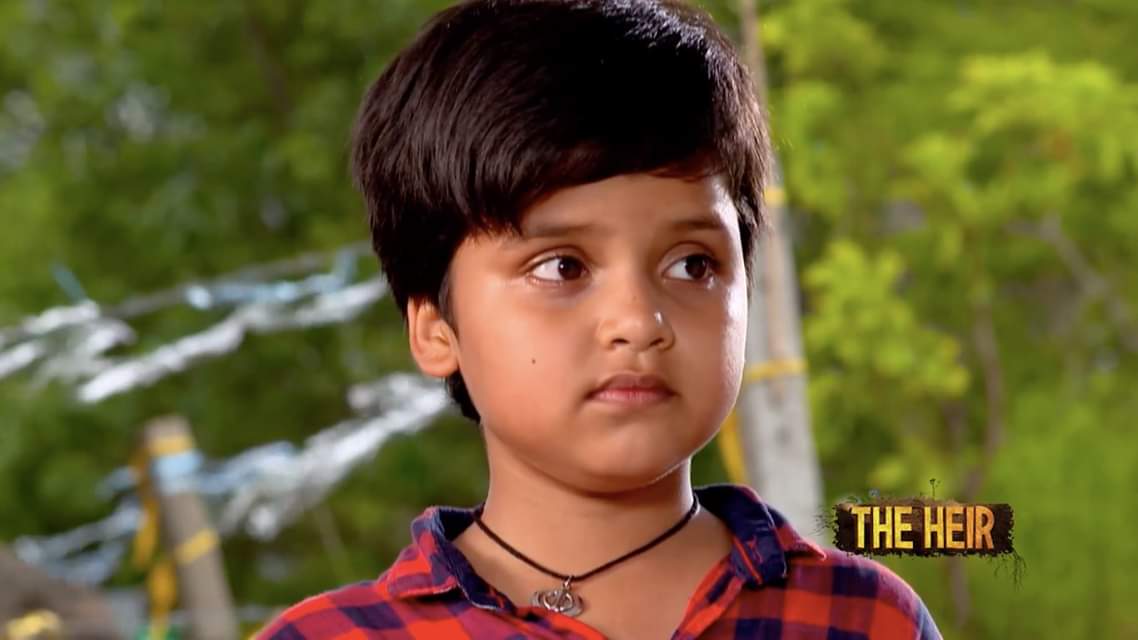 Rohan goes to Harjeet ( his father) and says change Raj’s name to Radha, he is at home and doing woman’s work all day, you know what happened today, mummy was teaching him how to stitch clothes, Rohan says Raj is afraid to go to school. Amrit gets tensed. Rohan goes. Harjeet asks Amrit to come to him. He asks what was Raj doing, you are teaching him tailoring work, Rohan is right, Raj will go to school from tomorrow.

Prev: Tuesday update on the heir

She says but his legs. He holds her face and says if I see Raj at home, I will make him wear girls’ clothes. Amrit cries. Raj looks on. Amba cooks food while thinking. She thinks of cooking a sweet dish one more time, and she keeps the cooker on the stove. She gets away and the cooker explodes. Veeru, Mannu and everyone come there and worry for Amba.

Deena asks Amba if anything happened to her, who would raise her daughters. Veeru says maybe Amba was thinking since Mannu refused to go to school. Raavi asks what, Sukhi never got tired of going to school, I mean if Mannu does not go school, how will he become the head.

Amba asks Mannu if he lose, will he not go to school, I felt you will study well, I thought wrong that time, I thought to keep you always with me, there will be many problems, if you run away, you know everyone will call you a coward, you have to become like your father, who always won, you have to go to school. Mannu says I will go to school and become like father, I will win and show my success.

Amba hugs him and asks him to sleep. Raavi evilly smiles seeing them and says Amba made her work easy as no one can save Mannu this time. Mannu tell Veeru that he did his homework, but he asks whats the need. Veeru says its given so that kids study at home as well and remember things well. A car passes by and dirty water falls on Mannu. Mannu gets angry. Veeru takes him to the car. Mannu sees Raj in the car and recalls his words. He says that boy did this intentionally. Veeru says what we see that is true is not always right, leave it come.

The kids laugh. Raavi says today Mannu will die. Jagan gets his gun and says I will kill Mannu today. They get shocked seeing Amba at the door. Raavi tries to explain. Amba did not hear them and ask Raavi to come fast and have food. Raavi says I will come. Amba leaves. Raavi gets relieved, and says I got scared, we got saved. The teacher takes the attendance list. More girls join the class. The boys get happy. The teacher asks them to open some chapter. He explains history. Raman looks at Simran.

Amrit cuts her finger while chopping vegetables. Swaroop cares for her and asks what was she thinking. Amrit says I am worried for Raj, don’t know how is his day. Swaroop asks her not to worry. Amrit says Rohan does not let Raj live, Raj has many marks on his heart. Swaroop recalls Jagan and holds her face, and says when there are some marks, the hearts get strong, Raj will learn a lot, don’t cry, Im saying the truth, who else can know better about the marks, Swaroop says I will go out, I have work.

The kids leave as the school bell rings. They ask Raj to come and play. Mannu says leave him, he does not move from his place. The kids laugh and go. Mannu leaves. Raj gets sad. The peon asks him to go out and play. Raj walks by the support sticks. Mannu sees him. Amba is on the way and see a woman committing suicide. She saves the lady and asks are you mad to die. The lady says you are Jagan’s sister in-law, he wants to snatch a widow’s land, go and stop him if you can.

She cries and asks what shall I do, I have one support to live. The kids come back to the class after lunch break ends. Mannu asks Raj will he become his friend. Raj asks did you get pity for me. Mannu says no, Sir told me to learn from you. Raj agrees. Sukhi asks Mannu to sit with him. Mannu says I will teach you what I learn from him, it will be good for both of us. Sukhi likes the idea.

The teacher comes and asks them to answer the questions. Mannu asks Raj to help and teach him. Raj teaches Mannu about subtraction. Mannu smiles and says this is a great way. Sukhi sits alone. After school ends, Veeru asks Mannu why is he happy. Mannu says I got a new guy, he helped me in maths, I thought he is bad. Veeru says you should thank him.

Mannu says yes, come. He goes to Raj’s car and does not find him. he leaves a thank you note for Raj. Raj comes and asks what are you doing. Mannu says I was pasting a note for you to thank you. Raj misunderstands him and says you were applying glue on the stick to trouble me, go from here, else I will beat you a lot. Veeru looks on.

Raj misunderstands Mannu. Rohan tells Raj that Mannu is a Pavaniya, if he troubles you, tell me, I will break his legs. They leave in the car. Amba asks Jagan not to take that widow’s land, she is alone and she manages her life by that land. Jagan says I’m giving it a price. Amba asks him to think, one payment can’t make her live all her life. He shouts asking her to see. Mannu comes home and gets shocked. Jagan asks Mannu to go to his room, and asks her why is she taking the side of that widow, shall I not think of my harvest, we would get profit.

Deena asks Amba not to interfere in this matter, but she should rather look after Mannu and Jagan will manage the work. Amba asks Mannu if Veeru did not come home with him. Mannu says Veeru stopped at a shop. At night, Mannu sees Amba sad. She recalls that widow’s words. Mannu asks did you accept defeat. Amba says Deena was right, I should not interfere in this matter.

Mannu says it means you lost, you want to become like father or not, many tough things come in life, if you run away, people will call you coward. Amba recalls she has told this to Mannu. She says no, I want to become like Mannu’s father. She hugs him and smiles. Its morning, Raj does not help Mannu in school. Mannu asks for help. Raj calls him a thief. Mannu says fine, leave it. Amba tells the widow to use the field and plant potatoes.

She puts the potato seeds and helps the widow. Jagan and Raavi see her. Jagan says foolish woman, she is doing man’s work, I told her not to interfere in this matter. Raavi says kill her son and she will die, else she will cut all your words. Jagan says just some time more, then Mannu will die.

The peon sees Veeru and asks him to help. Veeru says my nephew will come, he will worry if he does not see me. The Peon says its a matter of five mins, come and help. Veeru goes with him. The Peon signs at Jagan. Jagan smiles. The Peon rings the bell. Mannu looks for Veeru, while the peon lies to Veeru and Mannu. The Peon asks Mannu to come as Veeru is calling him at the other gate.

Mannu goes. Jagan signs the peon. Mannu says Veeru is not here, and sees the peon gone. Jagan asks the goons to go and catch Mannu. Mannu recalls Amba’s words and runs back inside the school. The goons run to catch Mannu. Veeru looks for Mannu and misses to see him. Mannu calls out for Veeru. Veeru asks him to wait. The Goons sees Veeru and goes. Veeru goes and hugs Mannu. He asks Mannu not to go anywhere without telling him. Mannu tells his uncle that the peon took him there saying Veeru called him.

Veeru asks who was that peon, show me. Jagan gets angry seeing them. Its night, Jagan tells Raavi that Veeru has saved Mannu. Mannu comes to hide in their room and asks Jagan not to tell Sukhi. Jagan fumes seeing him and recalls how many times he failed. He hurts his hand holding a knife and says I will kill him today. Raavi says no, and cares for him. Mannu asks how did your hand bleed, shall I get medicine for you, don’t worry. Sukhi catches Mannu and says now its my turn to hide.

Mannu asks Jagan if he is hurt. Raavi says its fine, go and play. Mannu goes. Raavi calls Sukhi. Mannu does counting and looks for Sukhi. He finds Sukhi and says now its my turn. Sukhi says I m going out, will you come. Mannu asks why, its night, we will play at home. Sukhi asks him to come.

Mannu asks Amba can I go. Amba says no, Veeru is not here. Sukhi says your mother is not here, you take Veeru to school, Mannu sits there, everyone laughs at him, Sukhi says I will win the race. Mannu asks which race. Raavi smiles. Sukhi says there is a school race, I have to win and make the Pavaniya’s name shine, you wait here and wait for Veeru. He laughs and goes. Raavi says now Mannu will make Veeru leave him, and then Jagan’s way will get cleared. Mannu thinks of how to convince his mummy not to send his uncle with him to school.

This is fate update Thursday 23 September 2021