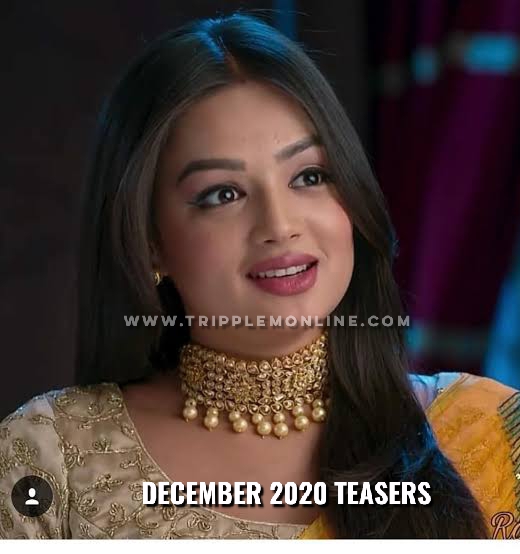 Mehek December teasers 2020: The Khannas are in a state of shock as the truth is revealed about Anjali. Sanjana is one step ahead of the Gabelas

Khanna does right by his word and secures an investor for the Gabela online business. Neeve is traumatised after being held captive. Shaurya and Mehek save the day just in the nick of time.

Norah is feeling insecure now that Karan is spending a lot of time with Sanjana. After a close call to death, the Sharmas and the Khannas made it out unscathed. Balwant is still affected by PD’s passing.

Sanjana has turned the tables on Karan and things are not looking good for Karan’s efforts. Aunt Dolly is suspicious about Anjali and her intentions. The Khannas are in a state of shock as the truth is revealed about Anjali.

Seema comforts Karan and assures him that what he is doing will soon be fruitful. Shaurya stands up to Hareesh. Anjali blames herself for the strife between Hareesh and Karuna.

Karan finally gets the confession out of Sanjana and things might be turning right for him and Norah. Anjali’s intentions are not what they seem to be. Karuna’s overprotective nature over Anjali has blinded her judgement.

Eddie is working towards relaunching the online business to keep Leleti’s legacy alive. Anjali’s antics cause a serious rift between Mehek and Karuna. The Sharma’s have a big move in store for them.

Karan is adamant that he has gained enough trust from Sanjana, but it seems Sanjana wants him to do more to prove his loyalty towards her. Karuna treats Mehek like an outcast because of Anjali. Mehek goes out of her way to help Anjali.

Priya’s troubled past doesn’t seem to be going away with her former husband still troubling her. Anjali works her way through the Khanna family. Karuna’s love for Anjali threatens the rest of her relationships.

Karan and Norah put on a show for Sanjana to persuade her that they despise each other. Bonds are broken as Karuna excommunicates those who love her the most. Dolly sees right through Anjali and her antics.

Sanjana shares a deep secret with Karan. Could this be the evidence Karan has been looking for all this time? Shunned like outcasts, Shaurya and Mehek leave the Khanna household. While Anjali has Karuna wrapped around her finger.

Priya tries to save her relationship with Dennis. Mehek has seen right through Anjali and her plan. Will she be able to show Shaurya and Karuna the truth?

It seems Sanjana is a step ahead of Karan and the Gabelas.

Karan has Sanjana against the wall and on the verge of being arrested. Anjali strikes back hard and this time it is Meheks life that is at risk. Will Shaurya be able to save her in time?

Karan is disappointed to lose evidence that could see Sanjana behind bars for good. Anjali’s actions towards the family will have dire consequences. Shaurya and Mehek have good news to share.

Sanjana is off the hook yet once again but whose fault is it? Anjali’s cunning ways place Shaurya and Mehek’s unborn baby in danger. The Khannas have to fight with a united front.

Sanjana proves to be way smarter especially after she has been arrested. Mehek and Dolly have become Anjali’s servants. Aunt Kanta is concerned about Mehek and the rest of the family.

Eight years later Dennis and Priya are happily married with a Norah and Eddie back in Africa. Mehek and Shaurya have reunited with the rest of the family. Vicky and Nehal welcome their bundles of joy.

Sanjana gives Karan an ultimatum regarding their relationship. Even behind bars Anjali plots for Mehek and Shaurya’s ruin. Swetlana is back in the picture.

Karan’s efforts to protect the Gabela family fall flat. Swetlana is back for revenge and she is not alone. The Khanna’s and Sharma’s lives are in grave danger.

Karan and Norah decide they also want to get married and decide on their wedding date. The whole family is taken aback as they realise that Swetlana is not in jail. The Khanna family has been backed into a corner.

Karan and Norah’s happiness is short lived due to devastating actions from Sanjana. Does good triumph over evil as Kanta is left as the lone survivor. Swetlana has executed her plans successfully.

Its been nine months since Dennis and Priya got married and they have a new addition to the family. Vickram plans to kill his newborn baby girl as he believes she is a burden, he leaves her in the rain, while another father Jugraj is celebrating the birth of his son.

Nandi is hurt and it causes a rift in the family. Mehek is being bullied by the boys in her area, while Shaurya is suffering from being bullied by his father to get into boxing. His passion is cooking.

Nandi is hurt and it causes a rift in the family. Mehek cuts her hair in order to enter the boxing competition, but her father has other plans for her, Men have come over to negotiate her dowry.

12 Years later Nandi is now twenty years old and is testing her mother’s patience. Mehek and her family leave home and run away from her father. Coach finds them a home that feels familiar and they all stay together as a family.

Priya and Nandi are at each other’s throats again over Nandi’s attitude. Mehek cannot control her anger, she finds herself in a fight at school with Shaurya and his friends. Kanta is homeless and see’s Mehek in the crowd.