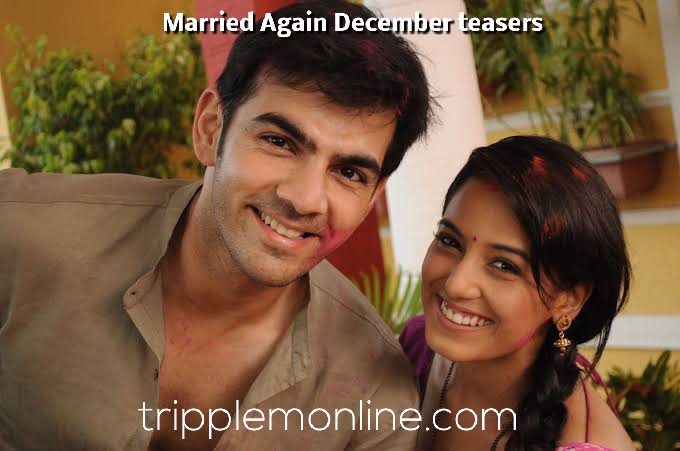 There’s a prophecy of death on Sarita’s life and Raj is scared. Later the family get Sarita married off to Rohan and the couple sign the divorce papers in tears. Is this their end?

Sunday 1 December 2019
There is a party for Divya and everyone is excited except Sarita, it seems as though Divya was lying to her about bringing them closer. After 10 years, Sarita and Raj sleep in the same bed for the first time, Divya’s promise is slowing starting to show and Sarita is very happy.

Monday 2 December 2019
Sarita decides to cut her palm to prove that she loves Raj and wants to make it work, but Divya arrives  and watches Raj take care of Sarita’s arm.

Tuesday 3 December 2019
Raj confesses to Divya about his dreams for Sarita. He realises that no matter what happens he will always love Divya and wishes Sarita could also find a man who loves her. Sarita overhears the conversation and feels guilty of trying so hard to make him love her.

Wednesday 4 December 2019
Munni hears Sarita ask Raj to find her a loving man and she goes and tells the whole family.

Thursday 5 December 2019
Raj seems to have second thoughts about breaking up with Sarita and find her a husband.

Friday 6 December 2019
Kamla is putting pressure on Raj to give him grandchildren.

Saturday 7 December 2019
Rahan has eyes for Sheela and decides that it is her he wants to marry. Instead of Sarita being humiliated she is happy with Raj’s reaction about the situation.

Sunday 8 December 2019
Sundari has to be sent away for Rohan and Sheela to get married in peace.

Tuesday 10 December 2019
Sarita is suspicious about Rohan and the helpers relationship. She questions Rohan but he manages to convince her otherwise.

Wednesday 11 December 2019
Sheela and Rohan are arrested but Raj manages to get them out. Sarita is worried about Sheela marrying into this family.

Thursday 12 December 2019
Sarita is on a date with Rajeev, the date fails but Raj is there to comfort her. During the engagement ceremony between Sheela and Rohan Rohan gets a call that puts the ceremony on hold.

Friday 13 December 2019
Rohans lies to Sheela about Sarita, Sarita tells the whole family about Rohan and the woman they call their helper but Sheela does not believe her and she is kicked out of the house.

Saturday 14 December 2019
Sheela slaps Sarita in front of everyone at her wedding. She hates her for ruining her Hanna ceremony.

Sunday 15 December 2019
Sarita gathers enough information that Rohan is already married and finds out the truth why they trying to marry him to Sheela. Will she stop the wedding on time?

Monday 16 December 2019
Sohanlal is impressed with Sarita’s effort in saving the family, Kamla is ready to accept her as her daughter in law.

Tuesday 17 December 2019
Sarita and Raj have entered a couples competition and this strengthens their love as they realise how well they know each other.

Wednesday 18 December 2019
Raj and Sarita win Mr and Mrs Bopha, and both go on a date to celebrate.

Friday 20 December 2019
Episode 30
Raj makes a deal with Vikrant which  will put Sarita through some tests.

Sunday 22 December 2019
Episode 32
Vikrant is a drunkard and Sarita suspects that he is the man Raj wants her to marry.

Monday 23 December 2019
Sarita must choose between a young boy and the love of her life.

Tuesday 24 December 2019
Raj is consoling himself about his feelings for Sarita by helping her chose a ring for Vikrant.

Wednesday 25 December 2019
Sheela goes looking for the man who looks exactly like Rohan by the name Guru.

Thursday 26 December 2019
It seems like Sarita is moving from one evil mother-in-law to another. The whole family meets her, and everyone is afraid of Sarita.

Friday 27 December 2019
Drunk Raj confesses his love for Sarita but she has already made up her mind. Vikrant continues to spoil his wife to be with expensive jewellery.

Saturday 28 December 2019
Guru and Sheela meet up and decide that they want to get married, he is afraid of the rejection he might get from her family because of his background.

Sunday 29 December 2019
Sheela goes against her family and runs away with Guru.

Monday 30 December 2019
A call comes through for Guru and Sheela answers, only to find out something that leads her to be put in a lot of danger.

Tuesday 31 December 2019
Raj goes to Vikrant’s mansion intoxicated and confronts him about taking the one woman he loves.