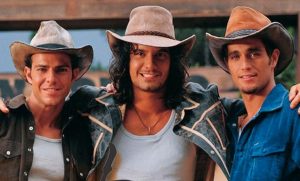 Hidden Passion November teasers 2022: Romina attempts to shoot Jimena. When an interruption upsets her plans, she manages to get away and makes hasty efforts to arrange an alibi.

Juan’s reaction is explosive when he sees his wife with his rival again. Enraged, he looks for his gun – but then makes a shocking discovery.

Ashamed of his mistakes, Juan thinks Norma will never forgive him. A scared Óscar, meanwhile, demands that Romina move to another house in San Marcos.

In conflict with her own daughter, Rosario warns the Elizondo Reyes of the danger Juan David risks when Muriel’s father learns of their relationship.

Romina drugs Jimena and subjects her to a terrible ordeal, then escapes when Óscar arrives. Afterwards, Jimena thinks it was all just a nightmare.

Rosario is enraged when Muriel refuses to separate from Juan David. Aída tells Óscar that she will help him get Romina off her property – if he pays.

Norma goes to the mill house, unaware that she is being followed by Adán. She finds Duván there, alone. Later, Sara receives Muriel at the hacienda.

Romina puts a poisonous spider on Jimena and Óscar’s bed, but her plan goes wrong when she accidentally locks herself in a cupboard while hiding.

When Norma questions Óscar about his relationship with the woman from the mill house, he becomes upset. Meanwhile, Romina tries to get rid of Berta.

Juan warns Óscar about the risk he faces with Romina. Óscar overhears a phone conversation between Aida and her son, speaking of someone named Adela.

Óscar gets a clue that could help put an end to the blackmail when he discovers that Aida’s nephew is the man who is with Adela Carreño.

Romina attempts to shoot Jimena. When an interruption upsets her plans, she manages to get away and makes hasty efforts to arrange an alibi.

Juan confronts his brother, demanding that they press charges. Norma is certain that it was Romina who shot her mother.

Accusations of cowardice see Óscar and Juan get into a fight. Later, Romina responds with violence when Óscar spurns her advances.

Jimena is confused by her husband’s attitude. The family gathers to listen to Óscar, who admits his mistake and asks for help in catching Romina.

Facing the Elizondo Reyes and the authorities, Romina defends herself haughtily, denying all the accusations and delivering a shocking revelation.

Norma advises her sister to forgive her husband, but Jimena wants to know how far Romina was able to go, and the extent to which Óscar is to blame.

Sara suffers an accident at her mother’s house, and Demetrio rushes to her aid. Juan has cause to suspect that his brother fell in love with Romina.

Norma is still being stalked by Adán. Overhearing when she talks to Jimena about the danger Romina represents, he approaches Norma with a proposition.

As Norma struggles against Adán’s advances, Juan hears her cries for help. Arriving in time to rescue her, he vents his fury on her assailant.

Jimena visits Romina in jail and tries to make a deal with her, but suffers a breakdown when Romina finds a way to take advantage of the situation.

Rosario and Muriel’s show attracts a crowd of locals, with Samuel Caballero among the attendees. Juan and Norma change their plans and dine alone.

Franco Reyes gets into a confrontation. Sara cannot understand the Reyes brothers’ obsession with secrecy. Óscar receives news about Duván.

Jimena finds some documents in Franco’s study and shows them to Óscar. The Elizondo Reyes are shocked to learn that Romina will be freed.

Óscar demands that Romina sign a document that prohibits her from approaching his property. Andrés and Albin warn Sara not to trust Demetrio.

The lawyers tell the brothers that Franco’s papers can be used in his defence. Things end badly when Gabriela plans a thank-you dinner for Demetrio.

Juan is tormented by a nightmare in which his brother is tortured in prison. Nino, meanwhile, has received a death threat from Demetrio’s gang.

Gaby receives a call from Nino, who reiterates his love for her. Óscar and his nephews arm themselves and prepare to confront the criminal gang.

Rosario calls Juan David and tells him that she is worried about Muriel’s safety. Rosario gets a shock. Romina makes an attempt to kill Jimena.

Samuel Caballero demands that Rosario fulfil her marital obligations and leave town with him, but Rosario is determined to remain in San Marcos.

Rosario stirs up jealous feelings in Samuel. When he orders his men to abduct her, Muriel intervenes. Óscar asks Juan David to keep a secret.