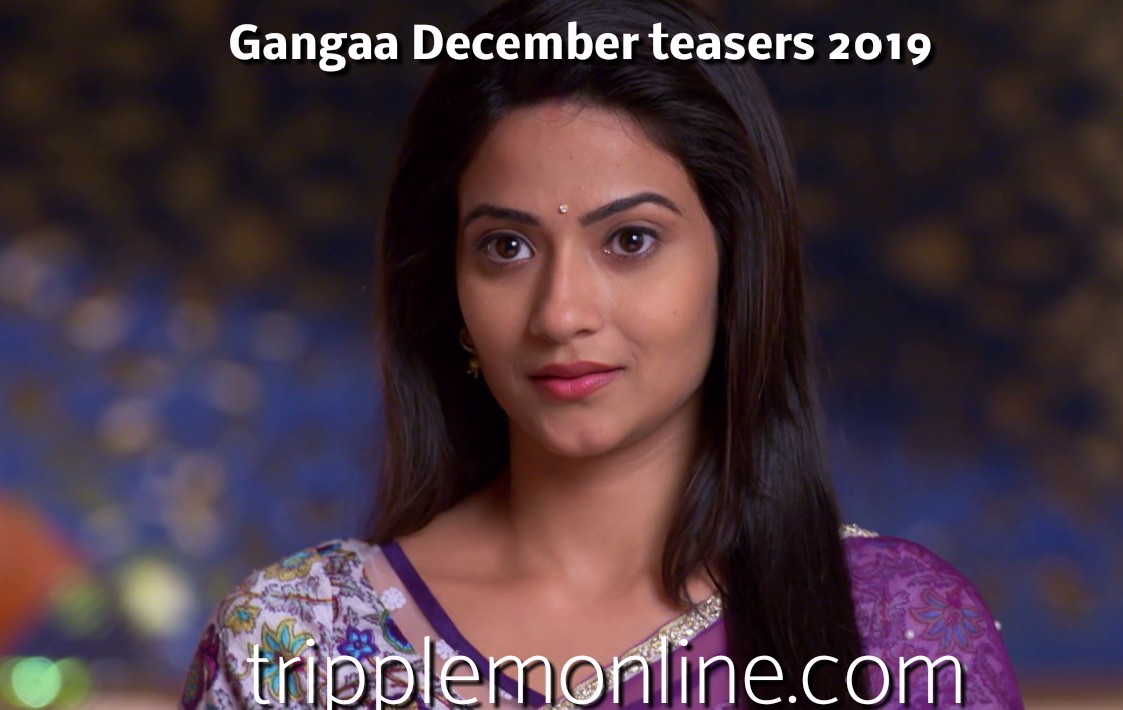 Krishna continues to find answers about her real father as more trouble rock the chateurvedi house. Will Gangaa and Sagar ever move past old betrayal and pain? December teasers on Gangaa season 2.

Sunday 1 December 2019
Krishan prays that the note  Sagar gave her will lead her to him again, and her answer to her prayer is multiplied as Sagar, Krishan and Sagar finally see each other.
Monday 2 December 2019
Sagar has asked his grandmother to make a very difficult choice regarding the family. The reunion between him and Gangaa has made matters worse and they both came to a final conclusion that leaves Krishna asking herself questions.

Tuesday 3 December 2019
Could Gangaa be using Krishna to see Sagar one last time before he and his family jet off to London. To Zoya’s surprise, Sona messes up her plans revealing a video that will shock Supriya.

Wednesday 4 December 2019
The video destroys Supriya, leading her to want a divorce, but still does not make things easier for Kishash and Pulkit.

Thursday 5 December 2019
Sagar comes up with a solution to help Pulkit’s marriage, while Gangaa is having a hard time telling Krishna who her father is.

Friday 6 December 2019
Krishna runs away from home in search of her father, but more trouble seems to follow her on this journey.

Gangaa panics and Sagar hears words from Gangaa that can change his life and be all the answers to Krishan’s questions about who her father is.

Sunday 8 December 2019
Sagar accepts and concludes Krishna is his and Gangaa’s daughter but Gangaa refuses him and his family the opportunity to raise Gangaa with her.

Monday 9 December 2019
Sagar and Gangaa finally hear why Sagar can’t remember their special night. He thinks this is his way of finally being forgiven by Gangaa and they can be a happy family, but Gangaa’s stubbornness gets the beter of her.

Tuesday 10 December 2019
Zoya will not rest until she inherits the mansion and all the money to herself. Her new plan is coming together and it will leave Sagar in a lot of pain.

Wednesday 11 December 2019
Just as Krishna was about to resolve all the problems between her mom and Sagar, Zoya’s plan convincing Gangaa to sell the house works.

Thursday 12 December 2019
Krishna finds herself torn between the only two people she loves, her mother and her father. The court case is going exactly how Sagar hoped it would but instead of him being happy, he finds himself more broken as it makes the distance between him Gangaa worse.

Friday 13 December 2019
Zoya’s hatred for Sagar is growing and she comes between Madhvi and Gangaa when she replaces Madhvi’s gift for Gangaa with a torn picture of Gangaa and her daughter.

Saturday 14 December 2019
The breaking of the fast brings Sagar and Gangaa closer. Krishna feels like she is finally going to have her parents under one roof and she can’t contain her excitement.  Pulkit proves to Supriya that nothing can change his love for Kishash when he feeds Kishash water before he feeds Supriya.

Sunday 15 December 2019
It’s Diwali and everyone is with their families, including Sagar, Krishna and Gangaa. It seems to be the beginning of a great life together as Krishna keeps bringing her parents closer. But fire interrupts the peace, and everything comes crumbling down.

Monday 16 December 2019
Zoya’s second attempt to kill Krishna fails but plan B seems to work for her whilst leaving Sagar and Krishna in a lot of pain. Zoya seems to be the voice in Gangaa’s head, feeding her lies about Sagar and his family, now the real war starts.

Tuesday 17 December 2019
Gangaa pulls the trigger and it proves to Sagar that she is serious about not wanting him back, but his love for her ignites him to keep fighting for his family.

Wednesday 18 December 2019
Gangaa is behind bars and the only voice she keeps hearing is Zoya’s, she brainwashes Gangaa with all the negative ideas. Gangaa finds a very dangerous way to run away from jail and Zoya is happy to see her plan work.

Thursday 19 December 2019
Sagar wins custody to Krishna and she finally comes home to the Chaturverdi house. But only Kanta is happy in this house.

Friday 20 December 2019
A prayer is held for Krishna and the whole family is sitting around with the priest, when an unexpected visitor knocks at the door to join the prayer. Meanwhile, Zoya is plotting another plan to kill Krishna.

Saturday 21 December 2019
Zoya takes Krishna to the roof, but Sagar and Pulkit are quick to notice that Zoya is up to no good. They follow her and are in time to save Krishna as she is pushed from the roof top.

Sunday 22 December 2019
Zoya is kicked out of the Chaturverdi house by Kanta and this time not even her dad Niranjan takes her side. Krishna is the woman of the house as she is in control of bringing her family together.

Monday 23 December 2019
Sagar and Gangaa have been challenged to complete tasks against each other that will determine whether Gangaa stays at the Chaturvedi house or goes back with Krishna. Complications arise, and Sagar gives up on fighting for love or his family.

Tuesday 24 December 2019
Gangaa is traumatized by Krishna’s speech at school about who her favorite parent in, she locks herself in her room thinking of ways to stop Krishna from loving her father. She runs away with Krishna and leaves a note for Sagar that has the whole of the Chaturvedi family panicking.

Wednesday 25 December 2019
Relief comes to Sagar when he realises that the bus that overturned on the road didn’t have Gangaa or Krishna in it. He takes them back home but decides to go back to London to save his heart from anymoe heartache caused by Gangaa.

Thursday 26 December 2019
Sagar has left, and nothing is forcing Gangaa to stay at the house until Niranjan falls ill. He is diagnosed with an incurable disease, but the Dr let’s Gangaa know hoping she will tell the whole family. Will she tell the Chaturvedi family about Niranjan’s illness?

Friday 27 December 2019
Kanta overhears Gangaa’s conversation over the phone with the Dr. His son Niranjan is sick with blood cancer and she is indenial. Kanta will do anything to save her son and goes to a prophet who Gangaa is very skeptical about.

Saturday 28 December 2019
Niranjan is in hospital and Madvhi finds out that her husband has 6 months to live. It is a hard time for the family but Kanta still has hope that the false prophet will heal Niranjan.  He is discharged and a home nurse is hired to look after him. The nurse appears with an enemy at the Charurvedi mansion.

Sunday 29 December 2019
With Madvhi and Kanta believing the false prophet, they have no idea that they let their enemies in the house, Yash and her mother Prabha.

Monday 30 December 2019
Will Gangaa agree to marry Sagar? Kanta is obsessed with the prophet ad more bad things happen in the house.

Tuesday 31 December 2019
Disha has news for Pulkit that could either break or grow his family, while Sagar and Gangaa have Krishna and Niranjan happy at their wedding

Visit our  homepage (tripplemonline.com) for daily updates of all series.