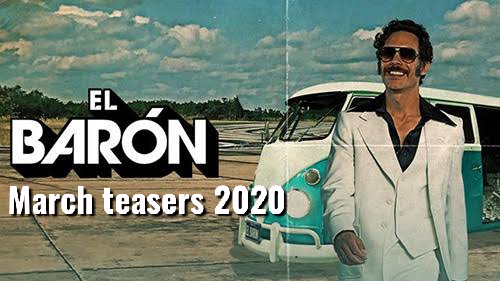 El Baron March teasers 2020: Nacho and Isabel steal an ambulance and disguise to try recover their son but things don’t quite go as plan.

Sunday 1 March 2020
Cecilia bribes a sergeant and escapes to Medellín with her mother, Amparo. Meanwhile Isabel wants to travel to New York to have her baby.

Monday 2 March 2020
Cecilia makes an anonymous call to the police, giving them information on Isabel. Nacho tells Lehder to leave Panama as soon as possible.

Tuesday 3 March 2020
Isabel and Joe go to the airport, but complications arise. Meanwhile, Nacho is frustrated at being unable to stop his wife from leaving.

Wednesday 4 March 2020
Isabel gives birth mid-flight, and the plane is forced to return to Miami. Meanwhile, Albertico is discharged from hospital and transferred to prison.

Thursday 5 March 2020
Nacho travels to the airport in search of Isabel, but once he arrives he is recognised and arrested. Meanwhile, Lehder negotiates with Thompson.

Friday 6 March 2020
Thompson is arrested after shooting the local police officers and attempting to forcibly enter the hotel where the drug lords are staying.

Saturday 7 March 2020
Escobar wants to know who betrayed them. Farley arrests Joe Fernandez and interrogates him about Isabel. Cecilia gives new clues to the authorities.

Sunday 8 March 2020
Thompson saves Nacho and Lehder’s life, but now Judy is in danger. While Chepe Santacruz is working as a dancer, a shooting breaks out.

Tuesday 10 March 2020
Montero warns Blanco of what will happen if she kills Nacho and Isabel and Escobar finds out. Escobar declares war on the Colombian government.

Wednesday 11 March 2020
Series finale!
Nacho and Isabel steal an ambulance and, in disguise, enter the hospital to try to recover their son – but things don’t quite go to plan.

Lord of the skies season 6 replaces Elbaron on telemundo after it ends.

Read more about the families in telemundo’s blood and wine series...