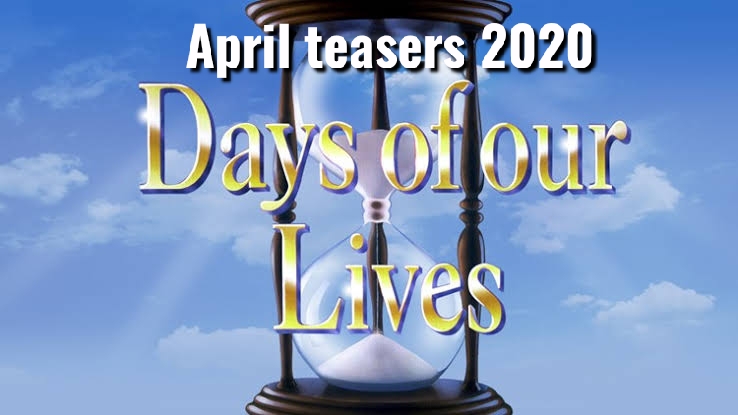 Read April 2020 teasers, updates on Days of our lives showing on e.tv. Hal puts Kayla’s life in danger. Chad makes a move to dismantle Deimos and his empire, as Sonny and Paul try to find out what they can about Deimos’s connection to the stolen antiquities.

Days of our lives April teasers 2020:

Abigail and Chad are reunited at the hospital after his kidnapping ordeal… and Chad tells Abigail the truth. Eduardo defends he did what he had to do. Ciara and Claire bicker after Ciara accuses Claire of being selfish when it comes to Julie. Lani learns that JJ encouraged Roman to offer her a permanent job.

Chad vows to do what is right regarding his feelings for Abigail and Gabi. Valerie keeps Eli’s identity a secret as the family attends an event. Brady is unable to persuade Chloe to give Nicole custody of Holly.
Lani talks to Ciara about her breakup with Theo. Later, JJ asks Lani out.  Also, Lani meets Eli…

Chloe makes a mysterious call to Belle while Brady tries to warn Nicole about Chloe moving out of town. JJ and Lani agree to a date… and Gabi overhears. Rafe shows up and demands Gabi tell the truth, but they are interrupted by Eduardo. Rafe learns from Marlena that John has taken a secret ISA mission.

Rafe persuades Hope to make a romantic meal with him. Nicole ends up in supportive Brady’s arms and Deimos confides to Victor his plan to win back Nicole’s broken heart. Sonny then goes to Deimos and expresses his rage at being kidnapped and beaten.

Deimos puts plans in motion to get Holly back while Brady, trying to keep Nicole sane, distracts her. Brady fills her in about Eric being pardoned from prison. Nicole reels at this news. Chloe receives a visit from Anne, who is seeking advice on Lucas. Gabi and Abigail put the situation with Chad behind them.

Nicole makes a hasty decision as Chloe, Deimos and Brady question what comes next. Chad and Abigail spend an evening together. Sonny informs Brady of his plans to take on Deimos. Paul comes across edgy Sonny and worries that Sonny’s going to get himself in trouble.

As Chad and Abigail continue to rebuild their connection, Kate urges Gabi not to give up so quickly on Chad. Kate hears Eduardo’s heartfelt plea to give him another chance.  After visiting Chad, Hope arrives at the station to learn that she has been reinstated.

Nicole fears for her life. Chloe goes to Hope, wants some info about Nicole’s whereabouts and the kidnapping. Brady confronts Dr. Lee about what he knows about Nicole. Eric tells Jennifer that he will not accept a job at the Horton Center. Claire, upset her music career/online fame has taken a dive, lashes out.

Nicole thanks Tiffany for her help.  However, Tiffany sneaks in with her boyfriend Tobey and they steal from Nicole!  Kayla tells Hal his daughter Jade is being so generous to donate a part of her liver to him so that he can live and he should be more appreciative.

Lucas and Justin are concerned when they realize that Adrienne is once again handling her chemo solo while Anne checks up on Adrienne. Anne apologizes to Lucas about their awkward moment.

After his surgery, Hal develops a devastating complication. Jade is shaken by this news. Abigail conducts some DiMera business with Dario at Club TBD. Chad enlists Andre’s help in tracking down Deimos’s contacts. JJ and Lani learn that Raines is the new police commissioner.

Hal puts Kayla’s life in danger. Finally, a weak Jade emerges, and does her best to talk her father off the ledge. Chad makes a move to dismantle Deimos and his empire, as Sonny and Paul try to find out what they can about Deimos’s connection to the stolen antiquities.

Eli forces Valerie to tell Julie the truth. Valerie tries to explain, but Julie is reeling and despite the explanation.

A shocked Joey overhears Steve and Kayla talking about life altering news. Brady helps Nicole with the aftermath of being robbed. Maggie privately asks Chloe to be reasonable. Deimos pours out his love for Nicole to Maggie. Kate visits Eduardo to return the extravagant gift he bought her.

A jealous Deimos makes one last heartfelt plea to Nicole to accept his help and his love. Jennifer runs into Marlena and tells her about the offer she made to Eric to work at the Horton Center and both women share their worry about his isolation.

Nicole hides out while Brady heads off to get the funds they need. Brady runs into Victor, who becomes frustrated and angry that Brady is once again involved with Nicole. Sonny thanks Chad for stealing Deimos’ stolen artifact business. Sonny tells Paul he needs incriminating evidence against Deimos.

Abigail and Chad hold a press conference to publicize tonight’s Salem High charity event. The Hortons have a get-together to welcome Eli to the family. Ciara finally tells Claire about her feelings for Theo. Ciara thanks Hope for her advice, telling her mom she’s glad she said something to Claire.

Deimos, still hurting from Nicole’s absence, is not too happy when Rafe shows up, asking questions about missing/stolen artifacts. Abigail has found Chad and Gabi in an awkward moment. Kate shows up and Chad expresses again how he’s in love with two women.

Deimos has focused his attention on Chad, and he swears he’ll have his revenge. Kayla and Joey check on Jade in the hospital and go over the liver transplant and Hal’s episode.

Brady and Nicole learn Holly is sick… which throws off their plan and puts them in tense encounter. Kate sees Chloe and Eduardo together and lays into them. Jennifer meets with Eric. Julie suggests that Ciara admit to Theo how she feels about him… so she decides to write him a letter.

Chad finally tells Abigail that he has feelings for Gabi. Gabi gets ready for the charity event and clashes with Dario as they discuss their inability to be with the ones they love (Chad and Abigail). Ciara catches Claire and Theo in an intimate moment… and ends up ruining it.

As Brady settles Nicole into her new home, Deimos confronts Chloe and Eduardo over their new alliance.  Eduardo tells Deimos to get lost. Chad and Gabi agree to stay out of each other’s lives and both are heartbroken at the prospect.

Chad and Dario panic when they realize Abigail is missing. When he arrives, he finds Abigail and Gabi in a bad situation. Sonny overhears Deimos on the phone and realizes that Chad is in imminent danger. Edgy Dario discovers that Gabi left the party early and comes to realize that she also seems to be missing.

Chad is forced to make an agonizing choice between Abigail or Gabi.  JJ, Paul and Dario arrive. Meanwhile, Sonny suspects that Deimos is behind the mysterious disappearance of Abigail, Gabi and Chad and goes looking for him. Deimos is pleased to observe Chad’s despair.

Steve and Kayla trace Steve’s son with Ava to a diner in Arizona, but learn from the manager that he fired Tripp. Joey brings Jade home from the hospital.