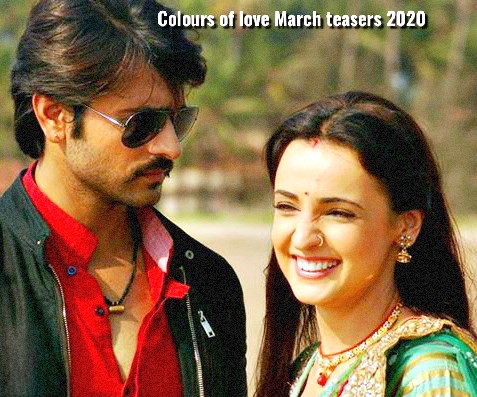 Colours of love March teasers 2020: Rudra and Parvati get attacked by a man in Jaipur. Who is after their lives?

Tejawat wants to strike a deal with Rudra. He wants Parvati in exchange for his mother. Will Tejawat get what he wants?

Parvati is sad when she realizes that she will have to leave Rudra and go away to fulfil her promise made to Lord Shiva. Is she about to confess her love to him?

As Rudra and Parvati travel on the train, Parvati leaves and goes to fulfil her wish to Lord Shiva. Will Rudra leave his home to look for her?

Rudra finds Paro and tries his best to console her with regard to what she is going through. Meanwhile, Laila hits one of Tejawat’s men and gets ready to flee with Rani.

Rudra puts his life on the line and stands on the railway track as he pleads with Parvati not to leave. What will she do?

Rudra has reached his limit and wants to tell Parvati how he feels about her. Will he manage to get everything off of his chest?

Rudra is about to come face to face with Rani. How will he react to this?

Rudra goes to the office to taunt his mother with regard to her actions and deeds and how she has impacted his life. Will Parvati be able to console and calm him down?

Danveer comes clean about speaking to Rudra’s mother every time with regard to Rudra’s wellbeing. Meanwhile, Mohini wants Samrat to get remarried.

Parvati brings Mala into the haveli which completely angers Rudra. Will his family give her a warm welcome?

Mohini takes her opportunity during supper to humiliate Mala for her actions during Mohini’s proposal and marriage. What is she about to do?

Parvati is tired of drama and decides to sleep with Rudra at the courtyard. Meanwhile, Mala is ready to leave when she realizes that everyone is unhappy because of her.

Just as Mohini plans to leave the house, she finds out that Mala has already left. How will everyone feel about this?

Parvati and Rudra find Mala as she gives Mala an ultimatum – come back home with them or stay where she is. What will she choose?

Maithili asks Parvati about her Mangal Sutra, but it seems as though Rudra has not gotten is as yet. How will she deal with this situation?

Rudra defends his mother when Mohini tries to belittle her. Meanwhile, Mala tries her best to get close to her son.

Rudra is about to express his love for Parvati when he arranges flowers and candle lights just for her. How will she feel about this?

Rudra arrives with tickets for his honeymoon for himself and Parvati, but Parvati feels as though this is the wrong time. How will he react?

Dilsher slaps Rudra for belittling his mother and stands up to Mohini, making her acknowledge that she is also responsible for what happened 15 years ago.

Parvati tries to talk to Rudra with regard to his parents, whilst Dilsher is about to realize his biggest mistake. What could it be?

Mohini manages to convince Samrat to go with her but it seems as though she is ready to fix his proposal. How will he react when he finds out?

The lights go out and Parvati is left alone, until someone else approaches her from behind. Who could it be?

Maithili confronts Mohini about her trying to remarry Samrat. Meanwhile, Rudra disguises himself to find out who attacked Parvati.

Rudra manages to catch the assaulter. Who could it be? Meanwhile, Rudra’s birthday seems to be arriving but everyone pretends as if they do not remember.

Rudra gets a surprise welcome from his family when he comes home for his birthday, but it seems as though everything may change when one of his brothers wants to kill him.

Rudra and Parvati get attacked by a man in Jaipur. Who could he be?

Sunehri gets attacked by the same man who had assaulted Parvati whilst the family arranges their new home.

The man out to avenge Rudra has managed to enter Rudra’s home in disguise. Will Rudra notice something fishy about him?

Rudra is on a mission to find out more about Shantanu. Meanwhile, Shantanu flirts with Sunehri and uses his charm to his advantage.

Shantanu gives Parvati a little hint about one of her past tragedies. Meanwhile, Paro receives a widow’s dress. Who could it be from?

Rudra’s fear and anger causes him to get suspended when he is asked to see a psychiatrist. Will Shantanu’s malicious plans go accordingly?

Shantanu attacks Parvati when she is alone and shoots himself in the shoulder to make it seem as though he was protecting Parvati. Will Rudra now trust him?

Parvati finds out that Samrat was about to be forcefully married. Meanwhile, Mohini manipulates Maithili into believing a lie.

Mohini is filled with anger when she finds out about Sumair’s marriage. Is Sumair about to harass his new wife?

Rudra thanks Shantanu for all his help but Shantanu’s anxiety begins when Rudra finds his bullet in their wall. Will he find out the truth?

Shantanu manages to cover up when he accepts the blame of firing the BSD gun. Meanwhile, Shantanu gets good news from Sunehri. Has she changed her mind to marry him?

Mohini’s money and jewellery seem to have been stolen. Will Parvati find out who Shantanu really is

Shantanu has Parvati at gunpoint, ready to take her life. Will Rudra manage to save her life this time? Meanwhile, Rudra and the family are about to receive some good news.

Mohini wants to have a child so that the property can be left for him. Meanwhile, we take a few months leap to a new beginning for the Ranawat family.

As he is covered in blood, Rudra says his goodbyes to Parvati as she takes her last breath. Will Dhruv manage without his mother?

We take another leap as we celebrate Dhruv’s new birthday, but everything changes when he questions everyone about his mother.

It seems as though Rudra is being haunted by Parvati’s memories when Dhruv questions his father and believes that Myrha is his mother.

Dhruv seems to be convinced that Myrha is his mother and decides to go to her hotel and not return to his home. How will Rudra react to this?

Next: April on colours of love