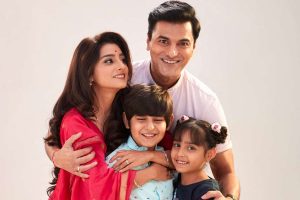 Broken Bond is a family drama series focussing on the lives of Shubhra, Kuldeep and their kids Roli and Rishi. After 10 years of their marriage, cracks start developing in their relationship. The children take it upon themselves to reunite their parents, will they succeed?

this is a  story of A married couple who used to be in love and even got married without permission of their parents, they have two kids a boy and a girl. 10 years down the line, the husband cheat on wife with a girl named Sam. When the family finds out about it, the son goes in depression, the wife tries to make her own name as she has sacrificed everything for her husband and kids.

Their kids Roli and Rishi take it upon themselves to reunite their parents by playing one game after the another. Question now is will they succeed?