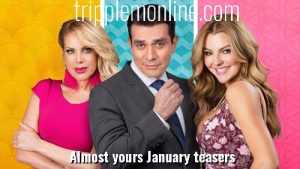 Antonio grew up in a poor, working class family and became a self-made successful and wealthy man. He’s married, has three children and wants to make sure they don’t have the same life he had growing up, so he gives them everything, which turns out to be a big problem as they become too privileged…

Monday 6 January 2020
Antonio seems to have it all: a successful job with a good salary, and a wonderful family. But he feels hurt when no one wishes him a happy birthday.

Tuesday 7 January 2020
When Elvis pulls out a gun in a jealous rage, Antonio calls the police. Meanwhile, Catalina is surprised when her credit card payment is declined.

Wednesday 8 January 2020
Antonio kicks Elvis out of the house. Gregoria gives Javier a job at the jewellery shop after Madonna helps him out by lying about his experience.

Thursday 9 January 2020
Catalina faints and is taken to hospital, while Antonio resigns from his position at the bank. There is a misunderstanding between Beto and Viviana.

Friday 10 January 2020
Catalina is shocked to see Johnny and Viviana kissing, and Antonio decides to put some strict household rules in place.

Monday 13 January 2020
Antonio suggests that Julieta sets up her own brand. Meanwhile, Beto hires Eduardo and Viviana to work at the cafeteria.

Tuesday 14 January 2020
Elton is angry when he learns that Don Paco kissed Gregoria. Catalina meets with her plastic surgeon. Antonio works his first day as a taxi driver.

Wednesday 15 January 2020
Julieta tells Antonio that she wants the two of them to be friends. Later, Viviana leaves home and asks Beto if she can stay with him.

Thursday 16 January 2020
Antonio is stunned when Catalina kicks him out and asks for a divorce, while Madonna ends her relationship with Tomas. Paco sends Gregoria flowers.

Friday 17 January 2020
Violeta and Azucena reconcile their friendship. Meanwhile, Catalina comes up with an idea for how to get financial help from her friends.

Monday 20 January 2020
Catalina is certain that Antonio and Julieta are more than just friends. Elvis has an accident and ends up in hospital, where he asks to see Julieta.

Tuesday 21 January 2020
Paco, desperate to prevent Julieta and Antonio from getting together, encourages Elvis to try and win Julieta back. Elvis agrees without hesitation.

Wednesday 22 January 2020
Julieta tells Antonio again that they can only be friends, leaving him with a broken heart. Fonsi fights over two men who are trying to rob Leticia.

Thursday 23 January 2020
Johnny tells Viviana to stay away from Beto. Meanwhile, Violet and Azucena talk and realise that Eduardo has been deceiving both of them.

Friday 24 January 2020
Catalina tells her children that the situation with Antonio is unbearable and cannot be fixed. Viviana deduces that there’s another woman involved.

Monday 27 January 2020
Antonio cries when he finds Catalina on the verge of ending her own life. Meanwhile, Violeta tells Eduardo that she is pregnant.

Tuesday 28 January 2020
Viviana and Lupita both beg Catalina not to leave Antonio, without success. Catalina arrives at a hotel, where Mauricio is waiting for her.

Wednesday 29 January 2020
Elvis asks Julieta to marry him, but she doesn’t accept his proposal. Meanwhile, Catalina is shocked to learn that she is going to be a grandmother.

Thursday 30 January 2020
Elvis reminds Gregoria that she made a vow of fidelity to his late father. Meanwhile, Azucena asks Beto if she can work as an intern at the cafe.

Friday 31 January 2020
Javier tries, unsuccessfully, to explain to Gregoria why he deceived her daughter. Meanwhile, Viviana ends her relationship with Johnny.