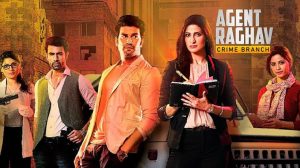 Agent Raghav Zee world is a crime series that showcase the insight and intelligence of Raghav in solving tough crime incidences and finding out clues in places that seem impossible. Agent Raghav will be starting soon on zee world.

Agent Raghav Sinha is a handsome guy with charismatic personality and exceptional skills of observation and deduction. He has a very high IQ and is an expert at reading a person’s mind and body language. Raghav picked up these unique skills from his father, who was a renowned psychiatrist. However, at the age of 10, Raghav witnessed his father’s murder at the hands of one of his own clients. The killer was untraceable, and even the police had to give up after some time. Ever since then, it has become Raghav’s mission to find the killer and avenge his father’s death. Raghav was initiated into Crime Branch Special Unit because of his special, skills and he has time and again proved his worth by cracking the most challenging cases and bringing the criminals to justice.

Agent Trisha Deewan (Aahana Kumra) is the leader of the Crime Branch Special Unit. Her goal is to build up her career as a cop but her parents want her to settle down in life by marrying a nice guy. Agent Trisha & Agent Raghav, despite their opposite personalities, fell in love with each other but never voiced out. Agent Rajbir (Danish Pandor) and Agent Bikram (Jason Tham) are his friends. They share a special bond as well as solving cases. Their goal is to help the team as much as possible using their skills. Dr Aarti is the forensic scientist working under CBI. With her forensic skills, she discovers the things may happen on the crime spots. .

The show also deals about the dynamics shared by Raghav and Trisha, where they both are strongly attracted to each other & share an amazing bond of trust.

In the last episode, it reveals Agent Raghav’s father’s killer. It is the CBI Crime Branch Chief, Dilip Chauhan. He tries to kill Raghav, but Bikram jumps in front of the bullet and dies. Then the chief escapes and leaves a tired Raghav promising to get him one day..