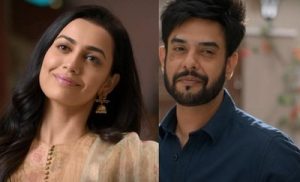 A New Life on starlife examines the life of the Sakhujas and how they adapt to the COVID-19 Pandemic. It shows the unfortunate circumstances they were forced to deal with. However, Pritam is a stranger whose life gets entwined with theirs, but even he has a secret of his own…

The story opens with the middle-class Sakhujas who are mourning the sudden demise of their eldest son, Karan Sakhuja. Karan lost his life serving as a health-warrior and treating the COVID-19 affected patients. Amrita, Karan’s pregnant widow hides her sadness and tries to lighten up the mood of her family. However, the Sakhujas bad luck never ends with their sole bread-winners Guneet and Angad losing their source of income. To make matters worse, Krishnakant Sehgal, the Sakhujas family friend who turned rich through his sanitizer business and had promised his daughter Meera’s hand for Angad, breaks the alliance as he feels the Sakhujas no longer match his status.

While the Sakhujas are facing a complete distress both emotionally and financially, there enters Pritam Choudhary in their lives as their tenant. Pritam has a mysterious identity revolving around the crime world and is himself holding a dark and tragic past. When Pritam agrees to pay the huge amount of rent which the Sakhujas demand. The Sakhujas are overjoyed and decide to keep him much to the dissatisfaction of Amrita, who has met Pritam even earlier in many uncanny situations and strongly feels that he is not the right tenant. But when Pritam saves Angad’s life, Amrita agrees on keeping him as their tenant. Initially, Pritam is constantly bugged by the overly-caring attitude of the Sakhujas which always cause interference with his work. But as time passes, he starts empathizing with their miserable situation and develops a strong pity and respect for Amrita which gradually leads Pritam getting attracted towards her.

However, at that moment Pritam’s past involving his wife, Vishaka and son, Rahul returns to his life which is when Pritam Choudhary is revealed to be a valiant IPS officer. Despite having faced a lot of tragedies in life, Pritam never stops himself from fulfilling his duties. With the help of his seniors he takes the identity of a drug peddler along with his colleagues and friends Nitin and Monty to entrap all the treacherous drug mafias. After the birth of Ansh, when Pritam gets more emotionally involved with the Sakhuja family and nurtures a stronger liking for Amrita, he also gets to face one of the treacherous drug mafias, UD.

The series ended with Sakhujas’ Christmas celebration. Pritam dressed as Santa brings Karan’s ashes for the Sakhujas, who finally performed his last rites.

More information on A New Life.