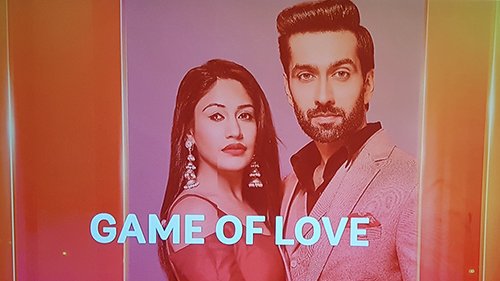 More drama at the Obeiro Mansion this September on Game of Love Starlife series.

Anika is devastated as Shivaay refuses to accept her as his wife and calls her his mistress. Chachi ousts Anika from the house, while Omkara and Rudra stand by Anika.

Shivaay asks Anika to show him proof of her claim that she is his wife. Omkara asks Shivaay to swear by Priyanka that he is not married to Anika. Omkara and Rudra conduct the housewarming ceremony for Anika.

Rudra and Omkara’s concern towards Anika agitates Shivaay. Anika feels delighted as Gauri visits her. She also gives a fitting reply to Shivaay, leaving him shocked.

Anika berates Shivaay for his actions and threatens him to accept her as his wife. Tia gets annoyed as Shivaay and Anika sit next to each other and perform a ritual.

Omkara asks Shivaay to do a task blindfolded. He has to identify his wife from among the ladies present at the puja. Later, Shivaay feels that Anika’s claim about Daksh may be true. Priyanka regains consciousness.

Daksh rejoices as Shivaay transfers Priyanka’s shares to his name. But he is shell-shocked when he attends Shivaay’s press conference about the same. Later, Shivaay apologises to Anika.

Shivaay kicks Daksh out as his true colours get exposed. Priyanka unveils the plan she made along with Shivaay and Anika to expose Daksh. Later, Anika goes missing.

Shivaay decides to pay the price for his mistakes and punishes himself. He gets beaten up by the goons and seeks forgiveness standing outside Anika’s house. Will Anika forgive Shivaay?

Shivaay gets drenched in the rain and faints. Anika sympathises and forgives him. Shivaay asks Anika to be friends with him. Shivaay shows concern towards Anika when he learns that she is unwell.

Anika receives a series of surprises from Shivaay on the occasion of her birthday. However, Anika remains shocked as Shivaay unveils his last surprise!

Shivaay parts ways with Anika after divorcing her. Gauri, Omkara and Priyanka try to reunite Shivaay and Anika while Shivaay tries to patch Nikhil and Anika’s relationship.

To convince Nikhil’s mother to get Anika and Nikhil married, Shivaay offers to pay for their wedding and also arrange a job for Nikhil. Later, Shivaay proposes to Anika on behalf of Nikhil! How will she react?

During Anika’s mehendi ceremony, Nikhil is miffed to see Shivaay’s name on her hand. Nikhil and his mother confront Anika for wearing sindoor. Will Shivaay let Anika reveal the truth to them?

Nikhil confronts Anika after watching the video of her marriage with Shivaay. Shivaay apologises to Nikhil and convinces him to marry Anika. Later, Nikhil makes a shocking revelation.

Shivaay helps Anika overcome her aquaphobia. The couple is blissfully happy in romance in the pool. Anika is in a fix about marrying Nikhil. Omkara advises Anika to save her and Shivaay’s marriage.

Anika tells Nikhil to call off their wedding and conveys her decision to Shivaay. Anika and Shivaay seek Jahnvi and Tej’s blessings. Anika challenges a reluctant Shivaay to apply haldi on her.

Omkara and Gauri come up with a plan to bring Anika and Shivaay closer. Later, Anika gets locked inside a safe.

Anika burns her hands just to ensure that Shivaay performs the haldi ceremony with her. She accompanies Shivaay as he decides to sleep on the floor. Shivaay wakes up with a shrill after having a nightmare.

With Nikhil’s help, Daksh traps Anika in his evil plan. Anika strives to escape when Daksh sets out to kill her. Shivaay tries to reach out to Anika. Can he save her?

Daksh assaults Anika, knocking her unconscious. He demands Shivaay to jump off from a tall building if he wants him to spare Anika’s life. Shivaay obliges Daksh!

Anika’s condition deteriorates when her oxygen supply gets disturbed due to a power cut. Shivaay gets electrocuted while rectifying the power connection. Daadi asks Anika to leave the mansion!

Shivaay brings Anika back to his mansion after Daadi sends her away. Daadi criticises him for defying her. Tej is also displeased with Shivaay. Meanwhile, Anika asks Shivaay if he will accept her as his wife.

Shivaay is excited to meet his friend Mohit, a renowned magician. Mohit leaves him awestruck with his tricks when he visits him with his wife, Nancy. Anika learns that Mohit had once saved Shivaay’s life

Mohit and Nancy spend some romantic time with each other. Later at night, Nancy accidentally falls into the swimming pool.

A burglar breaks into Shivaay’s mansion and breaches the security system. Shivaay is annoyed as Anika calls Mohit’s magic to be fake. Later, Anika herself tries to learn magic.

Anika is amused to witness Mohit’s magic tricks. Shivaay feels disgusted as Nancy tries to get intimate with him during Mohit’s absence. Anika visits Shivaay at the same time. Will she understand the situation?

Nancy tries to portray Shivaay in the bad light by getting intimate with him. Disgusted, Mohit leaves the house.

Shivaay teaches Anika to fold a sari and later, wardrobe management. Jahnvi tells Shivaay that she has gifted a gown to Anika. Later, Anika charms Shivaay, wearing the gown.

Shivaay hosts a masquerade ball to honour Mohit and Nancy. Shivaay and Anika have a romantic dance. But, she is mighty upset at the party.

After Mohit clarifies Anika’s doubts, she apologises to Shivaay. The couple is blissfully happy in romance. Shivaay decides to tell something important to Anika.

All hell breaks loose as Shivaay wakes up to find Nancy’s dead body next to him while the others are aghast witnessing the same.

Mohit accuses Shivaay of Nancy’s murder. Post her investigation of the case, Bhavya makes a shocking declaration. Will the Oberois stand by him?

Shivaay is shocked as he watches the CCTV footage in an attempt to find Nancy’s killer. Bhavya tells the Oberois about the forensic test results.

The police come in search of Shivaay in order to arrest him for committing Nancy’s murder. Will Shivaay surrender himself?

Shivaay sneaks into a room to find more clues but gets hit on his head. The police catch hold of Shivaay and arrest him, while his family members are left surprised. Why?

Shivaay disguises as Majnu Singh Awara and brings Lord Ganesh’s idol to the Oberoi mansion. He cheers up an upset Anika in a unique way.

Shivaay searches the crime scene for clues about Nancy’s killer. He uses Anika’s phone to know more about Nancy.

Anika and Shivaay share a romantic moment. Tej makes a shocking announcement regarding Shivaay to the media. Omkara and Rudra learn Majnu’s identity.

Shivaay decides to speak to Mohit about transferring his wife’s property to his name. Later, Shivaay learns a shocking truth about Nancy!

Mohit tries to mislead Bhavya regarding Shivaay’s motives of killing Nancy. Meanwhile, Anika sings and dances with Majnu aka Shivaay.

Mohit assaults Anika after she threatens to expose his misdeed to Bhavya. Shivaay wants to prove himself innocent. Can he find Nancy?

Mohit is determined to trick Shivaay and escape. However, Shivaay brings Nancy in front of everyone and tries to expose Mohit’s misdeed.

Shivaay exposes Mohit before the media and gets him arrested. Later, Shivaay is tensed as Mohit plays with Anika’s life.

Anika is overwhelmed as Shivaay accepts her as his wife and makes her wear the mangalsutra. Further, Shivaay learns his enemy’s identity!

Anika receives gifts from the family members at her Mooh Dikhai ceremony. Tej plots against Shivaay and later makes a disturbing revelation to him.

Shivaay’s family members feel suspicious as Shivaay and Tej try to hide something from them. Later, Shivaay fires Tej from his company.

In a bid to stop Tej from telling his aides to kill Omkara and Rudra, Shivaay takes a drastic step. What will be the consequences of his move?