Over 101 million followers of Kylie Jenner, a global fashion icon and owner of Kyle cosmetics, were treated to both an apology and the news of her recent birth.

Kylie had gone on a social media sabbatistical in late December last year amidst speculations of her pregnancy.

Her family, the popular and influential Kardashians neither confirmed nor reputed the news, but a post on her instagram page on Monday, the 4th of February confirmed all speculations that she was indeed pregnant.

The proud mom also informed her followers that she had successfully put to bed on the 1st of February to a baby girl, amidst gushing over her motherhood journey. 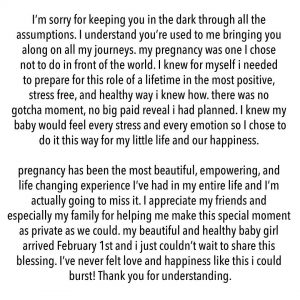 The father of the child is purpoted to be Travis Scott and congratulatory messages have not stopped to flood her timeline since the announcement.

The internet is also burning up with the news of Kylie’s baby girl.

Eedris Abdulkareem taught me to be a decent woman – Laura...