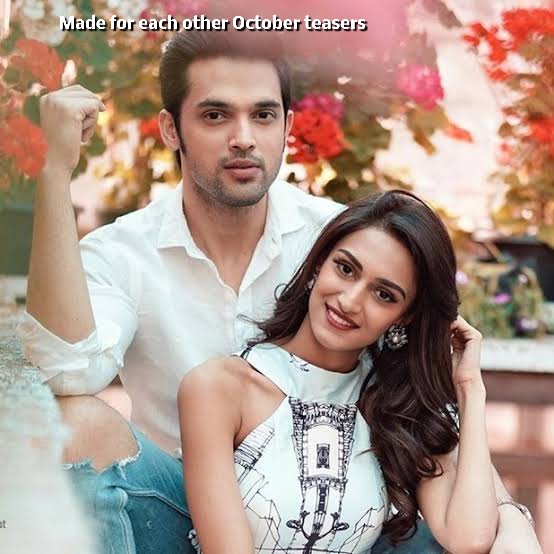 Made for each other October teasers. Anurag and Prerna are in a dilemma about their feelings for each other even as Komolika plot to keep them apart for ever. Prerna thinks that marrying Naveen for her family’s sake is the right decision. Meanwhile, Anurag dreams about her.

Made for each other starlife full story

Tuesday 1 October 2019
Episode
Anurag executes his plan against Naveen. Komolika tackles a guy who threatens to harm himself after she rejects him. Prerna gets back at Naveen. Why?

Episode
Prerna and Anurag come closer as they dance together at the party. Later, Naveen finds himself in a big mess.

Wednesday 2 October 2019
Episode
Prerna confronts Naveen about the lady with him in the photograph. The same lady arrives at the party and reveals her identity.

Episode
With a heavy heart, Prerna gets engaged to Naveen. Later, Anurag asks Naveen to stay away from her.

Thursday 3 October 2019
Episode
Shivani tries to make Prerna realise that she has feelings for Anurag and advises her to confess to him. Later, Anurag secretly meets Prerna.

Episode
Desperate to get married to Prerna, Navin decides to impress her. Later, Anurag learns a secret about Naveen.

Friday 4 October 2019
Episode 33
Prerna lands in deep trouble when Shivani does something unexpected. The Basus make arrangements for Laxmi puja while a group of thugs plan to rob them.

Episode 34
Anurag tries to make Prerna realise that Naveen is not an ideal match for her. He comes to her rescue when Naveen compels her to dance with him.

Saturday 5 October 2019
Episode 35
Anurag learns a shocking truth about Naveen and Madhuri. Meanwhile, Mohini and Nivedita find themselves in trouble.

Episode 36
Anurag confronts Prerna for avoiding him. The thieves rob Mohini and the others of their ornaments while Anurag seeks help from the police.

Sunday 6 October 2019
Episode 37
The dacoit points his gun at Anurag and decides to play a twisted game, Russian roulette. Prerna comes up with an ingenious plan to save the Basus.

Episode 38
Anurag rescues Prerna from the dacoit. The police arrest the dacoits. Anurag challenges to expose Naveen when he reveals to him that Madhuri is his wife.

Monday 7 October 2019
Episode 39
Ronita frantically chases Naveen’s car when she spots him in the market. Prerna’s mother puts an unexpected demand on Anurag.

Episode 40
Anurag admires Prerna. He hospitalises an injured Ronita after Naveen and Madhuri try to kill her!

Tuesday 8 October 2019
Episode 41
Madhuri speculates that Prerna might be in love with Anurag. Meanwhile, Anurag and Prerna spend some time with each other. Madhuri spots Ronita in Anurag’s room.

Episode 42
Anurag is dejected to witness Prerna dancing with Naveen on the occasion of their sangeet ceremony. Later, he confesses his feelings for her.

Wednesday 9 October 2019
Episode 43
Anurag and Prerna are in a dilemma about their feelings for each other. Ronita shouts for help when Naveen tries to kill her.

Episode 44
Naveen hides beneath the bed when Anurag visits the room. On seeing the marks on Ronita’s neck, Anurag suspects that someone tried to kill her.

Friday 11 October 2019
Episode 47
Naveen feels cornered when Ronati accuses him of cheating on her. Later, he tries to manipulate everyone against her and Anurag.

Saturday 12 October 2019
Episode 49
Naveen remains undaunted when Anurag confronts him. Prerna thinks that marrying Naveen for her family’s sake is the right decision. Meanwhile, Anurag dreams about her.

Episode 50
Shivani speculates the reason behind Prerna marrying Naveen after she finds the notice sent by Mohini. Anurag visits Prerna’s house for her haldi ceremony.

Episode 52
Prerna requests Shivani not to tell Anurag her real reason behind agreeing to marry Naveen. Meanwhile, Anurag tries to get Naveen and Madhuri’s marriage certificate.

Monday 14 October 2019
Episode 53
After gathering evidence, Anurag threatens to expose Naveen regarding his marriage with Madhuri. However, Naveen plots against Anurag to get rid of him.

Episode 54
Naveen does the unthinkable. Will Anurag manage to save the marriage certificate?

Tuesday 15 October 2019
Episode 55
Prerna agonises about Anurag’s critical condition, while Naveen shows his ugly face again. Will he get what he wants?

Thursday 17 October 2019
Episode 59
With just a few minutes away from the wedding, when Prerna refuses to cooperate, Anurag takes a shocking step!

Episode 60
Prerna and Naveen perform their marriage rituals while Anurag is shattered over his inability to stop the wedding. However, Naveen is in for a rude shock

Friday 18 October 2019
Episode 61
While Prerna finds herself locked in a room, Madhuri reveals a shocking truth about Naveen.

Episode 62
Naveen plans to escape from the wedding venue with an ignorant Prerna. Meanwhile, Anurag presents more evidence against Naveen.

Saturday 19 October 2019
Episode 63
Anurag discloses Prerna’s side of the story. Later, in an attempt to escape, Naveen crosses all limits.

Episode 64
Moloy extends a kind gesture towards Prerna. Nivedita instigates Mohini against Prerna, while Prerna and Anurag are lost in each other’s thoughts.

Sunday 20 October 2019
Episode 65
Prerna begins her first day at the office. Later, the situation worsens when she engages in a heated argument with Anurag.

Episode 66
After her romantic dream about Anurag, an excited Prerna sets out to confess her feelings to him. However, soon reality strikes!

Wednesday 23 October 2019
Episode 71
Anurag gives an idea to Prerna to tackle Ronit after she decides to bring him to the task. Meanwhile, Komolika and Ronit are hassled!

Next: Made for each other November teasers 2019

Episode 72
Anurag motivates Shivani to tackle the situation. Komolika again bumps into Prerna. Later, she assures her father of solving the problem.

Thursday 24 October 2019
Episode 73
Komolika asks Prerna to accompany her and Shivani to the police station. Elsewhere, Mishka tries to get close with Anurag.

Episode 74
Komolika insults Prerna’s parents and vows to make Shivani’s life miserable for troubling Ronit. Will Prerna give up so easily?

Friday 25 October 2019
Episode 75
Prerna and Anurag are lost in each other’s thoughts. Later, Prerna is determined to bring Komolika to task, while Komolika wants to outwit her.

Saturday 26 October 2019
Episode 77
While Prerna and Anurag contemplate confessing their feelings to each other, Komolika cooks up another storm.

Episode 78
Anurag and Prerna struggle to confess their feelings to each other. After seeing Prerna’s lipstick mark on Anurag’s shirt, Mishka consults Komolika!

Sunday 27 October 2019
Episode 79
While Mishika suspects that Anurag is dating someone, he and Prerna are stuck in the middle of a political riot.

Episode 80
The riots leave Anurag and Prerna dealing with chaos and dangerous thugs. Later, Komolika misinterprets Anurag’s intentions when he comes to her aid.

Monday 28 October 2019
Episode 81
Komolika speculates that Anurag is not interested in her and determines to create trouble for Prerna. Later, Mohini slaps Nivedita!

Episode 82
Prerna shares her agony with Shivani about Anurag considering her as a friend. Komolika intends to meet Anurag, while Mohini makes a shocking announcement to him.

Episode 84
Anupam criticises Nivedita. Despite feeling low, Prerna decides to attend Anurag’s engagement, while he is shocked to know that Komolika is Mishka’s sister.

Wednesday 30 October 2019
Episode 85
Envy of the attention Prerna is getting from Anurag, Komolika comes up with an idea to send her away. Later, an embarrassing situation brings Anurag and Prerna closer.

Episode 86
Komolika warns Prerna against spoiling Mishka and Anurag’s happiness. Later, something unexpected occurs when Anurag is about to exchange the ring with Mishka.

Thursday 31 October 2019
Episode 87
Prerna is dejected as Anurag gets engaged to Mishka. Further, after realising that he loves Prerna, Anurag sets out to confess his feelings!

Next: Made for each other November teasers 2019